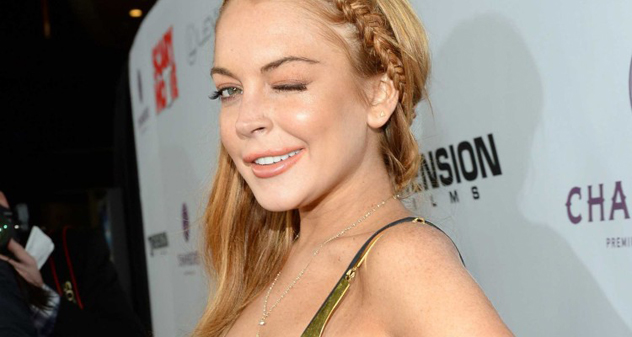 Some people just can’t catch a break… and then there is Lindsay Lohan. The former Disney starlet and current star of not a damn thing has been fucking up so long that some of you may know her best from her series of mug shots. Fans of those wonderful portraits may soon rejoice again as Lindsay might find herself “booked for another modeling gig” at the L.A. County Jail soon.

Fortunately, this time she didn’t hit anything with her car or steal jewelry from anyone, though her current troubles are related. In 2012, Lindsay was ordered to complete 240 hours of community service, which she was supposed to finish by November 2014. That didn’t happen, and she’s since been granted several extensions by the court for reasons that remain unclear to anyone with a sense of logic. May 28 is her new deadline and Lindsay reportedly still has about 115 hours of community service left.

Lindsay is running out of time and clearly needs my help. She cannot afford to make any more mistakes, so I want to go over a few other things that she may think will count as community service that actually won’t. After all, no one wants to see Lindsay go to jail; her hijinks in the outside world are just too great to lose!

Lindsay, you are clearly a menace on the road. You even did a Super Bowl commercial making fun of yourself. I think it’s safe to say that we are all better off without you behind the wheel of a car. Fortunately for you, you are rich or bad enough with money that you are willing to pay for a car service. That’s great! You should keep doing that, but it won’t count as community service.

We all have our vices. Some of us drink too much or do too much coke, or just party too much in general. You happened to do all of those things, Lindsay, which can be fun to watch. That’s what makes you, you! And while those things also make you the danger to the public that you are, sadly, stopping the drinking, drugs and partying will not count as community service, though it probably should in your case.

Those are two big ones that come to mind, though we should probably make a few more clear as well. In similarity to plays and fan meet-and-greets, doing low-budget movies, theater in the park, commercials, radio interviews, photo shoots, club and restaurant appearances or attending red carpet events all will not count as community service. Wearing clothes and jewelry given or loaned to you by designers will not count as community service. Giving your personal assistant the weekend off doesn’t count either. Basically, if you want to claim something is community service, it has to at least be done in service to the community. It’s right there in the name!

I hate to say it, Lindsay, but I think you might just have to bite the bullet and clean up garbage on the side of the highway with the rest of the criminals. I’m sure they can find the perfect job for you. I saw a video of you wielding a pair of hedge clippers and it looked crazy dangerous, so maybe you can sweep or something.

It won’t be so bad. Just think of it as research for your next big role. It’s about a former star that got so washed up that even Herbie the Love Bug wouldn’t fuck with her anymore. After her career tanks, she gets busted by the cops for a bunch of dumb shit and ends up on the side of the road in a prison cleanup detail sifting through garbage, searching for the meaning of life.