Living In The Clouds 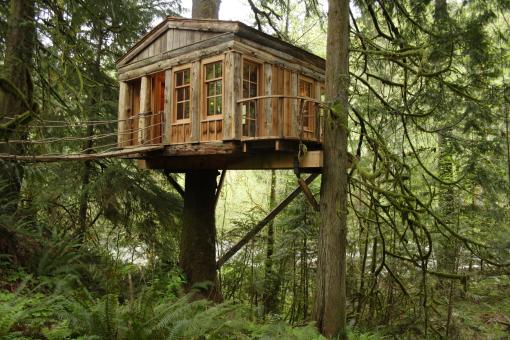 Did you know that Animal Planet is still on the air? I figured after the Crocodile Hunter got his and Planet Earth made its 200th showing, we would be done. I mean, I love animals just as much as the next guy, but I think that’s what YouTube is for. You go in, get your cute puppies or piano cat fixes and you move on about your business. Yet somehow, despite this easy access to newborn baby panda flix, Animal Planet lives on as the runt of the Discovery Channel litter.

Or at least that used to be the case. Imagine my surprise a few weeks ago when as I was flipping through the TV channel guide and found myself stopping on Animal Planet for something that actually looked good. I scrutinized the guide to assure myself that this was no error. Animal Planet had finally found the teat and all it took was a show that didn’t have much to do with animals to get there.

This triumph of modern entertainment and only hope for Animal Planet is called Treehouse Masters, and it’s fucking sick (Discovery, feel free to quote me on that)! As the title may suggest, it’s a show about building treehouses, but these aren’t your average, everyday tree platforms that you and your brother broke your arms falling out of as kids. This is grown folks shit! These people are dropping between $80,000 and$200,000 for, basically, a one-bedroom house in a tree; and it’s worth every penny, in my book.

The show itself is somewhat repetitive. How much shit can happen when you’re building a treehouse, after all? Every episode begins with Pete Nelson, the treehouse master, getting a call from some sort of eccentric potential client who wants to pay him bank for the dopest treehouse ever. This is also the time for Pete’s dog, Chica, to make a cameo giving Discovery Channel justification for the show’s placement on Animal Planet.

Once the deal is made, Pete flies off to meet Money Bags McBank, whom he will soon tell that the dream tree they had in mind sucks goat balls and is (almost always) dying. From the looks on their faces, you can tell that most of these people have never been told no before. Fortunately, Pete always manages to find a tree that turns out even better than the one the customer originally wanted anyway.

The process for tree selection can sometimes be exhausting. Pete crashes through the forest on the hunt for a tree, leaving the customers stumbling behind him. Once he finds what he wants, Pete presses his forehead against the trunk of the tree and loses himself to the Tree Gods for a moment before snapping to, hugging the tree and scrambling up its branches to see the view. Once he is able to pull himself down, and the clients catch up, he sketches out his idea, and gets the ok to start.

Thanks to the magic of television, the rest of the crew arrives seconds later with half of the shit already built. As Pete will remind you in every episode, the trick is making it all fit once you get it up in the tree. Of course, Pete is a treehouse master, so he doesn’t sweat that shit too much. He always manages to fix the problems that arise, except for one.

In every episode someone calls him away in the middle of the job to go make some minor repair on their treehouse and Pete gives you a tour in the process. Pete is a treehouse junkie and will drop everything and leave the crew behind to go see another treehouse, even if it’s across the country.

It must not be that big of a deal though, because the crew always seems to finish on time. When the tough shit comes up, Pete manages to make it happen, and blows everyone’s expectations away in the process. The man has built main houses, guest houses, play houses, music studios, writer’s retreats, day spas and even a brewery… all in the trees!

Here, you’ve been drinking and brewing your beer on the ground, like an idiot. It’s time to open your eyes to the future, and that future involves you living in a tree. You may laugh now, but global warming is a real thing. When the flood waters come, we will all be clinging to trees for dear life. The smart people out there, like Pete Nelson, will be sitting pretty on lakefront property in their treehouse houseboat sipping on a brew they made themselves, while enjoying their back porch Japanese soaking tub, and working on the next great American novel. How do you want to be remembered? Call Pete Nelson and start investing in your future today!