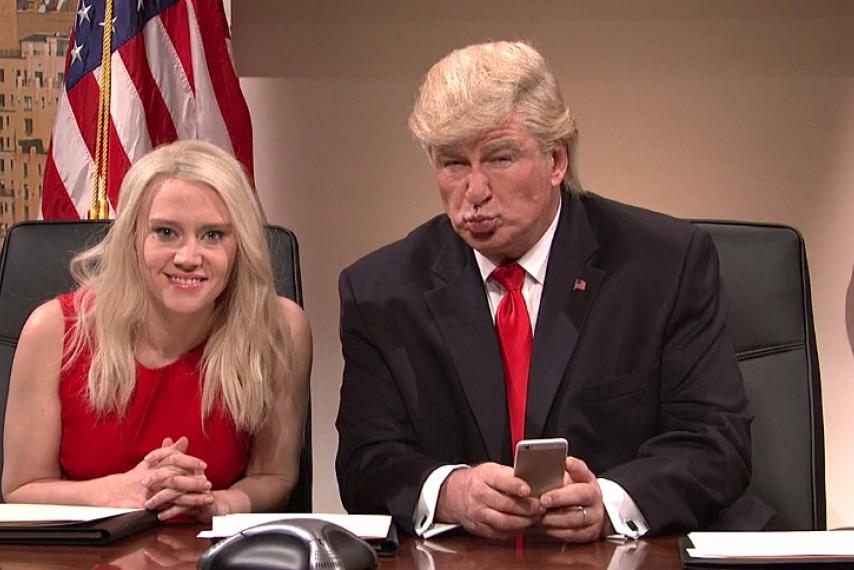 It seems to be the rite of passage for pop culture obsessed Americans to proclaim that Saturday Night Live sucks now. It gives you a level of distinction, I guess, to say something along the lines of, “Who’s even in the cast any more?” or, “I just caught a minute of it the other night by accident and said, ‘This isn’t even remotely funny.’” And maybe it’s true. Maybe it does suck now. I work late nights on Saturdays, and I never get to watch the show anymore. But honestly, I’ve been hearing the same song and dance since the ‘90s, from people who would go on and on about how the older casts were so much better. Jan Hooks was no Gilda Radner. Phil Hartman was no Dan Aykroyd. I guess nowadays you could say Colin Jost is no Dennis Miller (and thank God for that). But nevertheless, the show persists, now in its 42nd season (at least I’m younger than something), and it would seem that so far the only thing the current occupant of the White House has made great again is SNL. In fact, its ratings are the highest they’ve been in 20 years, according to Marketplace.org.

If you haven’t seen Melissa McCarthy’s impression of Sean Spicer to open the Feb. 11 episode, you really need to. McCarthy’s hilarious when she’s just doing her usual thing, but in this sketch, made up to bear a remarkable resemblance to our esteemed press secretary, she just reaches another level of glorious absurdity. She explains extreme vetting procedures to the “dumb babies” of the press using dolls, advertises Ivanka Trump’s clothing line (even does a high-leg kick to show off a pair of heels) and attacks a member of the press using a mobile podium, which made me do a spit-take.

Another clip from the show features Alec Baldwin doing his now trademark impression of our 45th President, where he takes the three justices of the U.S. Court of Appeals for the Ninth Circuit to The People’s Court in an attempt to get the halt on the travel ban overturned. Though the sketch is a bit uneven and preachy, it still has its good sight gags, like when shirtless Vladimir Putin shows up as a character witness, and when Cecily Strong as an exacerbated Judge Milian says to Baldwin’s Trump, “You’re doing too much … I want one day without a CNN alert that scares the hell out of me.”

It’s the weariness of the remark that resonated the most with me. It hasn’t even been a month yet, as of this writing, and it’s like it’s never going to end. I’m afraid I’m getting a dose of what I asked for, honestly. I’ve written before that I used to watch storms and always hoped they get worse, and now it seems it’s actually happening. I can’t really handle the constant state of anxiety, the constantly talking about it, the constantly writing about it. And the crazy part is nothing really bad has happened yet. I’m not talking about the authoritarian-style executive orders that seem to be flowing out of the White House nonstop. We’ve seen the checks and balances of our judicial system at work with the decision to halt the travel ban. But I mean something really bad. Like, a crisis that has nothing to do with politics, like a Katrina-type storm or a legitimate, horrific terrorist attack on U.S. soil, and not just an imaginary one like the Bowling Green Massacre (which is horrific in an entirely different way). What are we going to do then, when a major earthquake hits some liberal hotspot like, say, the Bay Area or Los Angeles? What’s the response from Washington going to be like? Is it going to be a tweet that just says, “Sad” … ?

I’m sick of worrying about it, honestly, but if there wasn’t this, what else would there be? Another clip from the Feb. 11 show featured Blake Bennett as CNN’s Jake Tapper and Kate McKinnon as a fatally attracted Kellyanne Conway. In the sketch, Tapper returns home after wrapping an episode of State of the Union to find a dangerous and seductive Conway waiting for him, upset that she wasn’t asked to be on the show. The sketch is absurdly funny, but it’s also a bit frightening (though perhaps not as frightening as Conway’s actual appearance on The Lead with Jake Tapper on Feb. 7). The sketch shows Tapper struggling with his desire for truthful reporting, but seduced by the enthralling media shistorm whose eye is currently firmly affixed over 1600 Pennsylvania Avenue. In the end, Kellyanne gets her way, but falls out of Tapper’s apartment window and lands in a twisted, broken mass on the sidewalk. This gave me a sense of cathartic relief. How easy it would be if it could just end like that, in some grave, definitive thud on the concrete. Then I could go back to my regular life and start to forget this ever happened. But then, with the aid of CGI, Conway rises, her joints folding back to their regular shape. At the end, McKinnon smiles at the camera and delivers a woeful forecast for the years to come, “See you on the news.” I know I should have been laughing. The sketch was really funny, but at the same time I couldn’t. Like I said, it hasn’t even been a month. After four years of all of us at each other’s throats, how much of a regular life are we going to have to go back to?