One Flu Over the Cuckoo’s Nest 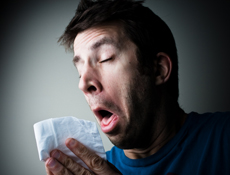 Life is a fragile thing. There was a point last week when I didn’t think these words would ever make it down on paper. Hell, two days ago, I wasn’t even sure if I would make it from my bed to the toilet, let alone put together a coherent thought. A particularly virulent strain of the flu took hold of me last week and appeared ready to ride my pale horse carcass to usher in the apocalypse. The following is an account of the six days it took me to reenter the land of the living.

Day One
Something wasn’t right. It was cold and raining, yet here I sat sweating through my clothes. Work was inescapable that day, which meant that I had to repeatedly explain to clients why I couldn’t shake hands with them, as I thought I was coming down with something. Some demanded it anyway; pity those poor fools. The day went by without too much discomfort. I was aided by the delicious Romanian mulligatawny from Muntean’s on J Street (don’t sleep on this place!). I was sure this would pass within a couple days.

Day Two
Day two welcomed me with a sweat outline of myself imprinted on my sheets. Every muscle in my body ached. Work was again unavoidable and this time in the far-off land of Modesto. Repeats of the no-handshake conversations transpired and soup was again on the menu (this time minestrone), which I had to pay for by check since my now flu-addled brain caused me to forget my wallet in the car. I made it home just before all semblance of stability left me. The ensuing fever was harsh and so, lacking any control of my internal thermostat, I was forced to set up a hot bed and a cold bed to make sleep possible. I slept 11 hours that night.

Day Three
Finally, a day to recover–or so I thought. My lack of preparedness was beginning to get the best of me. The only soup in my house was three packs of Top Ramen that said “best by 2007.” Too weak to leave home, I ate one of them anyway. It was all I could stomach for the day and it was pretty foul, so I guess Ramen can go bad after all. At some point I was lulled into a Game of Thrones marathon on HBO, which did not lend itself well to my already fragile mental state. In my half-conscious daydreams, I began to believe that it was up to me to save Ned Stark from those Lannister pricks. Needless to say, I failed miserably. Sorry, Ned.

Day Four
I woke to find myself naked, disoriented, sore and shivering in the cold bed believing my fever had finally broke, but as I would discover through a series of hot and cold flashes to come later in the day, it was all just a cruel jape. To add insult to injury, my sinuses were now plugged and my throat was on fire. Making matters worse, I also began to drool uncontrollably, requiring the assistance of a spit cup for my waking hours and a spit towel for my sleeping ones. Today’s soup was an awful pile of shit that Raley’s calls vegetable soup, but is actually closer to plant mulch with tomato juice.

Day Five
This fucking flu had the nerve to wake me up to a clear head and no fever only to transform me into a coughing, slobbering, wheezing, dripping mess 30 minutes later. My only savior was the icy hot patch on my lower back that allowed me to attain the fetal position that I needed oh so badly by that point. By 2 p.m., I had already sent out a preemptive, “Not coming in to work tomorrow,” email. This fucker still had legs and jumped up and down on my face for the rest of the day.

Day Six
When I woke up, the drooling, fever and body aches had gone, but the rest remained. The idea of eating another bowl of soup was about as appealing as eating my three-day-old spit towel, so instead, today’s soup was a roast beef sandwich. On Demand was malfunctioning and apparently 25 movie channels can only manage to play 10 different movies each day. Kinky Boots just doesn’t speak to me and one can only watch the Back to the Future trilogy so many times before you want to jolt your brain with 1.21 jiggawatts of electric chair goodness.

And yet I had to smile. The worst was apparently over. My swine bird turducken flu had tried its hardest to take me down, but I’m a goddamn marvel of modern science. Oh, and you best believe I’ll be getting the shot next year!