Only You Can Prevent America from Becoming an Asshole’s Paradise 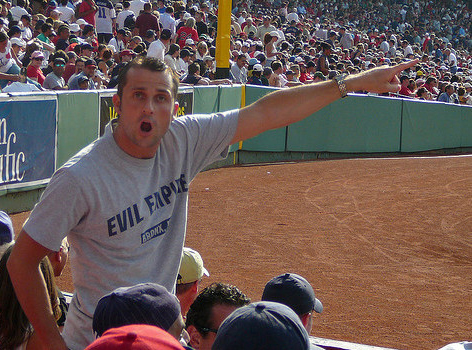 Few things are more American than baseball. When you enter a stadium and see the perfectly manicured greenery of the outfield, the crisp white base lines of the infield and the seats filled with fans holding $6 hot dogs and $8 Bud Lights, you can’t help but feel patriotic and proud. Such was the case this weekend when some friends and I went to see the Oakland A’s take on the New York Yankees.

As the game began, we noticed that there were three bros in the front of our section who were still standing. Being the gentleman that I am, I said, “Excuse me fellas, would you mind sitting down so we can see the game?” To which they replied, “No. Fuck you. What are you going to do about it?” Getting into a fistfight over $20 seats is some childish shit, and there was another open section right next to us, so we did the adult thing and moved.

Once again, we settled in to watch the game, but these assholes wouldn’t let it go. Apparently, our moving made them feel real tough, so they kept turning around and talking more shit. We were soon returning the favor and things started to escalate.

You could feel the tension in the air. The other people in our section were getting antsy, and the parents started to pull their children closer to them. A cotton candy vendor asked the assholes to sit down, but they blew him off too. The assholes even told a family with small children sitting behind them that they weren’t going to sit down for them either.

In the midst of talking shit, the fattest asshole (who we’ll call “Fat Asshole”) managed to spill his entire beer onto his gut. The crowd laughed and Fat Asshole was embarrassed, which only made him more determined to show us just how fat of an asshole he could really be. He wiped off his gut, walked over to us, sat down and proceeded to talk more shit.

Now like I said before, fighting over bleacher seats is childish, but we weren’t about to let some asshole walk all over us. My friend’s wife did her best to defuse the situation as the rest of my friends surrounded Fat Asshole. Fat Asshole’s friend, Slightly Thinner But Still Gaping Asshole, looked like he was trying to decide whether he should come up, while the third asshole, Stupid Asshole, just stood there wearing his Brewers jersey and looking lost.

Despite the noise of the stadium, it felt as if you could hear a pin drop. Right before things were about to explode, a woman’s voice yelled out from behind us, “Go back to your seat and sit down, asshole!” to which she got the same asshole answer everyone before her had heard: “These are general admission seats, we can sit where we want and we aren’t moving.”

She walked off with her cell phone in hand and a couple of cops were there moments later. Slightly Thinner But Still Gaping Asshole saw them first and signaled to Fat Asshole that it was time to find different seats and maybe actually sit in them this time. They grabbed Stupid Asshole and skulked out to the applause of everyone else in our section. The cops missed them by seconds, but we didn’t care; those assholes were gone and we could finally watch the game.

The events of that day reminded me that there is something more American than baseball. Unfortunately, that thing is being an asshole. The assholes in my story were born of their desire to inexplicably block the view of an entire section behind them, but there are so many other types. Wall Street “Wizards,” crooked politicians, your boss, your mortgage lender, that d-bag who cut you off on the freeway last week… This country has assholes-a-plenty and they seem to be spreading fast.

These gaping assholes are threatening to swallow us all if we don’t act soon. Look how much airtime they already give to Donald Trump! The rise of the asshole is real. Assholes want to ruin your life for their own amusement. We have to fight back before these assholes make the world shittier than ever before! Now who’s with me?!?