Opting In On Opting Out 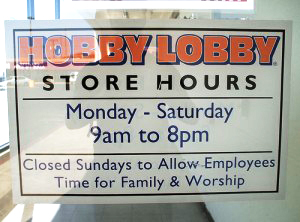 We’ve really made some huge strides these last four years. Thanks to a few wonderful U.S. Supreme Court decisions, the floodgates have really started jumping open for some of the disadvantaged, and the ensuing tidal wave will be hard to stop. For once, people (and by people, I mean corporations) don’t have to hide in the closet anymore.

If you’ll recall, in its infinite wisdom, the Supreme Court had already given corporations the right to free speech through unlimited political campaign donations in the 2010 Citizens United decision. In that decision, we were reminded that corporations are people too—only richer, more powerful and less culpable than you or I.

The public outcry that followed must have made the Christian conservative members of the Supreme Court realize that, like all bad people, these poor corporations were in need of some saving. Fortunately, Justice Alito knew how to fix what ailed them, and with the stroke of a pen, gave some of that old time religion to for-profit, closely held corporations. Under the recent Supreme Court ruling in Burwell v. Hobby Lobby, a closely held corporation (i.e. any corporation where half of the stock is owned by five people or less) may opt out of the Obamacare requirement that employer-provided health insurance cover contraception if the corporation has a religious objection to the use of contraception.

This is wonderful news for you; well, not for you as a person, but for you as a Person, Inc. Corporations already enjoy tax advantages over regular ol’ people. As the housing collapse and countless automobile safety recalls have taught us, corporations are basically immune from criminal liability. Corporations can also walk away from unpaid debts simply by selling off their assets and winding down. As we learned in Citizens United, corporations can also lobby for favorable changes to the law and then contribute unlimited donations to the campaigns of the congressmen voting on those changes.

While all of that was already pretty great, now these “people” can also have a religion that allows them to opt out of laws they don’t agree with. As an example of the reach of this ruling, after it was published, one pastor requested an exemption from President Obama’s planned executive order that bars federal contractors from discriminating based on sexual orientation. The anti-vaccine crowd will surely be all over this soon, claiming that their religion, Jenny McCarthyism, forbids them from vaccinating their children. After that, it won’t be long before owners of private Christian schools claim that they should not be required to teach science because of Jesus.

But why should they have all the fun of opting out? Anyone can be a closely held corporation. All you need to do is register with the Secretary of State of your choice, fill out some paperwork, pay a fee, issue stock to yourself and voilá: you are now a closely held corporation with all the rights and privileges assigned thereto! If you really want to go for the full effect, make yourself up some bullshit idea for an app and get some venture capital seed money to pay off congressmen with.

Once your corporation is set up, you will need to pick a religion to really take advantage of what your new form of personhood has to offer. Not happy with the options out there? Well why not just make up a new religion?

You could be a member of the Holy Church of the Almighty Dollar. Pastor Grover Norquist and Reverend Wesley Snipes can preach to the new corporate about the evils of taxation until you come to the light and realize that the God of Money considers taxes a sin, allowing you to file for an exemption with the IRS. Your corporation could then decide to pay its employees less than minimum wage or nothing at all because Dollarism preaches that one should try to keep money, not give it away. Did you know that Dollarism also teaches that we must defend our money from any potential moochers at all costs including through the use of deadly force if necessary? That means my corporation can raise an army to protect its money (even against the government) and require its employees to serve as combatants.

See how easy and fun it is? Nearly anyone can do this, so just imagine the possibilities. We could turn this country into the lawless hellscape of your dreams in no time flat! Surely, this is what the Supreme Court intended to happen, otherwise they would just look like a bunch of sick dicks that Americans need to be protected from. Clearly, with their decision in the Hobby Lobby case, the Supreme Court doesn’t think we need protection from that at all.