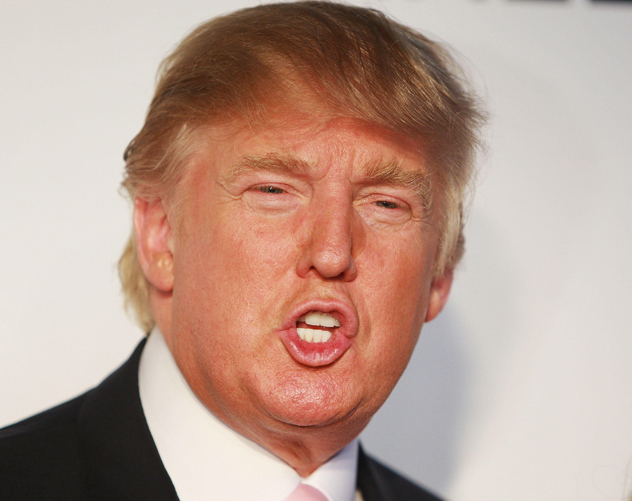 America is collapsing in on itself and only a floppy-haired, shit-spewing, orange-faced, dim-witted asshole can save us … or so Donald Trump would have you believe. It’s for real this time: Donald Trump is running for president as a Republican. Trump’s current quest for the highest office in the land started off with a bang last month when he summarily dismissed all Mexican immigrants as rapists and killers; though, to be fair, he did admit that some of them are probably good people.

A media shitstorm ensued and Donald lost his television show, The Apprentice, his clothing deal with Macy’s, the PGA golf tour and his broadcasting deal with NBC and Univision for the Miss USA pageant. Despite the fallout from the statement, Trump stuck to his remarks, mostly because he is incapable of admitting when he does something wrong or stupid, which happens often.

With all of his failures as a human being, you would think that Trump would be taking a beating in the polls. Normally that would be the case, but we are talking about the Republican primaries here, so of course Donald Trump is in the lead. Rest assured, this “lead” means he is polling at around 17 percent amongst 15 candidates. As we saw before with Tim Pawlenty and Herman Cain, this will be one ride to the top that will surely end in a spectacular crash and burn. It’s only a matter of time.

But what if sanity loses out? What if Donald Trump is actually elected to be the next Commander in Chief? We’ve already gotten some insight into The Donald’s foreign policy prowess with his comments on Mexico. Apparently, Mexicans are killers and rapists that have to be stopped. Trump has said he will build that border wall that some people think we need, and he will make Mexico pay for it. Given how his conversation with Mexico has begun, I imagine those negotiations will go smoothly.

When it comes to keeping us safe, Trump has said before that he has plans to wipe out ISIS, Al Qaeda, the Taliban, North Korea and Iran in one swoop. Either that means nukes or he plans to use the sheer force of his ugly, pasty mug to send terror through the streets of the Middle East until they simply give up on Islam and adopt an American-style democracy.

Trump will deal with the rest of the world based on whether they’re losers, jerks or OK guys. The losers are the people that Donald doesn’t like because they call him out on his bullshit or because he thinks he can beat them in business, which includes places like Mexico, Greece, France, China and most of the others. The jerks are the countries on his aforementioned hit list and also his ex-wife Ivana. The OK guys are the countries that are not as good as the United States and are under its control, which basically means the United Kingdom, Canada and Australia.

This is where Trump thinks he has things on lock. He thinks the United States will do better economically with him as president because Trump is good at business. He believes he can out-negotiate all of the OK guys and jerks into giving us everything we want while they are left with the bill. Back at home, he will probably tell the country that we need to loosen the regulations on construction, real estate dealings and gambling because that is how he got rich. It’s basic math, people!

As he’s grown rich, Trump has also built up his brand by sticking his name on everything he is involved with. This will not stop once he is president, so don’t be surprised if he redesigns that loser American flag. Maybe the new flag will be black with “Trumperica” written on it in big gold letters. The White House will of course become the Trump House and will be gilded with the money Trump saves by gutting welfare because that’s for losers.

Trump also has a couple of ideas about the environment. First, he is not giving up anything he likes whether it hurts the Earth or not, so don’t think about pulling that global warming nonsense with him. Besides, a wind farm would ruin the view at Mar-a-Lago. If nature is your thing then you might be in luck, as Trump might even try sticking golf courses in our national parks to make them more classy.

These are but a few of the possible outcomes if Trump is elected president in 2016. Donald has been kicking the tires on this POS for years and he has finally decided that now is the time to take the plunge, so this shit is for real. He’s got big plans to class up this dump. All you jerks and losers better take notice or you might get fired!