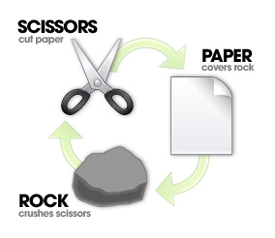 Politics are just a big game, nothing more. Until recently, it was mostly a two-player game, with both sides locked in a stalemate for the past 20 years or so. Dug into their respective trenches, the Democrats and Republicans took pot shots at one another, with neither side really ever gaining much ground. It’s been quite a cluster-fuck, but that was apparently only the beginning.

In the past year, the Tea Party has taken it up a notch to dumb the game down. The result is pure ridiculousness. There used to be some honor in the game, respect even (just a little), but no more. No longer akin to a chess match, politics have regressed into something much more childlike. Thumb wrestling would almost describe it, but it’s much more lazy. Besides, today’s politicians seem to prefer games of chance where they can gamble our futures away.

Perhaps a better game would be Ro-Sham-Bo. Of course, a three-way Ro-Sham-Bo means each side’s actions cancel out another’s, causing a null game. Politicians would like this since, essentially, no one wins or loses. Fun, huh? So, I guess the only question left is which party will pick rock, who wants paper, and who chooses scissors? Based on their actions to date, I think I have pretty good idea of how it will all go down.

The Tea Party is so bloodthirsty. They won’t be happy until everyone’s assholes are resting comfortably on the end of a bayonet. Unfortunately, bayonets are not an option in Ro-Sham-Bo; so, the Tea Party will have to go for the next best thing: scissors. While a seemingly obvious choice, it won’t be easy for the Tea Baggers to settle on scissors. There is going to be a lot of discussion about how the hand gesture for scissors looks a lot like a peace sign. To quell their fear of hippies, they’ll agree to attach blades to their scissor fingers.

Showing a clear disregard for the safety of others, they’ll run with their scissor-fingers and scream that the end is near. The Tea Baggers will cut out the already bleeding hearts of all liberal/commie/socialist/elitist devils across America. When not literally disheartening their enemies, the Tea Party will use their scissors to cut up the Constitution in order to protect its true meaning (at least as it’s defined by the Tea Party, or amended by Jesus).

Believe it or not, we will have to rely on the Republicans to save us from the scissor-fingered, brainless, Tea Party menace. The Republicans see themselves as immovable, resolute and solid, like a rock. They are also stubborn, burdensome, jagged, obtrusive and annoying, just like rocks. They stand in the way of progress and break the backs of those forced to haul them away. Rocks can also be used to build walls, and we all know Republicans love them some walls. From gated communities to border fences, America is going to be so “safe.” And if things get unsafe, Republicans will use their rocks to stone their enemies. It’s about to get biblical, bitches!

The Democrats will take about nine months to actually make their move, so they will be stuck with the only remaining option, paper. Despite the lack of choice, Democrats will debate the matter to exhaustion. In the end, the aerodynamically efficient hand gesture for paper will win them over to accepting the only choice they had in the first place.

They will write things on paper and read it out loud in the House and Senate chambers, and everyone will have to listen. They will write wonderful new laws, only to feed them to their fellow “paper” people, who will tack on so much crap that the paper they started out with ends up looking like an origami asshole. They will never stop patting themselves on the backs for covering those stone-headed Republicans with their lovely paper.

With all their enemies vanquished, the Democrats will prepare to “better” the world. They will use tons of paper, writing long-winded, inarticulate and often redundant laws that never seem to work out as originally intended. Eventually things will get so bad that Democrats will use pieces of card stock to slit their wrists, leaving the country in the hands of the Libertarians, Green Party and the American Freedom Party. I can’t even fathom what kind of game those three might play.