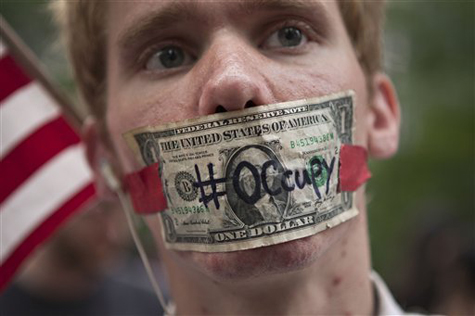 There’s a war going on outside that no man is safe from. The rich have destroyed the economy, eliminated jobs and hoarded cash. Now the jobless masses created by the rich have begun demonstrating on Wall Street and in other cities across America. America has officially proclaimed it class warfare, and we are deep in the shit.

The rich have done everything they can so far to cut off any source of funds for the poor to use in their struggles. They’ve laid us off, sent our jobs overseas, prevented their banks from lending us money, gouged us with fees and foreclosed on our homes. In retaliation, the poor have asked the president to raise taxes on people making more than $1 million per year and to enact some laws that will prevent another economic collapse. Clearly the poor have overstepped their bounds and have welcomed the wrath of the right.

Members of the Tea Party have come out against this class warfare because it’s Socialism, damn it! If only there was a lesson from history where a country was born out of a struggle between classes over freedom for every person, whether they be white, Anglo-Saxon, Protestant or male. You know, something that maybe 234 years later, a group of real patriots could get together and name themselves after.

The Boston TEA PARTY of 1773 was essentially class warfare. The revolution that led to the founding of this country in 1776 began as a protest against excessive taxes, taxes that the colonists felt were being used to prop up the monarchy (the “wealthy”) while the lowly commoners (the “poor”) toiled away for the king. The colonists recognized they weren’t receiving their fair share and did something about it. So they got a bunch of guns, formed an army and killed lots of British people.

Less than 100 years later we had another class war. By 1860, many Americans had forgotten how shitty it was to be controlled by others. The wealthy landowners had imported nearly one-third of the total U.S. population to work as slaves. The country was torn over whether the practice should be allowed to continue. The Civil War was a war about class. Sure, it was about freeing slaves, but it was also a check on the upper classes’ blatant exploitation of the poor. A million deaths later and the country was still here.

The wealthy couldn’t literally own people anymore, but they could do almost all the same shit if they shelled out a nowhere near livable wage to each employee. When they weren’t paying their employees chump change, the wealthy factory owners were doing everything in their power to squeeze another penny out of the available workforce. Adults too expensive? Try using children! Why have eight-hour shifts, when you can literally work people to death 24 hours a day in dangerously toxic environments? Everyone claims to hate unions now, but without them, the poor would still be working under these conditions today.

This latest round of conflict has us once again asking why the haves have so much while the have-nots have so little. The Tea Party actually began with this question, but seems to have quickly lost sight of the prize. While the Tea Baggers focus on whether we should get rid of our government, our Mexicans and/or our gays, the supporters of #OccupyWallStreet have gathered in several cities to ask that the concerns of 99 percent of the country be addressed.

The media is mad because the protestors won’t give them a simple short list of grievances. Apparently they can no longer cover the news without talking points. It’s absurd to suggest that the protestors can only be upset about one thing. What the protestors are trying to say is that this country is going to shit on many levels, some related, some not.

It isn’t just about predatory lending or ridiculous bank fees. It’s also about corruption both in the government and the private sector. It’s about the poor bearing the brunt of the financial downturn while the rich make more money than ever before. This isn’t about socialism or class warfare, it’s about fairness. We want a level playing field where we might all be given a chance to succeed. We the people of the 99 percent want our voices heard again and as history has shown, we will not be silenced!