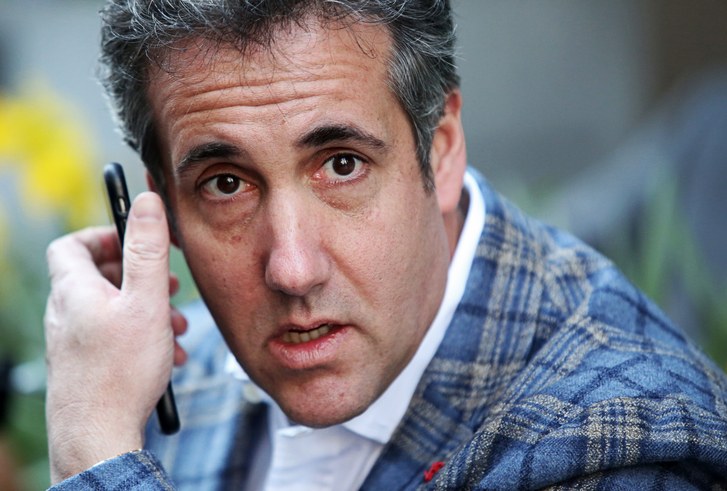 Being the personal attorney for the President of the United States certainly has its perks, but getting raided by the FBI is probably not one of them. Unfortunately for Michael Cohen, this is now his life. Cohen is reportedly under criminal investigation over his personal business dealings, whatever that means. The feds searched his home, hotel room, office, safe deposit box, cell phones and computers recently, and seized several items to be used as evidence against him in court.

Through court proceedings over the admissibility of this evidence, we’ve learned that Michael Cohen only has three clients: the President, a top Republican fundraiser named Elliott Broidy and Fox News’ own Sean Hannity. Cohen’s legal work for his first two clients has been as a fixer, silencing people with knowledge of their sexual indiscretions with hush money, non-disclosure agreements and threats of costly litigation. We’ve been left to guess why Hannity hired him, but thanks to my mastery of the internets and its tubes that lead to the court, I’ve obtained some of Cohen’s email exchanges with his clients and am here to share them with you. Enjoy!

I always knew I would WIN the presidency, Michael, and I definitely did it BIG LEAGUE all by MYSELF!!! Wait until you see the crowds at my inauguration. THEY WILL BE RECORD BREAKING!!! Gonna blow that punk OBUMMER right out of the water! Anyway, just want to make sure you shredded all that Russia stuff like Putin told us to do. He seems like a smart guy, maybe not as smart as me, but smart. My gut says go with Putin on this one. So, let’s make sure all that stuff gets shredded and the money is stashed in the Caymans. Also, my son Don Jr. may be in need of your services soon. He is certainly a chip off the old block!

–THE PRESIDENT OF THE UNITED STATES (Can you believe it?!?)

First off, let me say congratulations and that I always believed in you, Mr. Trump. Let me assure you that we’ve done a great job of handling this whole Russia thing. Not a word is going to get out. It’s a non-issue just like Stormy Daniels and Karen McDougal. It’s all been taken care of and I’ll keep an eye on Don Jr. too! I’m always at your service, Mr. President!

Good afternoon, Mr. Cohen. I got your email address from the President. I am a top campaign fundraiser for the Republican National Committee and I’m afraid I’ve landed myself in a bit of trouble. You see, there was this party at the Playboy Mansion after the inauguration and my fellow Republicans and I were reveling in our wins this last cycle. I think we may have got a bit out of hand and I fornicated with a playmate. Now this woman is calling me about being pregnant with my child. I’m a married man and I can’t have this information out. Can you help shut this hussy up?

It is a pleasure to make your acquaintance Mr. Broidy. I think I understand your situation and a friend of the President’s is a friend of mine. I don’t think you have too much to worry about. Who wouldn’t cheat on their wife with a playmate? Mr. Trump has been gracious enough to get me invited to the mansion as well and I certainly had a great time.
You don’t need to worry. I’ve dealt with their kind before. There is always a price that will keep someone quiet. I’ll just need to know how much you are willing to part with. I can also offer my services on retainer if you plan on going back to the mansion and want an extra layer of protection. No reason for you to stop having a good time, am I right?

Hey Mike! I have a real estate question for you. Let’s say I slept with my real estate agent, but it happened in another country. Would that be considered cheating on my wife? Thanks bud!

Sean, I’m not sure that’s a real estate question, but I think you are OK. What happens in Vegas stays in Vegas, am I right?

Funny you should mention that because the same thing happened when I was in Vegas last week. Also, can you help me take my wife’s name off the title to our house? She’s being a real pain in my ass lately and I want to remind her that I am the only King of this castle.

Strong move! Wives are the worst! Consider it done, Sean.