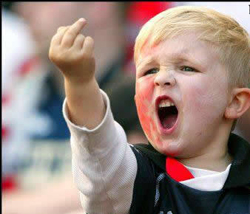 I’ve been commuting semi-regularly for the past few weeks. All that freeway time hasn’t exactly made me appreciative of my fellow man. I might have gone on a rampage if I had remembered to bring my gat; but alas, Bam-Bam was resting snuggly under my pillow at home. Stuck in gridlock with little to do but sit and steam, I couldn’t help but reflect on the other things that annoy me. In the interest of avoiding another round of Zoloft, I figure it’s best to channel the funk to you via the pages of one of the few things I don’t hate, Submerge .annoying

Let’s begin with the bad boy that unleashed the hater in me: freeway traffic. I’ll actually be a little more specific and say evening freeway traffic between Modesto and Sacramento on Highway 99. What the fuck are you people doing out there? It is very simple: The fast lane is the one on the left and the slow lane is the one on the right. I know that the fast lane looks real tempting: after all, there is a whole line of cars over there. The slow lane is all open and boring. Why not join the party and cram yourself in? You might as well throw that brake on; get this thing slowed down to 55 mph. Here, let me just slap you upside the head real quick. LISTEN: If you don’t plan on going fast (i.e. faster than the speed limit, or at least at the speed limit) move to the right.

Speaking of the right, this next hate goes out to Fox News Glenn Beck. I know he’s an easy target and that he’s getting clowned on The Daily Show regularly, but I got to throw in my two cents. The other night I actually tried to watch Glenn Beck”¦ Wow! Dude is seriously on one. The captured news reporters were finally released from North Korea (word Billy!), so, of course the topic of discussion was how Obama really fucked this one up. It was so bad that my television literally froze for a minute or so.

If you consider yourself a Glenn Beck fan, then this next hate might just be for you. I’m talking to the dumb people. I’m talking to the dumb people. I repeated that last sentence on purpose, just to get their attention. Idiots love having you explain things in 12 different ways before opting for the Pictionary version. Eventually they just nod their heads in agreement while staring at you with glazed eyes and open mouths. If you are really that dumb (and you know if you are), then you need to find an interpreter to help you. Oh sorry”¦ I mean, you need an explainer that will learn you the words I’m saying. Try to stay with me, it’s about to get more complicated.

Big downs to all my smart-dumb cats! Yeah, you think you’re hot shit, don’t you? Well I’m about to take a dump in your house in the middle of summer. You got a college degree, so naturally, you know everything about everything. Too bad you are as big a pain in the ass to explain something to as the idiot that got lost at the beginning of the last paragraph. The only difference is that you want to draw the pictures for me, for some reason. You have a million bullshit hypotheticals to pitch and apparently, a seemingly endless supply of time to have them answered. What if I beat you with my keyboard, sir? Would that satisfy your curiosity?

So much hate and so little space: the following hate-outs come in no particular order. What up to all you slow ass motherfuckers in the drive-thru lines! Stop ordering the entire menu and don’t pay in change that you haven’t counted yet! Hey Bluetooth man in the elevator: stop shouting that you are losing the signal. They can’t hear you, but we sure as hell can (and could before too, loud-ass). Sacramento traffic lights, can we get a timing correction? I’m sitting at empty intersections for way too long and missing green lights when I’m two cars back. Get on your game, bitches! Finally, a big “fuck you” to all the haters out there. Y’all are a bunch of real dicks!