Speaking for The Donald? 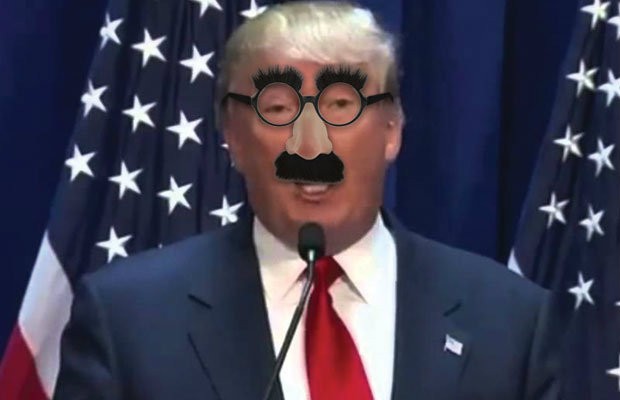 The media has been in a tizzy over revelations that presidential candidate and world class blowhard Donald Trump pretended to be his own spokesman during phone interviews with them in the ‘80s and ‘90s. Members of the press have accused him of using names like John Miller, John Barron and Donald Baron in conversations with them in an attempt to bolster his rep and stroke his own ego.

The Washington Post even released audio from an interview between a People magazine reporter and a Trump spokesman named John Miller as proof of the scheme. While I’ll admit that the voice on the tape sounds eerily similar to the Donald in both speech patterns and voice, there may still be one big problem with this theory: I actually met a man claiming to be John Miller, spokesman for Donald J. Trump!

John Miller is a tall man. His pale skin is weathered and wrinkled, and his spotty, bald head is ringed with a faint whisper of blondish-red hair. He wears large-framed, lightly shaded glasses that partially cover his always-judging blue eyes. The lower half of his face is dominated by a thick red mustache that almost distracts you from his protruding belly. His fingers are short and stubby, but well-manicured and unburdened by jewelry.

Flashy in appearance he is not. The suit he wore to the interview was nice, but not too nice and otherwise unremarkable; almost like he was trying hard not to stand out. Yet, despite his attempts to blend in, Miller undeniably shares some things with his boss; John speaks matter-of-factly (even when he doesn’t seem to know what he is talking about) and, of course, he has nothing but praise for Donald Trump.

John Miller told me he grew up in Atlantic City, New Jersey in the 1940s. His father, Baeron (pronounced Baron) was a master carpenter and worked on many of the casinos in the area. John’s mother, Anne Marie was an Irish immigrant and had met John’s father on a trip to America when she was a teenager. They married soon after and John was born nine months later.

John described his father almost as if he were a god. “[My father] could have whatever he wanted. If he wanted something, he took it and nobody said nothing! He was a tremendous … man.” On his mother, Miller didn’t seem as enthusiastic, but did say that she kept the house clean and he and his father well fed, “so I guess she was alright, for an immigrant.”

Miller said he grew up in a blue collar community and went to public school. I asked him which schools he attended and when, and after much thought he answered that they had all been torn down and he couldn’t remember. He did, however, vividly recall his own feats of athleticism during the time and that all of the ladies wanted him because he was a great lover. “Second only to the man, Donald J. Trump, himself!” he told me with a grin that stretched across his burdensome mustache.

When asked how and when he came to know Trump, Miller explained that his father had met Trump during the construction of the Taj Mahal Casino in Atlantic City. “Trump was impressed with my father’s craftsmanship and asked him to come out to Mar-A-Lago to celebrate after construction of the casino completed. My father was allowed one guest and he chose me over my mother because I had an incredible career as a spokesman. He thought Trump might be more stunned by my amazing skills with the words that I speak than by my Irish mom. I think he made the right choice.”

Miller claimed that Trump was so impressed with his resume and his gift for gab that he hired him on the spot. “Trump said I reminded him of himself. I told him that was the greatest most incredible compliment I have and will ever receive. We have been close friends ever since.”

“That’s why I think it’s great that Trump is running for President!” Miller gushed. “[Trump] is a great man … some say the greatest. The guy kills it on all the business deals. He is also smart, probably a genius, and knows more about things than anyone else. Just look at what he’s been saying about Mexico; they are killing us! Them and China! And Trump is the only one calling them on their crap. The guy is amazing!”

“That’s why Donald Trump has all the money and things that anyone could want and has slept with the hottest, most luxurious broads on the planet.” Miller continued, “Even his daughter, Ivanka, is a 10. She is truly one of the great beauties of the world. I mean, I wouldn’t even get mad if Trump slept with her. The guy makes incest feel almost presidential!”

After wiping the vomit from my shoes, I mentioned to Miller that his story mirrors Trump’s in many ways and asked him if he’d like to comment. His only reply was that he didn’t see the similarities and that he was tired of attacks from the liberal media. I apologized and told him that it didn’t help that he looked a lot like Trump, but without the crazy hair and orange skin. He got so mad that his mustache appeared to come loose. He ended the interview and walked out. He has since stopped returning my calls.

So who, exactly, is John Miller? Submerge’s team of investigative journalists were unable to answer that question despite their exhaustive research. Much of Miller’s story seems reasonably believable, but things fall apart in the details. For example, Trump didn’t build the Taj Mahal and we were unable to find anyone other than Trump who had worked with or even knew Miller. I find it hard to believe that anyone could love Donald Trump as much as John Miller, but the truth is, we may never know. It’s probably just Donald Trump pretending to be someone else though.