Terror in the Skies! 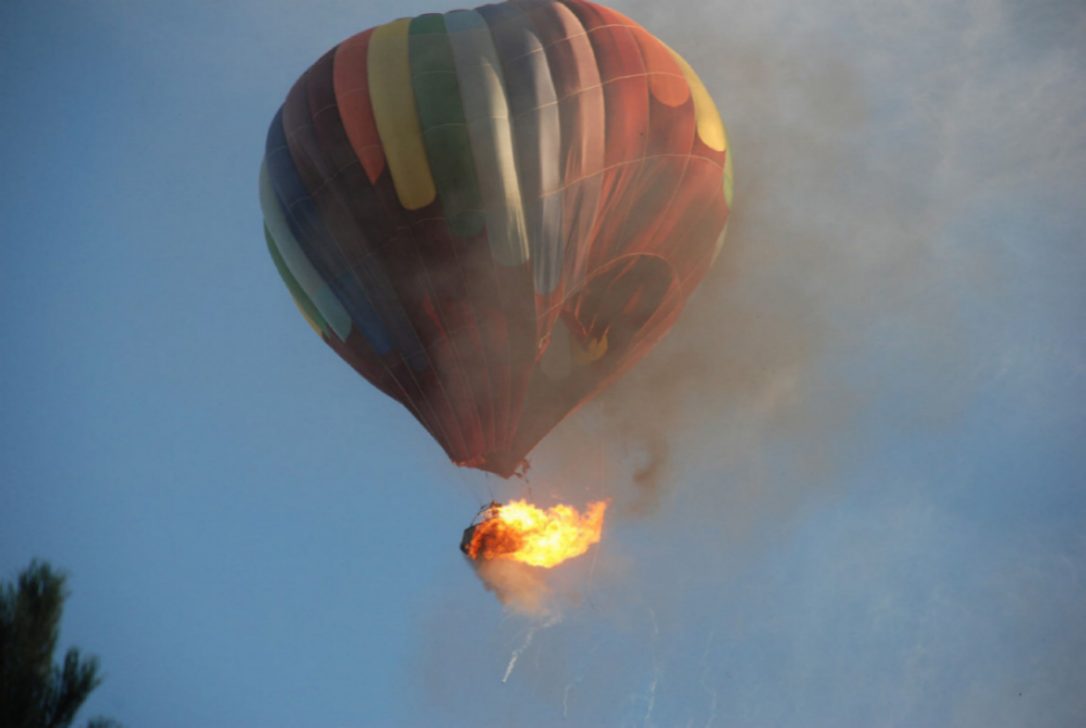 Attention readers of Submerge: you might be in danger at this very moment! If you are reading this while riding in a hot air balloon, you may be about to die! Tell the balloon dragon pilot to bring her down and let you out immediately before you suffer a needless death. No matter what the pilot says, you are not safe, he does not have things under control and you need to get the fuck out of there right now!

OK, are you safely back on terra firma? Good! Now kiss the ground and count your lucky stars that you aren’t just a pile of bleeding, mangled body parts in an oversized basket at the bottom of a canyon. That wonderful flying contraption you just rode to that ultimate view was a goddamn death trap and you could have been killed!

Don’t believe me? Just look at what hot air balloons are made of: a blowtorch, a basket and a balloon. If I gave you a car made from wicker and nylon that was propelled by a propane tank attached to an open flame blowing around in there, would you consider it safe to drive? Of course you wouldn’t, so why in the hell would you fly in the same thing?

I mean, baskets do an OK job of carrying food in picnic-type situations, but I’m pretty sure they weren’t designed to protect people from falling out of the sky. Baskets just aren’t that durable. I’ve seen a fat cat squash a basket before like it was nothing, so why would I want to ride 2000 feet in the air in one while underneath a balloon filled with combustible gas?

As if the basket weren’t enough reason to avoid hot air balloons, the whole thing is being propelled by a tank of propane, so you are basically flying around in a barbecue! Have you ever had a propane tank refilled? If so, then you’ve probably noticed the warning sign by the pump that says, “Do not operate near open flame! Highly combustible gas!” That all makes perfect sense because propane is fuel and tends to explode when it’s lit on fire.

Why anyone would want to take a ride in a floating barbecue is beyond me. I can’t be the only one that thinks it’s crazy to fire off a propane torch while standing underneath it in a giant basket that hangs from a balloon a half-mile above the ground. There are certainly better ways to die than that. Why not skate around the top of a skyscraper in banana peel shoes or point a gun at a Texan and tell him Jesus didn’t ride a dinosaur? Either will get you killed in a much more memorable fashion than, “He died in a hot air balloon crash.”

If it’s not the balloon itself that kills you, perhaps Mother Nature will. This is not an airplane with a hardened cockpit that we’re talking about here. You are completely exposed to the elements up there in a hot air balloon. There are the obvious dangers, like gusts of wind, rain and lightning to worry about, of course, but there are also the three B’s: barbs, birds and bears.

Barbs are things that could ensnare balloons. They include electrical towers and wires, large trees, pointy buildings and barb wire fences. Barbs tear balloons and cause them to deflate (i.e., you crash and die). Barbs and balloons simply don’t mix!

Birds will poke through your hot air balloon with their freakish beaks. Sometimes it’s an accident and sometimes it’s sweet revenge for the deaths of their flocks. A hot air balloon can look terribly comfortable to a weary duck returning home for the summer. A nice, big cushion of warm air is a welcome sight and can put them right to sleep. Next thing you know, they roll over and accidentally rip a big ol’ hole in your balloon with their bills. Geese and blue jays are just dicks; they will jack up a hot air balloon something awful just for floating in the way.

Now you know why hot air balloons aren’t safe and you can all tell my girlfriend that it’s not a good idea to ride in one. As we can all see, there are a multitude of reasons why we should never engage in any hot air ballooning activities that take place off the ground. My reasons for not wanting to go in one are firmly based on these facts and definitely have nothing to do with my debilitating fear of heights. That would just be silly, and this is clearly no laughing matter.