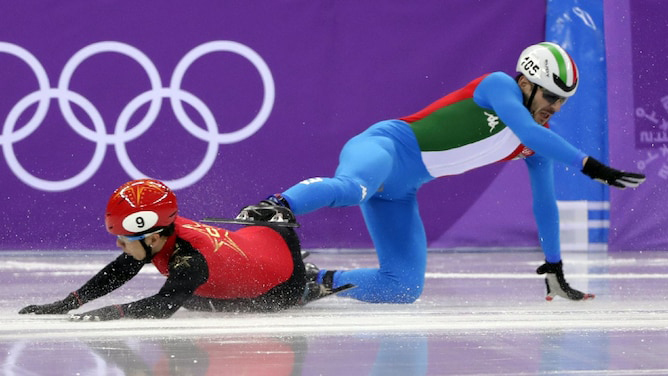 Every four years, it gets cold enough somewhere in the world to host a massive sporting event in the snow and on the ice. They call it the Winter Olympics, and this year it’s being held in Pyeongchang, South Korea. The Winter Olympics are like the Summer Olympics, except colder and not as much fun to watch. It’s a real snow job and it’s going to take over the airwaves of NBC and all its affiliates for the next two weeks whether you like it or not, so ya better get used to it!

It’s not all bad though. The Olympics can be a time for the world to come together to settle their disputes, or at least improve relations. It looks like that may be happening with the North and South Koreans this year, which is certainly a welcome event. Unfortunately, if you were hoping our country’s neverending beef with the Russians would be settled via sporting competition, then you better go rent Rocky IV or Miracle.

Russia is still facing a doping ban and was not invited to the games in Pyeongchang. However, some Russians will be allowed to compete under an Olympic flag if they are cleared by the Olympic Committee first. It is also possible that Russia will spring a sneak attack on South Korea to annex the games and install themselves as the new heads of the Olympic Committee. Then we’ll see who has the dirty pee, comrade!

While some of the magic may be gone from this year’s games, they certainly won’t be boring. Even if Russia keeps its hands to itself, many of the stadium complexes built to house the games are dangerously close to the North Korean border. While the North Koreans may be saying they want to make nice with the South now, Kim Jong Un could very well change his mind tomorrow and launch an attack. He is easily rattled, especially by President Trump, who got into a pissing match with Kim over the size of their nuclear launch buttons.

That argument inspired the Olympic Committee to introduce a new event to this year’s games, which they’re calling nuclear football. In nuclear football, the leaders of every nuclear-armed nation face off in a race to see who can lose their cool and push their nuclear launch buttons the fastest. Odds-on favorite this year is North Korea’s Kim Jong Un, the newest member of the nuclear club. Kim has that right balance of inexperience and crazy that puts him steps ahead of his opponents. Trump with his dumb, child-like brain would seem like a shoe-in, but his small fingers put him at a real disadvantage in this event.

If the possibility for total annihilation is not enough to pique your interest in the Pyeongchang Olympics, perhaps one of the four other events being added this year will. The Olympics Committee wants all you kids to know that the Olympics are going to be totally rad this year, dude! They added big-air snowboarding because both it and they are cool, so please follow, like and retweet them on Instagram, Facebook and Twitter, k!

Mass start speed skating is the next new event and it’s an odd one. Skaters are placed in an ice rink built inside a Catholic church and are only allowed to race once the daily mass begins. The race ends at the apocalypse, so the results may be tied to those of nuclear football.

If Jesus and speed aren’t your thing, then maybe the next new event, mixed doubles curling, will be. In this new event, athletes are required to bicep curl their opposite-sex teammate in one hand while sweeping dirty ice with a broom held in the other. At the same time, the opposing team slides large, round, concrete blocks at them to try to throw them off balance and break eggs around the rink. Points are awarded for time standing, number of curls completed, surface area swept and eggs intact.

The final new event in this year’s Olympic games is team alpine skiing. In team alpine skiing, each country competing in this year’s games must send their entire team down the slopes of the tallest mountain in South Korea at the same time on skis. The country with the fastest average time and the least number of athletes injured wins. It’s a brutal sport for the larger countries competing in the games, but it is the price of entry and a way to prune the dead weight from the old Olympic tree. It also serves as a sacrifice to the Greek gods who still retain their roles as overseers of the games every four years.

It’s really all for them anyway. Why else do you think we would be playing these crazy sports? Surely it must be for the gods’ amusement. I can practically hear Zeus laughing his ass off from his cloudy throne on Mount Olympus. Still, the gods must be appeased, and if watching a few wacky snow sports on TV for a couple of weeks out of the year takes care of that obligation, then I guess I can manage that. I hope you can, too!