The 300 Coolest Things About Sacramento (A Poem) 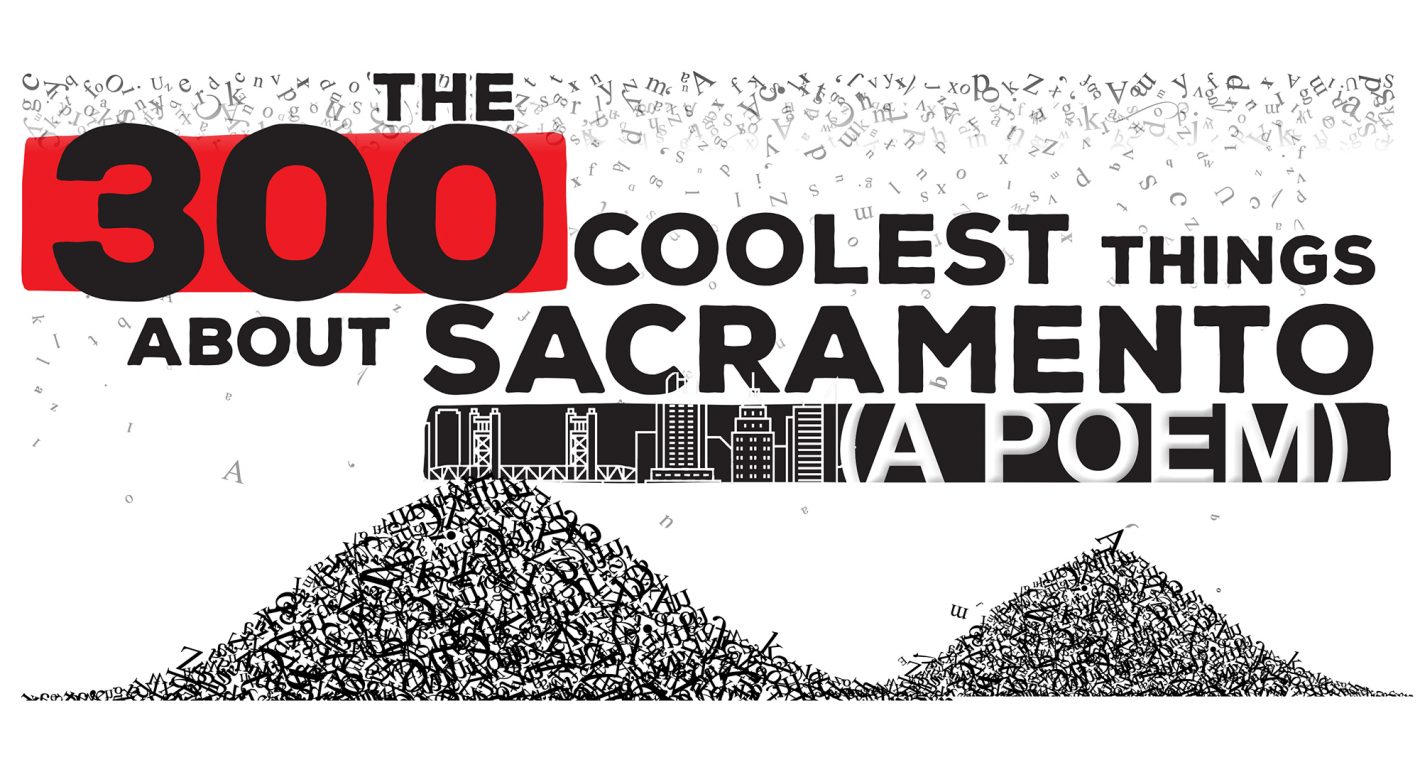 Looking at the squirrels in my backyard while the cool Delta breeze kisses my face
The purple explosion sunsets look better than anything I’ve ever seen
Always lights, from the Halloween decorations in The Fabulous Forties
To the Christmas twinkles swallowing up
T Street
The magic of nature and the city together is everywhere
Sac State Arboretum is a plant museum of delights
The McKinley Park Rose Garden endures the wedding photos
While every tree in this city of trees stand watch over the cool people within
East Sac Nextdoor is scared of the coyotes
Just leave Jimboys on your lawn so they won’t eat your cats

The music and noise massages my brain fromAce of Spades to Harlow’s to Pops and Concerts in the Park
From Silver Orange to Blue Lamp to
Drop Dead Red to Autumn Skies
The sounds of joy bounce from
The Red Museum to Lavender Heights
Press Club, Ironsides, Café Colonial
Go to Poetry Unplugged and hear the testimonial
Gabriell Garcia and Lee Osh keep the punk alive
While Peter Petty jumps the jive
April Walker is a funky space talker and my oh my it’s Andru Defeye
Come back for Seconds, Allyson and Kevin
Jesus and the Dinosaurs sound like Heaven
Hobo Johnson, Anton Barbeau, Tycho, CAKE and Mozzy, you know
Death Grips and DJ Lady Grey rock, Warp 11 can suck my Spock
Andy Laughlin, Rituals of Mine, let’s see LaTour playing at Shine
Hans Eberbach and Jerry Perry, The Philharmonik and DJ Larry are rockin it
Drunk Poetry, Luna’s and AndYes are rhyming it
Ross Hammond, Hoods, Michael Ray and Sparks Across Darkness
Dog Party’s bite is worse than their barkness
Comedy Spot, Laughs, Punch and Stab!
The jokesters at A Toucha Class ain’t
too shab
Stephen Ferris, Dru Burks,
Ngaio Bealum
So many good jokes nobody can
steal ‘em
Shahera Hyatt, DJ Sandhu,
Regina Givens, Lance Woods
Make you laugh like you knew
they could
Parker Newman, Kiry Shabazz,
Becky Lynn, Melissa McGillicuddy
Throw off my meter badly and make it hard to rhyme
Setnik, Jensen, Taylor, Cella, Mangham, Lewis, Luna, Portela
Stigerts, Mena, Harshaw, Haney
If you’re looking for comedians,
you can’t complainey
John Means, Duffy, Winfield and Crall
Emery, Rice and that’s not all

Our art? It’s more than a big gaudy Koons
We’ve got train museums, theaters, tunnels and escape rooms
Indo Arch, Art of Toys and The Sacramento Zoo
The Red Rabbit at the airport and Matias Bombal, too
Memorial Auditorium, Sofia, Crocker, Crest
The Alien Tourist Trailer at South Side Park is the best
Though the severed head on 65th is goofier than the rest
The places to eat are amazing like no other
Ginger Elizabeth, Cookies, Canon, Bacon and Butter
Solomon’s, Chando’s, Vallejo’s, Simon’s, Sampino’s, Evan’s
Rest in peace, Biba, I hope you’re enjoying Heaven
Mother, Origami, Español and Opa! Opa!
Hana Tsubaki, Culinerdy and Tea Cup Café are dopa
The Wienery, Pasty Shack, Nopalitos, South
Put Rick’s, Gunther’s, Pushkin’s and the Squeeze Inn in my mouth
Fox and Goose, Suzy Burger, Taste of Thai, The Kitchen
Stanely, Yum Yum, Spudnuts and Donut Madness are so bitchin’
Old Soul, Chocolate Fish, Identity have coffee that can spark it
Stuff my belly full of hot links and ribs from MoMo’s Meat Market
Mikuni, Sushi Café, Fish Face have no fakery
And nothing is sweeter than New World Bakery

Pre-Flite, Faces, Badlands and The Merc
Don’t go to Sidetrax if you are a jerk
Track 7, The Maple Lounge, Henry’s and Socal’s
B-Side, Zebra Club, Club Raven for locals
Mango’s, LowBrau, The Depot and Azul
If you don’t like The Jungle Bird, then you are a fool
Shady Lady, Dive Bar, Coin-Op and Highwater
Tower Café is good for brunch with your daughter
Virgin Sturgeon and Swabbies have fun by the river
Pied Piper and Chargin’s are fun for your liver
River City Saloon, Zelda’s and de Vere’s
I’m drinking at Club 2-Me and wish you were here
Break things at The Rage Room
Shop at Compton’s Market and Corti Brothers
Listen to Killer Couture and Noise Fest with your mothers
Fairytale Town has a super
Crooked Mile