The American First Act of 2015 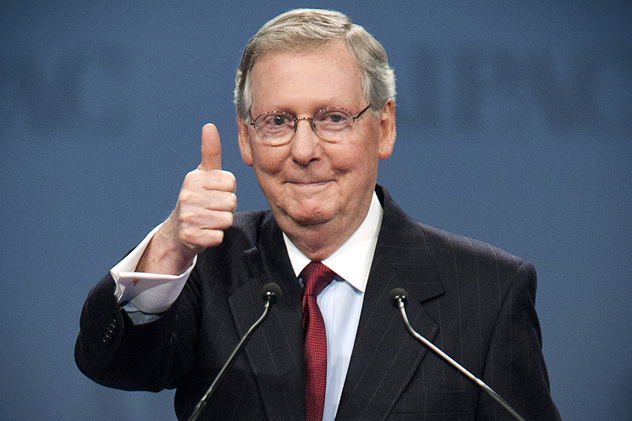 A terribly wonderful thing happened the other day. The folks at the NSA are hoping you didn’t notice, but Congress failed to renew a few key provisions of the Patriot Act, like the ones that let the NSA hoover up all of your metadata from the phone companies and store it indefinitely for inspection. Oops! Making this officially the only good thing he has done, Rand Paul pulled a filibuster again and made Congress miss the deadline.

Calls for celebration from privacy advocates were short-lived as the Senate passed replacement provisions two days later. Fortunately, the new provisions include some of the reforms suggested by the millions of investigations run by both Congress and the White House. This was all to the chagrin of Senate Majority Leader Mitch McConnell, who had previously called for an extension of the existing Patriot Act, so I’m guessing he is plotting his revenge now.

I would not be surprised if he called his revenge bill something stupid like the American First Act. These morons in Congress love acronyms, so it would probably stand for something like “Allowing Me Extensive Rights In Case America Needs to Frisk, Incapacitate, Restrain, Sabotage or Track Act,” because that’s how Mitch rolls. He wouldn’t just stop at the name, though. He, and people like Lindsey Graham and John McCain, want you to believe that this country is constantly in grave danger. For them, we can never be too safe, so we might as well turn the keys over to the NSA and let them do their thing.

Lindsey Graham, being the good Southern gentleman that he is, is probably trying to convince his esteemed colleagues that under the American First Act, your mother should always be allowed to enter your bedroom without a warrant, because he was raised to believe that a child should not hide things from his mother. John McCain would probably agree and add that the government shouldn’t need a warrant to make your mother search your room either. Mitch, being the slow, slick turtle that he is, would probably chime in last and say that all of those ideas sound great and that after the bill passes they can tack an amendment on to an unrelated bill changing the definition of “mother” in the American First Act to include “Officers of the United States Government,” as well.

They’d be off to a smashing start if they actually came up with something as sophisticated as that plan. But as scary as that is, I don’t think they’d stop there if given the opportunity. Lindsey Graham seems like someone that wants to know who all the perverts are. He’s heard about all of those dirty things you sick boys look at on your computers and he wants you to tell him what you are into and which websites you visit. McConnell, who hasn’t seen a naked body in years, will think that is a great idea and will also ask that everyone be required to provide nude photographs of themselves to the government for identification purposes. McCain is too old for sex, but he would like to know what this whole internet thing is about, so he would probably be on board for the whole shebang.

So torture it will probably be, but that still won’t likely be enough for the crusty white trio. McConnell would have barely come out of his shell by that point, and he’d surely have one final zinger of his own. If there is one thing that Mitch McConnell hates more than anything else, it’s Barack Obama. Mitch has prided himself on being a thorn in the president’s side for the past eight years. He has been unrelenting to the point of pettiness many times, so there is a good chance he would do something like that again.

Mitch would probably suggest that, under the American First Act, sitting presidents and candidates for the office of president who make it through the primaries will be vetted by the NSA with the results given only to a select group of congressmen. Those congressmen will get to choose what is made public. With a chuckle, McCain will next add that the president and every president hereafter must provide copies of his birth certificate to any member of Congress that requests it so as to appease crazy constituents. Lindsey Graham would just shake his head and say something like, “Mercy me, you boys are incorrigible!”

This totally could be happening. Perhaps all that’s left to decide is when to drop this bomb. Team mom, Lindsey Graham, is officially running for president now and passing the American First Act won’t be a problem if he wins. Of course we all know that he won’t, but Mitch and John hate making Lindsey cry. He always cries until John and Mitch hug him for like five minutes and it’s just not worth it, so hopefully they wait until Lindsey Graham becomes president before they try and pass something like the American First Act. Otherwise we are fucked, so keep your fingers crossed, America!