The Greatest Thing Since Sliced Bread 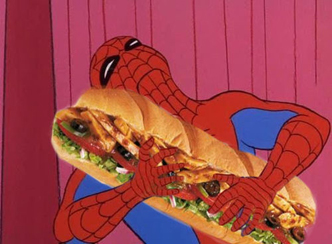 Few events in our brief history on Earth have truly changed how we lived. Some would hearken back to the invention of the wheel, the domestication of animals or the Internet as clear signs of progression. All of these things are super cool and whatnot, but they just didn’t quite satisfy my appetite. I knew our common history had something more to chew on; something that would satisfy my hunger. That something was the sandwich.

It supposedly happened around a card table sometime in the mid-1700s. Our man, John Montagu, the earl of an area in England once known as Sandwich, was a gambling fool who could not even stop playing cards long enough to eat. Instead he had his manservant bring him some meat ‘tween bread while he blew the family riches. Undoubtedly out of distrust for the forever vigilant Montagu, his fellow card players soon began ordering “the same as Sandwich,” to keep an eye on ol’ Johnny sticky fingers. The sandwich was born and the rest is mouth-watering history.

A sandwich, also known as a sub/submarine, hoagie, grinder, torta, hero, Panini, po’ boy, sammie, sammich or a Jared, is comprised of two pieces of bread with something between them. What that something ends up being is completely up to you. Elvis liked his with peanut butter, bananas and possibly bacon. Maybe you just like jelly with your peanut butter and the rest of that shit needs to stay away from your goddamn sandwich! To that I say, calm down buddy… it’s your sandwich, you can have it however you want!

To me, the best sandwich in the world should have a balance of flavors ranging from sweet to salty to tangy and also spicy. The sandwich should not be made on plain white Wonder bread because that shit is gross. Get some grown-up bread and do it right. Keep your tired old vegetables off my sandwich while you’re at it. Unless it’s been pickled, it better be fresh. Even with all of that, a great sandwich will still need some sort of spread to marry it all together. Cheese doesn’t hurt either.

Given that, it’s hard to say what the best sandwich is. I could just decree that cheeseburgers are technically sandwiches and are therefore clearly the best, but longtime readers know I view burgers as on a plane unto themselves. So, what does that leave us with? The Monte Cristo? Philly Cheese Steak? Muffuletta? Cuban?

While all delicious, none of those can touch a Reuben. If done right, a Reuben will come on toasted dark rye bread, slathered in Russian dressing, piled high with slices of warm corned beef (get that pastrami the hell out of here!), melted Swiss cheese and sauerkraut. It sounds funky, but something magic happens when these ingredients come together. You get sweet from the Swiss and Russian dressing, but also tangy crunch from the kraut, while the corned beef adds a good amount of saltiness and spice.

A quality Reuben will put you into a food coma, so it’s not always an optimal choice for those on the go. Fortunately, my other favorite sandwich of all time does not suffer from the same maladies. You’ve probably seen them around a lot more lately, and if you haven’t tried one, you should, because the bánh mì might just be the greatest sandwich in the world.

A good bánh mì sandwich is made on a fresh baguette spread with mayonnaise or aioli, topped with some form of meat (I like pork or chicken), cilantro, sliced chili peppers and pickled carrots and daikon radish. The cilantro and peppers give the sandwich a fresh taste, while the pickled veggies add a nice tang along with some crunch. Throw in a good baguette and the meat of your choice and this sandwich is unstoppable.

But shit, that’s just my opinion. I’m sure you have your own favorite sandwich. You might like head cheese or liverwurst in yours; the stores keep selling it, so somebody must be eating that shit. Perhaps you aren’t as bold, but you still might live for the wondrous things that can be done with Thanksgiving leftovers and some bread. Plain and simple or Dagwooded out, the sandwich is one of our most enduring, versatile and delicious creations of all time. What are you going to put on your bread?