The President of the Future 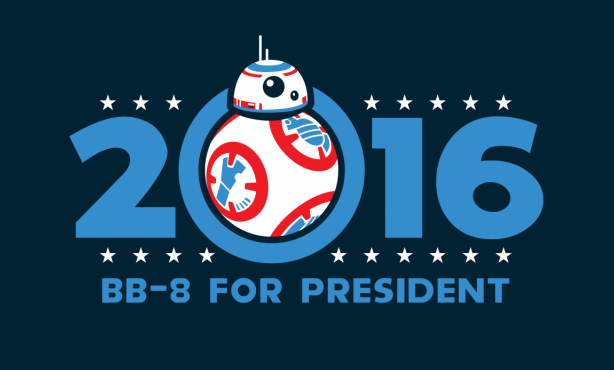 All parties present during the jam are transported one year into the future once the amps are turned up to 11. Getting back is a bit more complicated with the band being required to play the same song that got us to the future, but backwards. Getting the backwards song correct proved to be quite the task for the band and our stay in the future lasted longer than expected.

Fortunately for you, that means I was able to study the news and find out exactly what happened in 2016. Unfortunately, the media in 2017 is as single-minded as the media is now, so the only news available relates to the 2016 presidential elections. Still, what I saw was shocking and worth relaying to you now. Some of what you are about to read will sound unbelievable, but I assure you, I was there and saw it with my own eyes.

By now, I’m sure you are dying to know who the president of the United States is in 2017. The answer to that is a bit more complicated than it might otherwise seem at first blush. You see, while Donald Trump actually won the presidential election in 2016, he wasn’t the president by the time I got there.

Perhaps an explanation is in order. The sinking of Bernie Sanders’ campaign by the Democratic Party will certainly come as no surprise to those who have been following the campaigns. With Bernie out of the way, everyone assumed Hillary Clinton was a shoe-in for the presidency. Unfortunately, Hillary’s jump back to the right during the general election only served to alienate former Sanders supporters, many of whom ended up staying home on election night. That all but assured Donald Trump would be the anointed one come November, and that is exactly what happened.

Of course, the buyer’s remorse kicked in immediately. It took less than 24 hours after being elected for Trump to piss off most of the leaders of the free world. He hadn’t even been inaugurated and several countries were already threatening war. In an unprecedented turn of events, two-thirds of Congress voted to amend the U.S. Constitution to allow for presidential recall elections within days of the results being announced. Less than a week later, all 50 states had ratified the amendment making it law. A recall election was hastily thrown together and by the end of January, President BB-8 Droid (the Sphero version, obviously) was installed into office.

I know it sounds crazy that a droid character from Star Wars: The Force Awakens was elected as the leader of the free world, but it actually makes a lot of sense if you think about it. First off, BB-8 is far more likeable than all of the candidates. It is adorable, and being incapable of speech, it is nearly impossible for BB-8 to offend anyone, unlike Trump. BB-8 is also a much more pleasing shade of orange than Trump. Finally, thanks to the cross promotions done with Dole fruit company for the movie, BB-8 is adored by capitalists the world over for its financial prowess.

In a tip of the hat to older voters out there, BB-8 chose R2-D2 as his vice president, C-3P0 as Secretary of State, Wall-E as the head of the EPA and Optimus Prime as Secretary of Defense. With the egos and political posturing of humans no longer hindering progress, our robotic leaders will manage to do in one month what we have been unable to do ourselves for centuries: achieve world peace. Guided by the belief that George Lucas should not be allowed to make any further contributions to the Star Wars universe, humanity will join as one and peace will spread throughout the galaxy. Hopefully, disclosing this to you all now will not alter these future events, but only time will tell …