The Secret Life of Axel 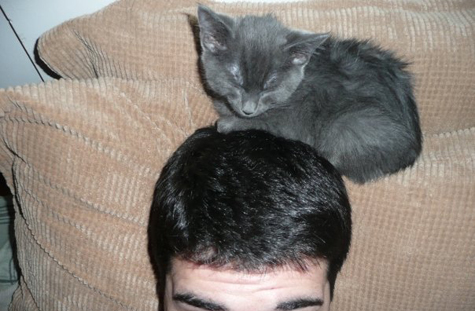 I’m starting to wonder what goes on at my house when I’m out. Often I will come home to find random objects moved from their traditional places. A T-shirt might be found in the kitchen. Sometimes there are strange odors to greet me. As if all that weren’t weird enough, today I came home from work to find my cat, Axel, laying in bed watching the Science Channel.

Normally, Axel greets me at the door with a look on his face like he just slept for 8 hours. I’m convinced this subterfuge was created just to hide the truth about what really goes down at my house when I am not around. When I see weird things, I ask Axel what’s been going on, but he never has a believable answer (I’m sorry, meow is not going to cut it!). Who exactly is this cat? Should I trust him to be in my house alone? Why does he keep putting his toys in his water dish?

I guess after what I saw today, I should give him the benefit of the doubt. He likes the Science Channel, so maybe he is an astrophysicist. He is good at catching things, so clearly he has a physics background. I’ve seen him stare into the sky for hours as well. I thought he was just looking for birds, but maybe there was more to it. His real name could be Neil deCat Tyson! Then again, I haven’t seen any errant math equations written on the walls of his litter box, nor does he seem too impressed with my Google Sky Map app.

Maybe he is an acrobat. I’ve seen him do back flips. He can jump 5.5 feet into the air from a dead stop. I’ve seen Axel jump into a corner, bounce off the wall, bounce off the other wall and run back the way he came. He can squeeze his body into the tiniest of places. If his claws are long enough, he will hang off the window screens. On the other hand, he hates wearing ribbons and sashes, and I think that’s a requirement for an acrobat.

Maybe he’s more blue-collar than that. Maybe Axel is a coal miner. He is the color of ash and, considering the way he likes to scratch his post, he must be a good digger. I could see him rocking a little hard hat and heading into a tunnel to mine some of that sweet, sweet coal. I had him checked out for the black lung, but he seems to be clear. I looked at his driver’s license and it’s only a Class C, so he can’t be hauling coal either. I’ve never seen him work with explosives other than to kick a lighter around. In fact, he seems to be rather afraid of loud noises.

There is one thing Axel is not afraid of. Unfortunately, that one thing seems to be me. I am attacked without provocation several times a day. Sometimes Axel gets wild-eyed, puffs up all his hair and comes at me on his tiptoes. We actually had to institute a ban on any acts of aggression for a period of 10 minutes upon my arrival home. It’s called the “10 Minute Rule,” and I invoke it regularly. With so much roid rage, I’m starting to wonder if he might be a professional wrestler.

Clearly, with his daring acrobatics and maniacal scratching skills, Axel would make a formidable opponent in the squared circle. While I wish he were the return of The Ultimate Warrior, something just doesn’t add up. I’ve never seen any spandex tights lying around the house. I’ve found no empty syringes nor the remnants of any performance-enhancing drugs. His piss test came out clean six months straight. He doesn’t have a catch phrase or a gimmick. He isn’t tan, and I doubt he can lift more than 5 or 6 pounds. The most damning evidence of all is the fact that I’ve never seen him pin anyone. He’s no wrestler.

Maybe I’m just overthinking it. Axel is a wonderfully mysterious cat, but he is, at the end of the day, only a cat. Judging from how often I have to clean his litter box and refill his food bowl, maybe Axel just eats, sleeps and shits all day. And apparently, every once in a while he takes a break from the monotony and catches up on a little Science Channel.