The Time We Got Caught 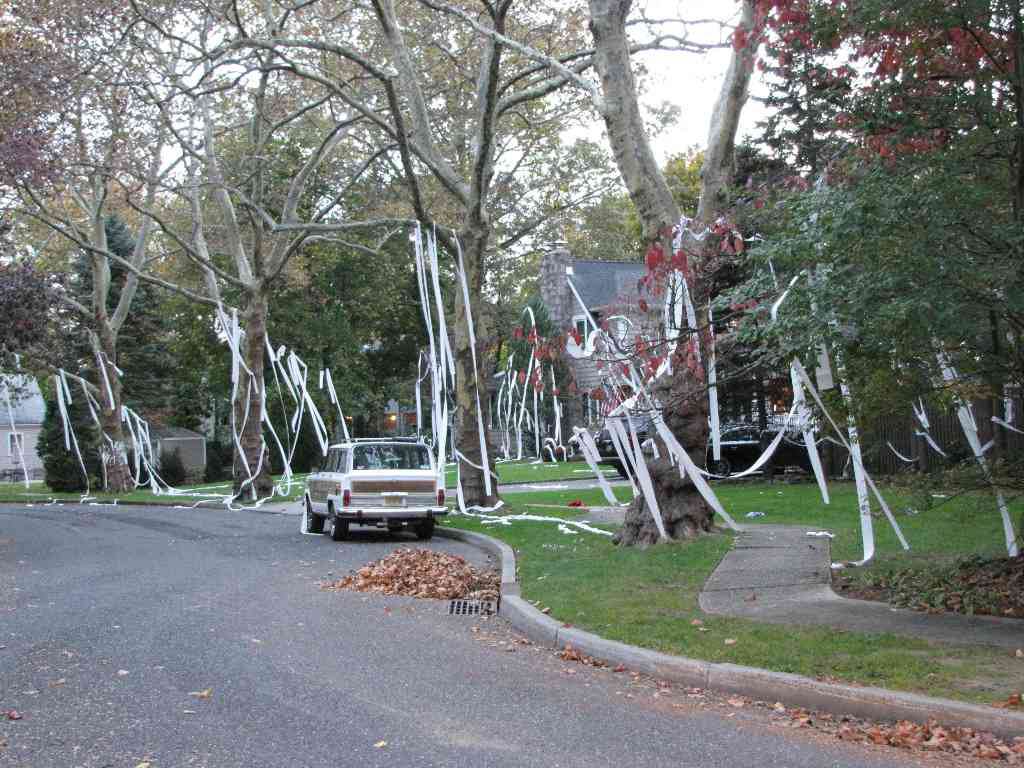 I was a mischievous child. I grew up in a town that did not offer things for its teenagers to do at night or on the weekends, so we had to make our own fun. Usually, that meant trouble and by trouble, I mean property damage. Eggs and toilet paper were our weapons of choice because they were tried and true tools of mayhem, approved by juvenile delinquents across the country.

To us, the T.P. and eggs were not necessarily tools of revenge; they were more an expression of our creativity. We viewed a house as our canvas and treated it with the care and diligence it deserved. We were quite picky about our targets. We wanted to make bold statements and we needed a house with the right features to bring our visions to life. In fact, I’d go as far as to say that the recipients of our eggs and paper should have seen the result of our work as a compliment to the beauty of their homes.

Unfortunately, I did not get many chances to interact with the people whose homes I’d toilet papered. In fact, I can think of only one such incident and it was a real doozy. I must have been in the seventh or eighth grade and I had spent the night at a friend’s house with another friend. The three of us each brought a few rolls of T.P. and couple eggs, so we had amassed quite an arsenal by the time we joined forces that fateful night.

We surveilled the neighborhood before sundown on bike and found the perfect home to lay waste to. There were two very tall trees and one squat, but full, tree in the front yard. These were surrounded by several bushes and shrubs that were pokey enough to ensnare any paper that came into their clutches. The yard was dark and there was a large car nearby to stash our bikes and backpacks behind. To say that it was the perfect house would be an understatement. It was as if we didn’t even have a choice; we had to cover it in toilet paper. And so, we did.

We were in top form that night. The rolls of paper streaked through the sky like paper comets and wrapped themselves around the very tops of the trees. A long stream of white paper hung magnificently between the highest branches of two trees, crossing the yard like a banner reading, “Fuuuuuuuuuck.” Eventually the trees and bushes were so thoroughly full that we moved on to tearing small pieces of paper up to throw around the lawn and in the bushes.

We were having a great time doing great work, which is probably why we didn’t notice someone come out of the house. We certainly should have noticed, but somehow we did not see the man in his early to mid-50s step out of the shadows. He was overweight, hairy and was wearing only a pair of boxer shorts. This man knew that time was of the essence and chose to eschew pants in favor of catching us three idiots red-handed.

“You kids are in big trouble!” he said with a stern voice. We all froze, hoping that we would somehow disappear into the night if we didn’t move. We had never been caught before and had no idea what to do. This half-naked man stood between us and our bikes, cutting off our escape route and leaving us with few options. We could abandon our bikes, but that would have been difficult to explain to our parents and would have severely limited our mobility going forward; or we could stand and face the music.

We sort of chose the second option. He asked for our names and we all supplied suspect aliases before agreeing to help clean up. I told him my name was Kevin Arnold, which I stole from The Wonder Years, and I quickly made up a phone number and address to go along with my new identity. Fortunately, this was in the days before cell phones and our captor got distracted when his wife brought out his pants to slip into while standing on the front porch. We picked up what we could, but some was out of our reach. We suggested that we would come back in the morning with a ladder to get the rest and he decided to let us go.

Of course, we never went back to finish the job, but that was also the last time we toilet papered that house. This man had set his shame aside and had earned our respect in the process (or at least as much respect as a teen is willing to give an adult). Ironically, a few years later when we were in high school, my friends and I ended up meeting the daughter of this man and she remembered us getting caught that night. We all had a big laugh then and my friends and I still laugh about it to this day. Teenage hijinks truly are the gifts that keep on giving.