The World According to Lochte 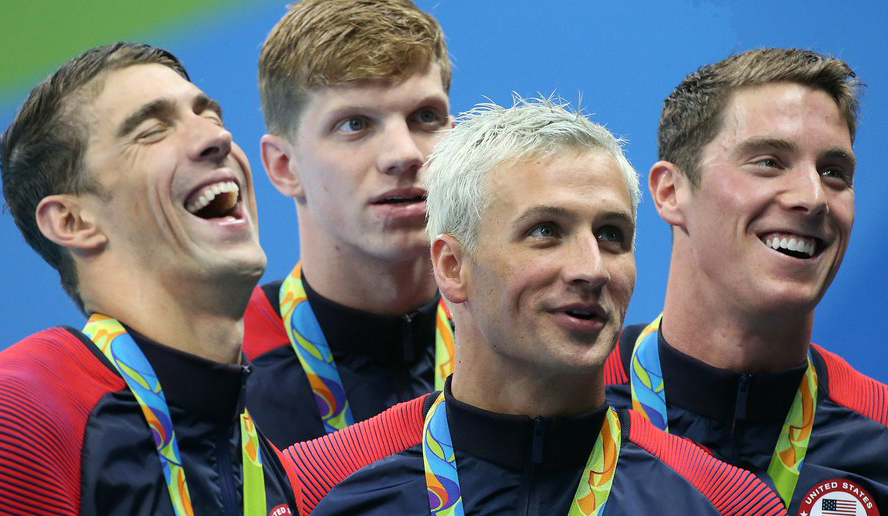 The Olympics have finally come to a close. The torch is extinguished and the Olympic flag has gone to Japan for the Tokyo Games, but not everything has passed. For Olympic gold medal swimmer and American hero, Ryan Lochte, the Rio Games just keep lingering like the green water he swallowed in the pool.

There was an incident involving Lochte toward the end of the Games. If you were to ask Lochte what happened, he’d tell you that, while out celebrating with his teammates, he heroically tore down a dangerous sign, disarmed a ticking soap dispenser, drop kicked a menacing door and put out an exterior wall fire with his gold medal urine at a gas station in Rio. You know, basically your standard hero-level shit. And what did Ryan get for his heroism? He got robbed by a fake cop that hated swimming and America. Total buzzkill!

Of course there are always two sides to every story and if you were to ask the Brazilian authorities what happened, they’d tell it a little differently. The Rio police believe that Lochte and Aqua Team America decided to trash a gas station on their way home from celebrating at the bars like a bunch of bros. Supposedly, there wasn’t even a robbery. The police claim that a security guard stopped them and demanded money to cover the damages caused by the swimmers at the gas station.

“Jeah right!” says Lochte, but that perfectly adequate answer wasn’t enough for the media to let the story die. Per usual, the press is on a mission to destroy another young white man’s life and they aren’t interested in letting the truth get in their way. They’ve spread the lies of the Rio police and made it so no one believes Ryan anymore, but Lochte is not going to allow this character assassination to continue unabated. The man that killed Bin Laden is no gas station pisser!

You read that right, pal! Ryan Lochte is in the Navy SEAL Reserves and is a member of SEAL Team Six. Lochte was instrumental in Bin Laden’s capture, death and burial at sea. Up to this point, Ryan has remained quiet and humble about his covert adventures outside of the pool, but now that his character is under attack, he has decided it’s time to come clean about his time in the Middle East in an exclusive interview with Submerge.

You didn’t really believe that Osama Bin Laden was killed at his compound in the mountains of Pakistan, did you? According to Lochte, Bin Laden was captured in Pakistan and taken back to an aircraft carrier for questioning. Thinking the battle was won, the Navy invited a group of entertainers to the ship to perform at a celebration for the ship’s crew, but the performers turned out to be mercenaries under the direction of Al Qaeda and the ship’s crew was captured.

The mercenaries freed Bin Laden and planned to escape via submarine, but their plans never came to fruition thanks to Navy SEAL Lieutenant Commander Ryan Lochte. Lochte posed as a cook on the ship during the mercenary attack to avoid being locked up with the rest of the SEALs. As Lochte tells it, he was then able to sneak up to the top deck and leap into the ocean to avoid capture.

Lochte later emerged from the cold depths onto the deck of the enemy submarine just as Bin Laden was closing the hatch to make his escape. Ryan was able to flip the hatch open and pull Osama out by his beard just before the sub began its descent into the murky depths. In a final move of desperation, Bin Laden squeezed a shot off from his pistol at Lochte’s head. Fortunately, Ryan was wearing his trusty diamond grill and the bullet ricocheted off his teeth and into the skull of Bin Laden, whose corpse sank into the sea forever.

The real story was hidden from the makers of Zero Dark Thirty for Ryan’s protection, but now that the Rio Olympics are over, Lochte said it’s cool if we tell you all the truth. He’s not here for the glory, he just wants you to understand what kind of man he is. He is the kind of hero who isn’t interested in the fame that comes with heroism. Humble, kind, caring and patriot are the words that describe Ryan Lochte, not gas station pisser or door kicker.

But haters are gonna hate and the Lochtenator knows the deal. Lochte once said, “You could literally be perfect and people would still hate you for being perfect,” and that’s the real story here. This isn’t about a 31-year-old grown man and professional athlete getting drunk and trashing a gas station in a foreign country like a dipshit, this is about tearing down a perfect man out of jealousy for his accomplishments. Just ask Ryan Lochte. He will tell you the truth.