These Are the Droids You Are Looking For 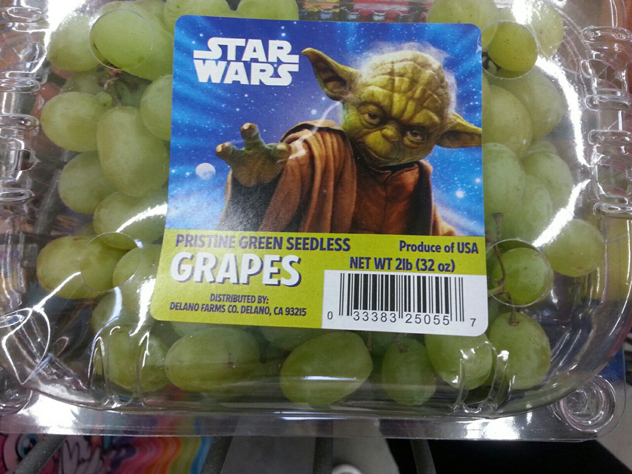 If any of your five senses currently function, then you already know that a new Star Wars movie is out now. I have yet to see it, but I was happy to hear that George Lucas wouldn’t be around to fuck it all up again. Lord only knows what kind of despicable character he would create if given another chance. Disney certainly wants the world to believe that the old Star Wars is back, as those rat bastards reportedly paid $4 billion to remove Lucas’ iron chokehold from the neck of LucasArts and its crown jewel.

You read that right. Disney paid $4 billion for Star Wars. Now, it costs a lot of money to keep Walt Disney’s head frozen, so Mickey Mouse and Co. need to get that money back, toot sweet. That’s why Disney is wasting no time cashing in on their newest baby. The ads and licensed products are almost everywhere.

It’s nearly impossible to watch TV or go anywhere in public without seeing something related to Star Wars, whether the pairing makes sense or not. For example, did you know that Sith Lords eat spicy Popchips and that the Rebel Alliance keeps the troops fed with $5 foot-longs from Subway and Campbell’s Chicken Noodle Soup? Apparently, in the power vacuum left behind by the fall of the Empire, Verizon stepped in to handle cell service for both the Rebels and the remnants of the Imperial forces alike. And of course, none of them are getting anywhere unless it’s in a Jeep, Chrysler, Dodge or Fiat, because cars apparently work in space.

Where will it all end? Are they going to start selling tauntaun meat at Safeway? You might laugh, but in Europe they are already selling Darth Vader Foie Gras and Anakin Skywalker Chicken Hot Dogs stuffed with ketchup, so it’s really not much of a stretch. On this side of the pond, you can buy oranges with BB-8 droids, apples with Darth Vader and grapes with Yoda on the bag, right now. RIGHT NOW! WHY ARE YOU STILL HERE? GO BUY THEM DAMN YODA GRAPES, ALREADY!

Sorry, I got caught up in the fever. It’s hard not to; like I said, it’s almost everywhere. And therein lies the problem. Star Wars is almost everywhere, but it’s not everywhere. It could be in more places. If this advertising campaign has taught me anything, it’s that more is better. There has got to be something else we can slap a picture of a Chewbacca on.

I feel like those are pretty obvious tie-ins, so I’m kind of surprised they were overlooked. Chewbacca hair products are another prime example of a missed opportunity. He is covered in hair for Christ’s sake! Hell, you could have even gone with Ewoks for the baby shampoo. It doesn’t matter if they are in the new movies or not. If it ever had something to do with Star Wars, it’s fair game.

It could have been perfect, but instead we have this. How can I survive without C-3P0 gold teeth, or Jawa contact lens cleaner? Why doesn’t my doorbell sound like a blaster going off every time it rings? Life without these wonder products sounds dull and depressing, and I don’t even have my Darth Vader Anti-Depressants to help me through it all.

That is a travesty. That shouldn’t happen. We can do better and we will. Advertising execs, take a cue from the title of the latest Star Wars movie and let the Force awaken in you; and by that I mean, don’t stop forcing this crap down people’s throats until they see this damn movie … or else!