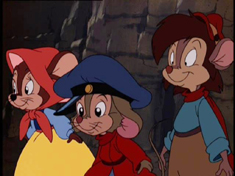 It’s the land of opportunity, or so we’ve been told. When this country began, people held a romantic belief that a poor immigrant could come to America and through hard work alone, become a rich man. That’s right, anyone with enough moxie could hit the big time! It was supposed to be a perfect place. Even immigrant mice at the time sang, “There are no cats in America and the streets are paved with cheese!”

They called it the American Dream and it stood for the idea that every man could achieve success through hard work without being hindered by his class, race or creed. Those early Americans hoped for fairness in an otherwise unfair world. It was a great idea, but it rarely held up to close scrutiny.

Rags to riches stories are the exception to the rule. If it were the norm, we wouldn’t be having a yearlong protest against 1 percent of the country. For all the Mark Zuckerbergs, LeBron Jameses and Leonardo DiCaprios in this country, there are millions of John Q.s who end up working at McDonald’s, Wal-Mart or Applebee’s. Now, some of those people are surely lazy and find themselves cleaning pee off a slide for good reason, but many of them work their asses off (sometimes at multiple jobs) just so they can feed their kids and pay rent.

Poverty isn’t easy to break free from. Those kids at home have a good chance of being poor when they grow up too. The schools in their neighborhoods are underfunded and overcrowded so their first 12 years of education are going to suck, if they even graduate. Without a scholarship of some type these kids won’t likely go to college because they can’t afford it. Without a college degree their job options will be similar to those of their parents; places where hard work might let a person attain such illustrious titles as head waiter but that won’t offer much toward upward mobility. It’s hard to dream when you don’t have time to sleep.

If class doesn’t get you, maybe racism will. It took this country over 100 years to declare an end to slavery, another 100 years to end blatant segregation and another 54 to elect a half-black president. Despite that progress, racism still exists. According to the Center for American Progress in the second quarter of 2011, the unemployment rate for African-Americans was nearly double that of whites. The Department of Justice has found that, by 2007, the number of African-Americans in prison was about five times greater than the number of whites. It’s hard to dream when you are locked in a cage.

When the color of one’s skin just isn’t enough to keep them down, maybe their choice of religion will. At one point or another, everyone hated the Catholics, the Jews, the Quakers, the Protestants and the Mormons. Now we’ve decided it’s Muslims we hate. We profile them at airports and panic when they leave their bags unattended for a second. We won’t let them build mosques in our cities and yet, we call them extremists. It’s hard to dream when people keep telling you that you are going to hell and they won’t let you pray.

Despite its faults, we still chase some form of the American Dream today, only now our dreams tend to ignore the whole fairness and equality thing and just jump straight to the cash. We’ve devolved into a society where reality stars are more important than presidents and we pay bank CEOs millions of dollars to steal from us. In rewarding these idiots and assholes, we’ve managed to convince ourselves that we too should be rich without having to really work for it.

We want the huge house with the oddly shaped brightly colored couches. We want a different $50,000 car to drive for each day of the week. We want clothes, ho’s and 40 oz. We want enough money so that we can swim in it like Scrooge Motherfucking McDuck! We want it all, and we want it because we can juggle while we tap dance, we can burp the alphabet or we have a mole that looks sort of like Justin Bieber.

We need to remember that dreams aren’t reality. They are jacked-up, usually nonsensical but sometimes insightful creations of our subconscious minds. The real world is out there and it needs your help. It’s hard to dream when there is nothing left. Eyes open, wide awake!