Nadia Ali keeps dance floors grooving all across the globe

Nadia Ali lives the kind of life many of us dream of. She travels the world, works with some of the most heralded artists on the planet and, as if all that wasn’t enough, has made a name for herself and a successful career doing what she loves.

A quick glimpse of what the life of an internationally renowned (and coincidentally Grammy-nominated) singer/songwriter is like can be found on her Twitter feed. On April 29, 2012 after returning from performing in Miami, she wrote, “NYC. Home sweet home.” The very next day, she tweeted, “Lots of packing to do for my trip to LA tomorrow.” As the saying goes, there’s no rest for the weary.

“You know, the grass is always greener on the other side,” Ali tells Submerge. “I envy people who have very stable lifestyles where they just stay in one place, but there was a time where all I wanted to do was travel.”

As it turns out, the trip to Los Angeles has deeper ramifications than just a simple concert or brief vacation. It’s a move that may turn out to be permanent.

“This is my month to try out L.A,” she confides. “Based on what happens this month determines how quickly I move, or whether or not I move for sure, but so far it’s looking like it’s happening.”

Born in Libya to Pakistani parents, Ali moved to New York City’s borough of Queens at an early age. When she was just 17, she was introduced to producer Markus Moser. The two formed electronic duo iiO, and in 2001 released the single “Rapture,” which thrust Ali into instant recognition and coaxed people onto dance floors worldwide. In 2005, Ali began pursuing a solo career and became a highly sought-after vocalist in the EDM world. In 2009, she released Embers, her solo debut. Lush and intoxicating, Embers blended pulsating digital beats with Ali’s deft songwriting skills, creating an album that would appeal to pop music lovers and dance music aficionados.

Currently, she’s embarked upon a North American tour that spans from now through the end of July. In the midst of that, she’s also working on her sophomore release, Phoenix, which is, as of now, without a solid release date. Ali filled us in on her upcoming album and also shed some light on her most recent collaboration with superstar electronica producer BT in the following interview.

You’re always being tapped to work with other artists, and in May you have a new single, “Must Be the Love,” with BT debuting. How did that come about?
I had been in touch with BT through Sultan and Ned Shepard. I had to ask BT a question about something business related, and we started talking. It was interesting because I’ve admired his music since I first started doing dance music. I think it was a few months later that I got an email from BT, and he said, “Would you like to try writing something to this track?” and of course I was all over it, because I had been a massive fan for such a long time. He’s a pioneer in electronic music. I wrote the song in Toronto, and that was it. I sent it over to him, and he loved it. He tweeted to his fans how much he was a fan and that he’s excited for the song. Very recently, Arty jumped on the track. It’s been good. I’m excited, because the song is very meaningful to me.

Meaningful in what way?
The original title of the song was “We Heal.” It’s all about how when we get into a really great relationship, our life changes for the better. The past wounds and the past scars that we have are healed by a new love. It has to do with love as a healing factor.

Does that affect the way you write at all?
I never think about who’s going to produce it… Actually, that’s not true. When it was BT, I knew I had to bring something to the table that matched BT. I brought a meaningful song, because I think he’s a meaningful artist. I have other artists where I do fun pop songs, because I know it’s going to be a commercial song that they’re looking for. I think it just depends on the artist.

You’ve had Grammy nominations and have been at this for a while. It’s neat that it’s still a thrill for you to work with artists you admire.
Oh absolutely. I’m a very lucky girl. I’ve been in this career for 12 years. It’s been a good gig.

Other than collaborating with other artists, you’re working on your second solo album now. I know it’s still in its early phases, but how is the writing going on that for you?
Well, I’ve been writing tracks for it since I finished my first album, but the issue is, when you’re touring, how do you make time to continue recording? So that’s what I’m trying to work on right now. I’m being a lot more proactive about it now. That’s why I’m in Los Angeles. I feel like Los Angeles is giving me that new inspiration that I need, so I’m excited.

I was reading that the new album Phoenix is going to be a bit more dance-y than your first album Embers.
I’ve been doing dance music from the start of my career, but Embers was more of a self-indulgent album where I wanted to express myself as a singer/songwriter. I’ve done a lot of music since then, and I feel like my fan base is itching for a dance album, so I’m giving them what they want.

Before we were talking about the track you did with BT and how the lyrics were meaningful to you. When you write a dance track, does that change your mindset?
It really depends on the type of song the artist is looking for. I know some artists want a really catchy commercial song, and they don’t really care about lyrics or a message in songs, and some guys really care about the music in the song. I work accordingly. It’s really different for every situation, for every different producer.

You were talking about your touring schedule, and you’re pretty much on the road between now and the middle of the summer. How is it going so far and what can fans expect?
This tour, most of the dates are in the United States, but after that, I’m going to work on really developing my live show and bringing it to the next level. That’s a goal. You always want to put it out there, but until you get to that stage where you have time to do it, then you have a better picture of what’s going to realistically happen.

What kind of stuff are you looking to incorporate in the future?
I know it’s going to have a lot of LED screens, lots of lights. Lots of glitz and glam. 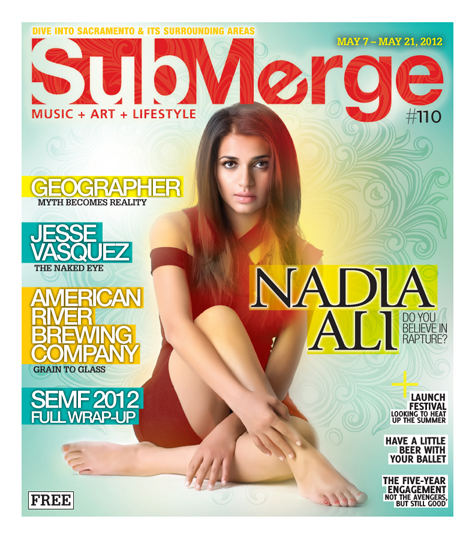 Nadia Ali will also be debuting some new tracks on her current tour, so Sacramento should make a point to go to District 30 on May 24, 2012. Also on-hand will be Trevor Simpson, and the event will be hosted by Midnite Events, AJ Memar and Stephanie Weaver. For more info, go to http://district30sacramento.com/, or call (916) 737-5770.