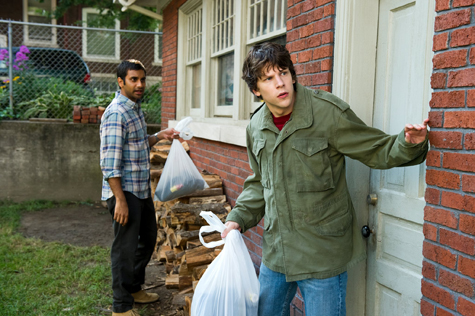 Real friends will do anything for you. They’ll always have your back, be your shoulder to cry on or kick you in the ass if you need it and buy you a beer afterward. They may even help you rob a bank if you were kidnapped and your abductors strapped a bomb to you and promised to blow you to bits if you didn’t come up with $100,000. The last example may sound far-fetched, but hey, stranger things have happened. In any case, it’s the scenario explored in 30 Minutes or Less, the latest collaboration between The Social Network’s Jesse Eisenberg and his Zombieland director Ruben Fleischer.

Eisenberg stars as Nick, a pizza boy and serial underachiever. He’s stuck in a job he hates, but doesn’t seem to be lamenting in the sort of malaise you’d expect to find in a twenty-something and going nowhere protagonist. Nick is content in his adolescence–at least enough that he doesn’t feel the need to go out and find a real job like his best friend Chet (Aziz Ansari), who has just “sold out” and become a teacher.

As friends go, Nick and Chet aren’t really that cool to each other. Chet is partially responsible for ruining Nick’s parents’ marriage, thus ruining his life; Nick on the other hand pines for Chet’s sister Kate (Dilshad Vadsaria) and even slept with her once, a serious infraction of the bro code. Meanwhile, in the swanky part of town, another bromance has villainy in its heart. Dwayne and Travis (Danny McBride and Nick Swardson respectively) are probably even bigger losers than Nick, though Dwayne gets to live in the lap of luxury. His ex-marine dad (Fred Ward) won $10 million in the lottery. He lets Dwayne and Travis dick around the house at their leisure, but he’s not all that happy about it. Eventually Dwayne tires of his father’s constant jibes and cooks up a hair-brained scheme to cash in on the old man’s dwindling fortune–they’ll kill him of course. They contract a hitman through a local stripper named Juicy, kidnap Nick and strap a bomb to him and wait for their plan to unfold. And it does. Sort of.

30 Minutes or Less harks back to another high-profile comedy of the summer of 2011, Horrible Bosses, which was also a laughfest that used murder as its central motif. Surprisingly enough, 30 Minutes…, though it has a younger cast and is aimed at a slightly younger audience, is the darker of the two. It’s not black humor by a long stretch, but the film’s consequences seem dire. Nick does have a bomb strapped to his chest, after all. After Nick and Chet miraculously pull off their bank heist, a battle of wills ensues between Nick and Dwayne that actually layers some level of suspense on top of the laughs. 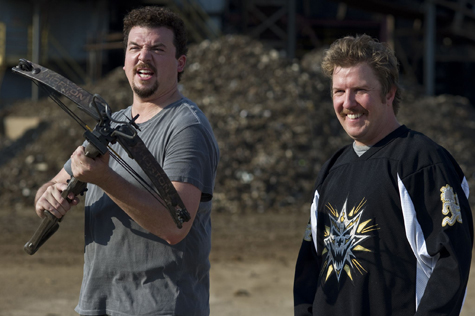 Overall, though, this is a silly, quirky caper and we’re all the better for it. It’s also a great vehicle to see three sharp comedians and one wunderkind actor light up the screen. Those familiar with McBride’s shtick will get plenty of what they expect from HBO’s Kenny Powers. Good news is he throws in enough curveballs as Dwayne that it doesn’t seem stale. Ansari, wielding the least amount of star power, doesn’t get lost in the shuffle as the ex-slacker doing his best to shed the mantle of man-boy and make something of himself. Ansari’s lone classroom scene, in which he embarrasses one of his students in front of the rest of the class, is one of the film’s highlights. Eisenberg seems less the Michael Cera clone here and portrays a more masculine front that suits him well as the leading man. Swardson, though, really sets himself apart as Travis, Dwayne’s soft-spoken but ultimately moronic sidekick. There’s a lovability to the affable yet devious Travis that even makes his more ignorant/racist comments seem almost charming.

The moral of the story here is that friends have to stick together–no matter what. 30 Minutes or Less will remind you just how important your best brochacho really is. This is perfect viewing for your next man-date, though you’ll probably want to sit at least one chair apart (because you’ll need to put that six-pack you snuck in somewhere).