A Million Ways to Die in the West

If you’re a Family Guy, American Dad or The Cleveland Show fan, then the A Million Ways to Die in the West trailer has probably caught your eye. I mean, almost everything Seth MacFarlane touches turns to gold, right? Almost everything.

Pan to Arizona 1882. We are in the West, where everything sucks. People die from any and everything: diseases, bar fights, snake bites, freak accidents. It’s an every-man-for-himself kind of world—the kind of world where you have to fight for your life. Literally, you have to fight for your life. Enter Albert Stark (Seth MacFarlane), a hopeless nobody who makes his living as an unsuccessful shepherd (like, really unsuccessful…his sheep end up on the roof. Don’t ask how that’s possible). He is challenged to a duel to settle a debt he owes; but because he is such a coward, he backs out and loses his girlfriend, Louise (Amanda Seyfried), in the process.

The movie basically follows him as he tries to mend a broken heart (broken hearts are terrible, even in 1882) and make meaning of his sad and pathetic life, all while showing that there are a million ways to die in the West. Surprisingly, there were a lot of graphic death jokes (well, maybe not surprising, since Family Guy and American Dad can get pretty gruesome…still, I wasn’t expecting it); of course there were lots of poop jokes, as well as your basic slapstick comedy. 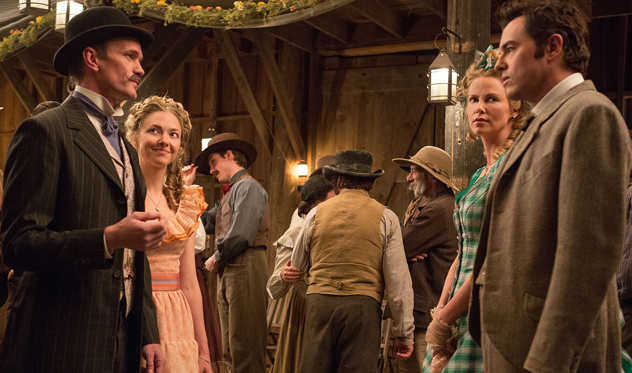 I was really rooting for this movie. I mean, I love Seth MacFarlane and I thought Ted was amazing. Also, there was a great cast in this movie. Sarah Silverman was in it! Let’s just let that sink into your brains. Yet, despite the great cast, the movie was just lackluster. There were funny parts; I did chuckle a bit. But the jokes seemed forced and it was pretty much the same joke over and over again: people die in the West because it’s 1882, here are all the different ways people can die, and for good measure, here are some poop jokes and drug references. I guess it was pretty much just one long Family Guy episode except that it wasn’t that funny. It wasn’t terrible; it just wasn’t the greatest. It was all right.

And in the end (in classic love story fashion), you learn that love conquers all and you have to fight for the dream that’s a wish your heart makes. I haven’t completely given up on Seth MacFarlane; I’m still (not so) patiently waiting for a second Ted movie and a Family Guy movie and I will still watch all of his shows religiously. He just kind of missed the mark with this one. But, that’s OK because you can’t win ‘em all, right? All in all, I probably wouldn’t recommend this movie but, if you’re a Seth MacFarlane fan like me then you’ll probably end up seeing it anyway.

And let me just note (especially to the movie patrons who were sitting behind me): DO NOT BRING YOUR CHILDREN TO THIS MOVIE. If you have a child and you are planning on seeing this movie, then hire a babysitter and have yourself an adults night out. This movie is graphic (like, a surprising-amount-of-blood type graphic), is literally full of cussing, contains some vagina jokes and has some drug references. I repeat, it is not kid friendly (also, it’s kind of really annoying when a 5-year-old talks through a whole movie), and all of the jokes are just going to go over your child’s head anyway. Plus, they probably shouldn’t be seeing (and hearing) all of the graphicness of the movie. Their minds are impressionable, or whatever.