Directed by Clint Eastwood, who in five years will be a nonagenarian, American Sniper is based on the life of Navy Seal Chris Kyle, “the most lethal sniper in U.S. military history.” Released in 2013 as an autobiographical account, Sniper the film strives to recreate his wartime trials and tribulations, both at home and abroad. Hollywood heartthrob Bradley Cooper was tapped on the shoulder to portray Kyle, and over the course of 134 minutes, Eastwood takes us from Kyle’s Texas roots as the son of a patriarch, through his four tours of duty in Iraq, whereupon he tallied 160 confirmed kills and the endless respect and admiration of his combat brethren. But for all the “Legend” (his nickname), Kyle’s life back in the States between tours is far from ideal, as the continued killing and horror leaves him a distant father and husband.

If all that seems familiar, well, that’s because it’s basically The Hurt Locker. Trade one field of life-and-death military expertise for another, and you’ve got the exact same story. Which isn’t to make light of Chris Kyle, soldiers with PTSD or the sacrifices anyone makes in the name of whatever aspect of life they deem most important…it just is what it is as far as original film goes. American Sniper simply adds very little to the war genre as far as newness. In fact, the family angle feels not only tired, but pretty much flops throughout. Sienna Miller does her best to summon up the angst, fear and confusion of a wife/mother left in the lurch, but with little commitment to the thread in general, there just isn’t much of anything to work with.

The tick-tock of American Sniper is its gritty war violence, which is precise, abundant and unflinching. You could certainly make the case that this as well is nothing new, but attention to detail and realism can go an awful long way in a war drama. There are scenes in this movie that take your breath away; and Cooper is absolutely believable as a soldier, which is easier said than done. I recently re-watched Blackhawk Down, for example, and was mortified by how truly awful Ewan McGregor is. With a rifle in-hand he resembled something akin to a naked Roseanne Barr on roller skates. And when was the last time you watched Platoon? Charlie Sheen gives a performance worthy of 10,000 laughs, and that thing won Best Picture. And don’t even get me started on Lone Survivor. 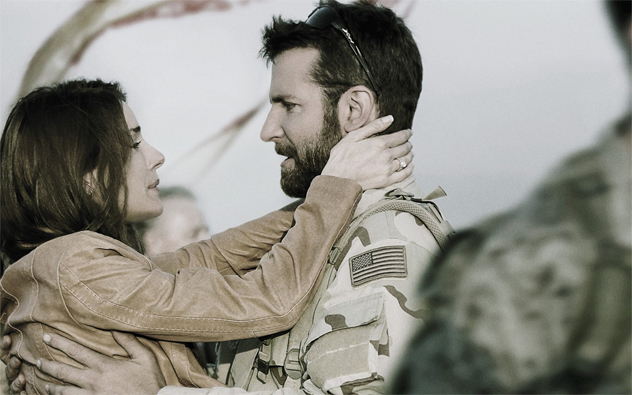 You may hear the critique that Cooper’s dialogue is simplistic and clichéd, hickish even, as it frequently references God, country, brotherhood and the like, but let’s be real here. Most great war films present soldiers to be eloquent wordsmiths, poets in the face of death with just the right speech for just the right moment. But for every Hemingway, there are countless G.I. Joes. That’s not meant to be insulting, it’s just that films like The Thin Red Line, fabulous as they may be, are not especially accurate representations of the average soldier’s vernacular. And while it may be insensitive for Kyle to refer to the eastern part of the world as “evil,” or its people as “savages,” it’s worth remembering that 44 percent of the American military is from the South, with Kyle a Bush-loving Texan. This is how lots of people think, so why not portray as such if that’s the truth behind the character? Whether you feel Eastwood is presenting this story for the sake of pushing his own agenda, or just wants to paint a semi-accurate picture is up to you.

But even the battle-centric aspect of the film isn’t without its flaws. There’s a clunky thread that attempts to follow and link the exploits of a fellow Iraqi sniper, as well as a rather preposterous finale. And at times it feels as if Chris Kyle’s story isn’t being told so much as it is being showcased, the body count racking up more like a video game than a film. All told I was surprised to see American Sniper receive as many nominations as it did, especially that of Best Picture. But then again the Academy seems to have a never-ending soft spot for films of this ilk, be they exceptional or just worth seeing.