Dec. 3, 2015, will be something of a milestone for trash fans; in the midst of giant international blockbusters, a locally produced grindhouse film will make its debut on the three-story Esquire IMAX screen in Downtown Sacramento. Promising a decidedly different “epic” experience, Badass Monster Killer is the third and most ambitious feature-length film from Christy Savage and Darin Wood, the filmmakers behind the legendary Trash Film Orgy, TFO Productions, Zombie Walk and Carnival of the Dead. Pitched as a hybrid meeting of Shaft and H.P. Lovecraft, the film not only meets these expectations, but bursts gleefully (and gorily) through them from one over-the-top scene to another.

Badass Monster Killer follows Jimmy Chevelle (Jawara Duncan), a tough-talking undercover street cop, secret agent and all-around ladies man whose only goal is to put an end to the diabolical, supernatural occult bullshit taking over the streets of downtown Camaroville. Behind the scenes of evildoing is Chevelle’s nemesis, Reverend Anton Dellamorte (Ryan Cicak) who, along with a bevy of local pimps, plans to unleash an ultimate, tentacular evil upon the city by getting his claws on the Necronomicon. Along the way, Chevelle must navigate a treacherous path of friends, foes and foxy ladies, including Lola Maldonado (Amy Geiger), princess of the criminal underworld.

The world of BMK is heavily immersive and unlike anything else we’ve seen in TFO’s filmography, from 2008’s Monster from Bikini Beach to 2011’s Planet of the Vampire Women. Camaroville is a painstakingly realized, neon-drenched animated landscape, replete with distorted expressionist buildings and littered in every shot with in-jokes and sly references down to the smallest graffiti or glowing sign. The result is a living encyclopedia of the Trash Film aesthetic, packed to the brim with strip clubs, acid-spitting mutants, sexy cult members and, most importantly of all, buckets upon buckets of gore.

Although there is a galaxy of unpredictable factors that go into a film achieving “cult status,” the folks at TFO productions seem to have nailed it. More than three years in the making, Badass Monster Killer is layered with so many hidden gags and double-take causing, spew-your-beverage-out rewatchable moments that the film will be a must-own on DVD. It doesn’t hurt that 100 percent of the film’s DNA is from pure cult stock, from classic blaxploitation classics such as Superfly and Sweet Sweetback’s Badasssss Song to Lovecraft, the cultiest of cult horror authors. Viewers should prepare for a monstrous onslaught of Shoggoth, Fungoids from Yuggoth and a likely visit from Cthulu itself.

We recently caught up with the co-founders of TFO, Darin Wood (director) and Christy Savage (producer) to interrogate them about their latest project and the mutual cult obsessions that have made their creative power what it is today. 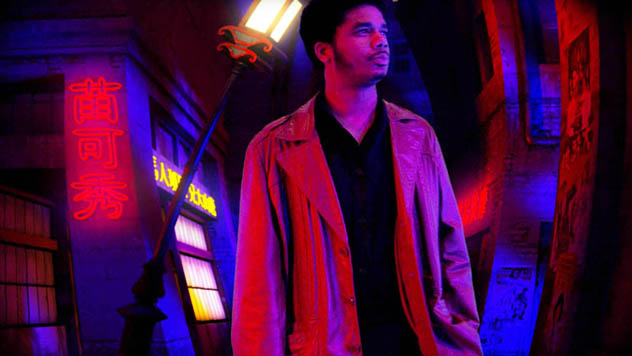 What are your filmmaking backgrounds? How did we get to the TFO productions we see today?
Christy Savage: Darrin and I first started before we were even dating, when we were just friends. We were working on films together in the early ‘90s. Back then, we were shooting on Super 8 because video was still pretty shitty at that point, plus Super 8 was kind of a “cool” thing to do. We ended up not finishing those movies after running out of money. After that, we did a cable access show for many years called Deth’s Oogly Hed. It was like a horror movie magazine show, and we showed a lot of movie clip…We would do themes, like “How to be a Successful Slasher Movie Killer”. That led into the annual film festival (Trash Film Orgy) at The Crest. By 2005, The Crest Theater had put in digital projection, home video was looking better, and that was the catalyst that made us go “Holy crap, It’s time for us to start making movies again! We have a place we can show stuff, we have a crew, let’s do this!”

What was the genesis of BMK as a project? How did that brainstorming session work?
Darin Wood: On paper, it wasn’t as freaky as it is today—it was more of a straight-up urban horror movie with on-site location shooting. I thought we couldn’t do it—we would have to get permits to shoot in alleys in downtown Sacramento, and all that stuff. And then one day I realized, “Oh, wait, I could do all the backgrounds with CGI!” I can’t make them look like real buildings, but If I make them all tripped-out and bent and stylized, it won’t matter! The realism doesn’t have to come into play. After a while I started to like that idea even more. No one can say “Oh, that part didn’t look real.” It’s obviously not real! The buildings are cartoons! It gives you a lot of freedom. It doesn’t have to look real, it just has to look cool and colorful.
CS: We’ve always been big fans of blaxploitation and horror, and Lovecraft’s work, so it was only a matter of time before we started putting them together. I remember we talked to one of our distributors for Planet of the Vampire Women over a lunch. Darrin mentioned having an idea for a blaxploitation movie, and he was like “Don’t do that! That’ll never sell, especially in the international market.” Of course, they went out of business six months later. Luckily we didn’t listen to that guy.
DW: He didn’t get it. 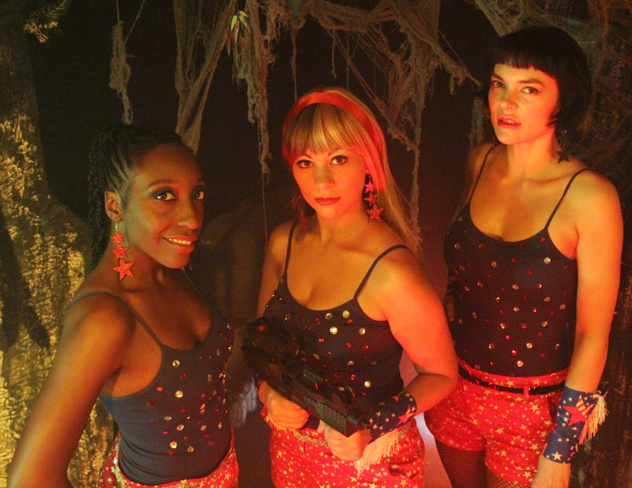 How much does the Cthulu mythos come into play in the film?
DW: People out there that are real hardcore Lovecraft fans, they’ll get some references here and there, but it’ll probably be pretty silly as far as relation to the mythology goes.
CS: I was reading a note though, on the H.P. Lovecraft Film Festival website yesterday, and they were talking about there actually being a pretty good audience for things that make a little bit fun of the whole mythos, because a lot of the horror is so serious, that people enjoy having a release—kind of similar to Roger Corman’s take on always having jokes to put in your horror movies. I mean, just look at Re-Animator! Did that take itself seriously? Come on! [laughs] And that’s probably the best Lovecraft movie out there.

Badass Monster Killer seems like a big step up in scope from your last film, Planet of the Vampire Women.
DW: And if you were to see Bikini Beach, it’s definitely a big step up from that, too. In between our first films, there was stuff that we earmarked to say “hey, let’s do better in this department.” Someone recently asked me if there was different software involved, and I thought about it … It was the same camera, the exact same editing software, the exact same CGI technology from Vampire Women, it’s just that I’ve learned more tricks. At one point when I was working on it, and it was taking a long, long time, I could at least look at it and say to myself, “It looks like I imagined.”

There’s quite a few familiar faces from your other productions. What can you tell us about the star of the new film, Jawara Duncan?
DW: Jawara Duncan was also the male lead in Vampire Women. He’s super good, has an awesome sense of humor about himself, and also, we did a lot of physical stuff like fight scenes, even when he’s up against invisible monsters, and he was super good at that. He came into this one already cast—we never considered anyone else. With fight choreography, sometimes you’ll get guys that are all over the map, but Jawara has been consistent, and it makes the editing so much easier. He just gets it. He was able to do a lot of things physically and comedically, it was great.

Will we be seeing any more Badass Monster Killer adventures in the future?
CS: We currently don’t have a script for Badass Monster Killer 2, but who knows, if this one goes viral …
DW: This is just my own hypothesis/speculation. When we did Vampire Women, Paul Allen and I did a comic book for BMK. Rather than have it just be a straight adaptation of the movie, we told another story featuring some of the characters that survive and whatnot. It had Jimmy Chevelle in it, with a completely different storyline. We didn’t finish, and it’s not going to be done in time for the premiere, but sometime in the future, we might return to it or, if a sequel became possible, I’d be down to use that as a skeleton for the new script. It could happen! 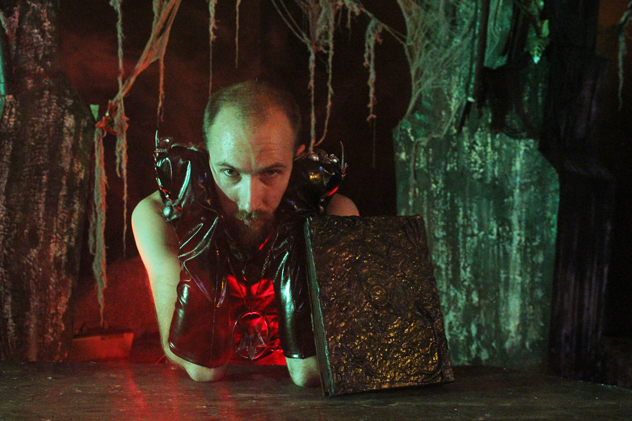 What does the elevator pitch for Badass Monster Killer sound like?
CS: It’s kind of like Shaft meets Lovecraft. Lots of blood, lots of boobs, lots of monsters. That translates into any language—great for the International market!

How did BMK get to have its premiere at the Esquire IMAX?
CS: We were lucky with our former partners at The Crest, working with them, still, because of some of the connections we had and mostly because of the reputation we’ve built with the last couple of movie premieres. With the last one, Planet of the Vampire Women, we almost sold out The Crest. We have a pretty good following in town, so we were able to go to the IMAX and pretty much convince them to take a chance on us, you know, “We can fill your theater- we can do this!” A little bit of clout, and a good reputation, and they’ve been great to work with, so we’re really looking forward to this.
DW: I think the IMAX experience is gonna be really great. For us, with the surround sound mix, which nobody does at our budget level, I don’t know if we could have done it at too many other places, to really do justice to the audio. The picture is the picture, and it’ll be huge and everything, but for us, it really had to be the surround sound.

Philip Baldwin’s soundtrack for BMK seems pretty essential to the plot. How did the process for that work?
DW: When we started filming, I started thinking about integrating the blaxploitation feel into the soundtrack. We started talking about the Curtis Mayfield soundtrack for Superfly and how Mayfield is almost like another character in the film, like the narrator—he’s telling you about all the stuff that’s happening on screen, or he’s commenting on the characters. That’s all it took for Phil to get excited about that idea, and it comes out in the end result. It’s really funny, and I haven’t even figured out all of it—some of the lyrics are really buried down in there. But the composer has always been like that, from Bikini Beach onwards. He mixes in some buried moments of dialogue that I still come across in the last couple of films.

What does the future hold for TFO films and events?
CS: We’re still trying out new venues for the film festival; We’re going to get this film out to a wider audience on DVDs, VOD, additional screenings in other cities … and then start another movie! Also, Zombie Walk will take place next year as always.
DW: There’s a bunch of scripts that are done, a bunch that are partially done, at some point we’re gonna have to decide what we wanna do.
CS: I’m always voting for the giant armadillo movie …
DW: I’d like to do something that can make use of the CGI city again, because it took three years to put together! [laughs]

What should new viewers/potential fans expect at the Dec. 3 premiere?
DW: I think what you need to bring to the table if you’re a new viewer or not is just a sense that the film, and all of our films, don’t take themselves too seriously, I think they’re all fun.
CS: Fun! Fun is the key word. 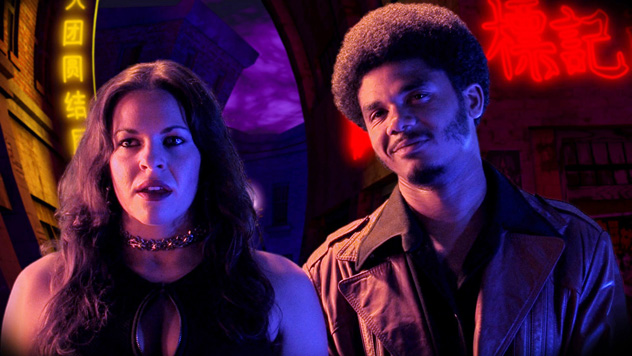