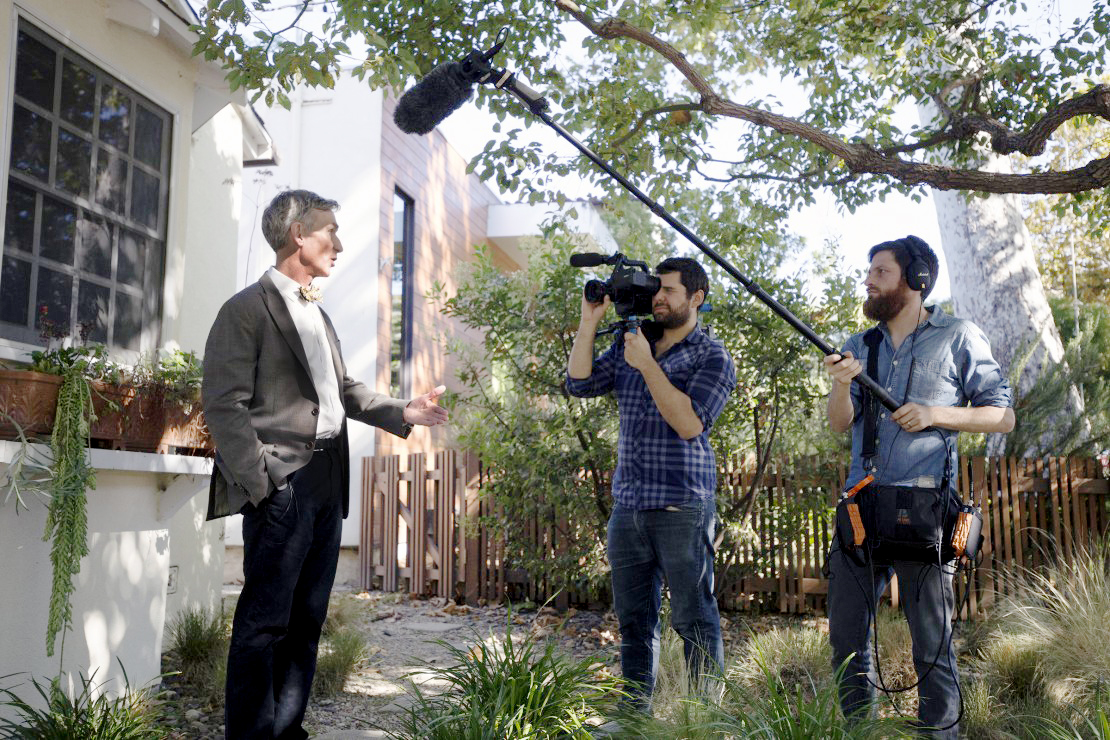 In a time of growing political instability the world over, the line between reality and doomsday Vaudeville has become increasingly blurred here at home. Scientific facts of life are one such blurred line, with things known by obvious physical laws of nature being both outwardly attacked and inwardly denied by those with a love of blind faith and willful misinformation. Be it evolution or climate change, we live in a time where mass avoidances of truths are perhaps more maddening than at any other time in human history, as science and technology continue to embolden our ability to tell fact from fiction. Maddening, that is, if you’re on the side of science, logic and reason.

If not, prepare to be forever challenged by a man like Bill Nye. Yes, that Bill Nye—“the science guy.” He’s been in the business of public, educational truth-telling for nigh 25 years, and to this very day dukes it out with all comers, from Australian Christian fundamentalist and Creation Museum founder Ken Ham, to Fox News meteorologist and climate change denier Joe Bastardi. Nye’s grit in the face of such staunch pig-headedness has earned him both respect and hatred, depending upon which side of the aisle you stand. Which in part led filmmakers David Alvarado and Jason Sussberg (The Immortalists) to the task of documenting the man himself.

Bill Nye: Science Guy follows the legendary science communicator for an entire year, chronicling the ups and downs of confronting the ugly side of scientific denial from Kentucky to Greenland. Along the way, a portrait is painted of an actual individual and not just a television personality. The result is an accessible, thought-provoking and often cringe-worthy documentary that can fill you with both hope and dread. Submerge caught up with Alvarado and Sussberg in anticipation of the film’s screening at the 17th Annual Nevada City Film Festival. 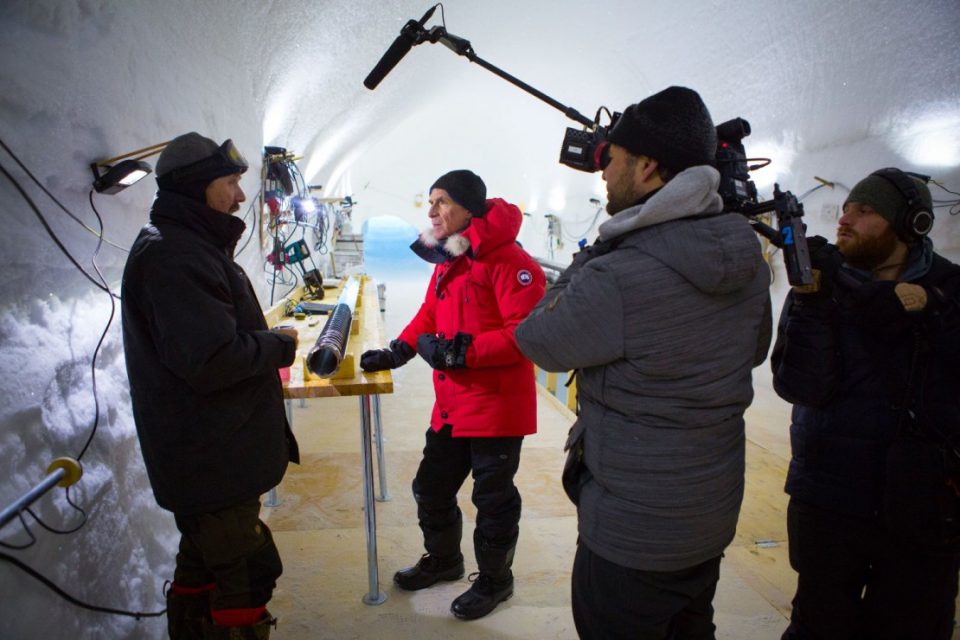 I’m guessing you didn’t expect Donald Trump to be the next president when you began this undertaking in 2014. Did you imagine the battle for science and reason would become as intense as it has?
Jason Sussberg: Not at all. There’s a whole different version of the film where Donald Trump wasn’t even a part of it; where this fight for science, fight for facts, fight for reason, was sort of a fringe oddity. When we were [making] the film, and just anecdotally we would share this with our friends or other filmmakers, their response was a uniform, “Who cares, why bother, why whack this hornet’s nest?” And not to say, “I told you so,” but David and I were aware that there were dark forces lurking on the surface of our politics.
David Alvarado: If you live in New York or San Francisco and L.A., it’s easy to forget how many people have those very strange worldviews. How many people in the American electorate believe the earth is less than 10,000 years old or that evolution didn’t happen? It’s something like over a third of the voting electorate doesn’t understand the most basic parts of science, and it’s easy to forget that in our bubbles on the coasts. I grew up in Dallas, and that was everybody around me. And when I moved to California for graduate school, I was shocked that people didn’t perceive the threat that people are this backwards. It kind of just came to a head when we were in production, and it was a reminder of why we set out to do it in the first place.

It’s an engaging film to watch on many levels, from the personal touches in Bill’s life to the various political and scientific debates. But I gotta admit that as much as I enjoyed it, at the film’s conclusion, I kinda felt helplessly depressed, which seems par for the course with many thinking critically about climate change.
DA: [Laughs.] I think it is kind of depressing. The whole conflict with Joe Bastardi and Ken Ham felt like you’re banging your head against the wall, and I think that’s sort of where we’re at right now. I think we have to find a solution to that, and the film doesn’t really pretend to offer any answers. But one takeaway is that education is key. The next generation of educators are the long-term solution. As much as we need to be literate in the sense of being able to read, I think you have to be scientifically literate. That should be something we take with extreme seriousness. We hope that was the message. There’s a chance to reverse this, but it’s going to be a long process.

What kind of personal relationship did you develop with Bill over the course of the film?
DA: He sort of became our friend. There was the critical distance we had to maintain, because we had creative control over the film and wanted to be honest about what we discovered about the man. But we truly do like him as a person. He’s an amazing guy and his heart’s in the right place. He’s not perfect, just like nobody’s perfect, and we explored those avenues in the film. Through that process there was a trusting relationship built between us, and I’m really glad he let us into his life.

Did he enjoy the final product?
DA: At SXSW, where the film premiered, I think he just needed to take it all in. It’s hard to look at your life on a 50-foot screen with an audience of a thousand people. He seems to love the film more and more as he travels with it and hears people’s response. He always liked it, [but] I think he’s grown in appreciation for what the film does and what we crafted.

As filmmakers, what was toughest for you to take in on a human level?
DA: The Ark Encounter [at the Creation Museum] in particular, that’s sort of the environment I was raised in. My family aren’t believers in evolution; I remember going to Sunday school and learning those things and taking them as fact. [So] walking through the Ark, with all its horrors, was like walking through my childhood. They were literally telling kids that giants are real; like 40-foot tall giants were a thing that was actually roaming the earth. These are grown adults telling children lies.

Realistically, what’s your vision for the future? And how do you think climate change will continue to unfold?
JS: Not to sound Pollyanna-ish, but I think that technology is going to be the thing that helps us get out of this, not politics alone. We might never agree on how to solve climate change, [but] right now we can’t even agree that it’s happening. We are so screwed in our politics. Technology won’t deliver us from our current situation, but I think that there are solutions out there— renewable energy, carbon trapping, geo-engineering—that are kind of post-politics that we’re gonna have to use. Democracy is a very slow process. Politics is slow. Technology is not. It’s only a matter of time before we’re using batteries to energize our houses, and using solar panels to gather that energy … there are solutions out there.

Bill Nye: Science Guy is part of a fantastic slate of films—shorts, documentaries, animation and fiction—set to screen at this year’s Nevada City Film Festival, which runs from Sept. 8–15. Bill Nye: Science Guy will be shown on Sept. 11, 2017, at 5:30 at The Miners Foundry Cultural Center (325 Spring St., Nevada City). Filmmakers Jason Sussberg and David Alvarado, as well as the man himself, Bill Nye, will be on hand for a special Q&A. To purchase tickets and for a full lineup of films, go to Nevadacityfilmfestival.com.