The Sands of Time

I’ve seen a lot of movies. Once, in the wee hours of a weeknight, I spent a solid hour watching The Coca-Cola Kid, starring Eric Roberts as “a whiz-kid troubleshooter in a remote Australian region where a local eccentric is the soft-drink king.” But I can honestly say I’ve never seen anything quite like Richard Linklater’s Boyhood.

Wow, that’s a bold statement (I say to myself). Though as far as I can recall, I really never have seen a fictional film chronicle the fictional life of an actual child through the actual lens of time. Which is what Linklater has created by creating the lives of Mason and Samantha Evans.

And yet on the surface I’m both over- and underwhelmed. Does that mean I’m too real? Or that Linklater (of Slacker fame) is less than authentic? I’m not really sure. The reality is that Boyhood was filmed over a period of 12 years between the lead actor (Ellar Coltrane) and actress (Lorelei Linklater) aging from 5 to 18. It’s like some sort of Truman Show being played out before your very eyes, only they’re in on it. Coltrane, whom the focus is squarely upon, leads the life of any average Texan boy between 2002 and 2013; along the way he endures the confusion of changing schools, the terrors of an alcoholic step-father, the joys of smokeouts and makeouts. He is surrounded by family: A strong single mother (the ever-radiant Patricia Arquette) with a broken man-picker, and a once-hapless pop turned responsible second-chance dad (Ethan Hawke).

Life’s intimate and formative moments are played up throughout Boyhood, most of which are identifiable. From your first look at a nudey magazine to the constant insecurity of high school dating, Linklater finds a way to show the audience slices of life that beg the utterance of, “Oh God, I remember that.” 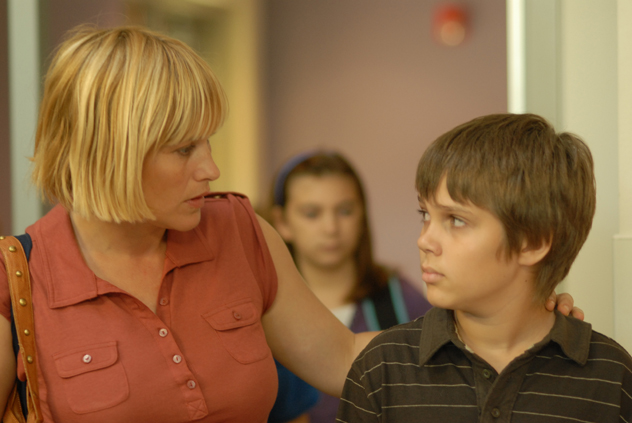 At times, his portrayal of child- and young adulthood almost feels hammy; you can’t be sure if this is how it really felt, or if you’re instead watching a semi-familiar life story shown through the rose-colored glasses of The Wonder Years. At which point you ask yourself whether Linklater has truly achieved something bold and original, or rather re-chartered territory that would be otherwise redundant if not for Mason Jr. and Samantha’s natural progression in age, because the internal and external voice of the film is one of sentimentality. The aim is to project experiences that we’ve all had while stimulating our minds with the realness of time; and in all fairness, Boyhood most certainly achieves that much.

But at the same time, this movie is two hours and 45 minutes long. There comes a point where the minutia of Mason’s late teens are somewhat superfluous, not to mention Coltrane’s seeming regression as an actor as he grows older. Or was it just that I didn’t particularly care for the teenager he became? That’s always a legitimate question: Was this character poorly acted, or was it simply portrayed too well as a person I didn’t really like? Which isn’t to say that 17-year-old Mason Jr. is lamentable, but rather that I prefer his defiant 10-year-old self to the I’m-so-misunderstood teen he eventually becomes.

In some ways it isn’t altogether fair to focus solely on Mason Jr.—Patricia Arquette really does stand out with brilliant performance. Aside from still possessing a beauty that literally jumps out of the screen (be it scenes shot in ‘02 or ‘13), she’s got all the chops and more to showcase a loving, yet flawed mother perpetually struggling with the challenges of single motherhood. In some ways, Arquette is the star of the film, as the characters of both Coltrane and Lorelei are entirely centered around their interaction with mama bear. And moreover, her effectiveness as an actress is in no way whatsoever based upon her 12 years of aging—she’s just that good. I wouldn’t be the least bit surprised to see Arquette nominated for an Academy Award come Oscar season.

Despite my various misgivings and overly sentimental quandaries, Boyhood on the whole is a smash. Where it oversteps in duration, it resoundingly succeeds in general soul, even when staggering within the limitations of sap. This is a film you’ll be reminded of in the months ahead, and, perhaps for Linklater, his best chance at long-overdue national recognition.