Hey, It’s Captain America, or Whatever

Thursday night’s premier of Captain America: The Winter Soldier started out as something of a learning experience for yours truly. Opening the doors to the ticket lobby, I observed the surroundings and asked myself the following: “Why are there teenagers dressed up like superheroes? Why are there teenagers lining up two hours early for the midnight screening? And why are there only 25 seats left for the 10 PM?” Hey, I’m not naïve to the popularity, and I’ve seen many, many comic flicks over the last decade-plus. But I rent them. I watch HBO. I haven’t seen one in the theater since that first rancid Spider-Man came out, and it’s safe to say the experience has changed a bit. The only two-seat pairings available in the entire theater were in the very front row, in which I lasted one preview before abandoning ship for a single. “Don’t worry about it,” said my friend. “It’ll be like that episode of Coach…”

And here come the opening credits to hoots, hollers and applause. Why, it’s Chris Evans, the hunky hunk playing Steve Rogers cum Captain America. He looks good in that tight Under Armour shirt, running alongside Anthony Mackie, who’s welcomed into the Marvel film lexicon as Falcon. Then the sun shines, light humor is exchanged, and the audience bursts into guffaw. Anyway, unfrozen and still adjusting to modern society, Captain America is now a full-time agent of S.H.I.E.L.D., working closely with higher-ups Nick Fury (Samuel L. Jackson) and Alexander Pierce (Robert Redford). His super-female counterpart, fellow Avenger Black Widow (Scarlett Johansson), is rough-and-ready: game for action, espionage and giving a piece of her mind. But when an attempt is made on the life of Nick Fury by a silver-armed armed assassin known as the Winter Soldier, nothing is as it seems. S.H.I.E.L.D. is suddenly turned upside-down, finding Cap, Black Widow and the gang square in the crosshairs of a global HYDRA conspiracy. HYDRA’s mission? Launching a super-weapon set to eliminate 20 million undesirables around the world. It’s now up to the Captain and his crew to regain control before hope is lost… 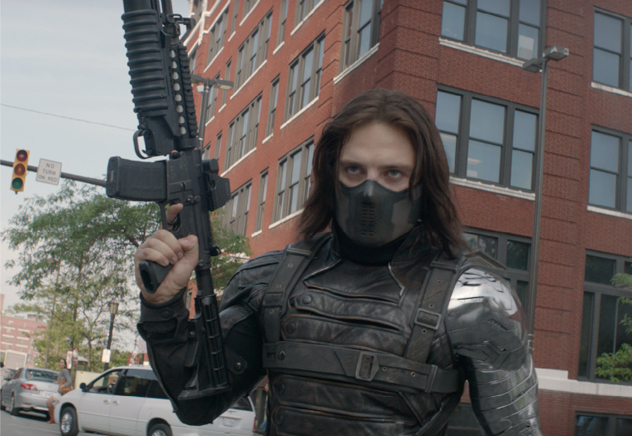 There’s a lot of moving parts to all that, though; cross-referencing threads from the first film (as well as The Avengers), character crossovers, deep wells of deception and suspicion, foreshadowing future installments…and none of it is interesting. Not even remotely. Tantamount to this intricate dullness would be the Winter Solider himself, for which the movie is given its namesake. Played by Sebastian Stan, the Winter Soldier reprises the character of Bucky Barnes, Steve Rogers’ army buddy from his time as a pre-Captain America pip squeak in the 1940s. Only now he’s a cryogenically revitalized killing machine, some sort of Nazi-Soviet-HYDRA experiment, not unlike the Captain himself. And yet the Winter Soldier is a feckless paperweight, arbitrarily inserted into action sequences while mixed up in a script that doesn’t seem to have any interest in his existence in the first place. And how’s this for a further summation: Chris Evans borderline stinks. Sam Jackson is inconsequential. Scarlett Johansson gets by on skill and beauty alone. Not even the action is worth a goddamn beyond basic technical merit.

Am I simply missing the hook on the continued success/barrage of Marvel-made movies? This fucking thing was 136 minutes of absolute filler. I’d like to say it’s because I grew up collecting Marvel and DC comics through the ‘80s and ‘90s, saving my money to buy collectibles from the ‘50s, ‘60s and ‘70s, that my standards for what these movies ought to be is just set too rigidly against the paperbacks themselves. But that’s not the case. I really like the Christopher Nolan Batman series. I genuinely dig a couple of the X-Men flicks. But this intertwined Avengers franchise, like so many other Marvel blockbusters of recent years, is weak-ass cheese. It’s Michael Bay bullshit filtered through the Marvel world. I don’t expect The Winter Soldier to be anything like Dolph Lundgren’s 89 in ‘89 Punisher, but 136 minutes? Really? Would the kids stop dressing up without Captain America’s Bill Pullman-esque speech to the S.H.I.E.L.D. masses? Would the dollar signs plummet if we turned the one-line-zinger knob down from 11? Would anyone get up and walk out of the theater without Garry Shandling’s second cameo as a taxidermied blowfish? Christ. I’m not gonna sit here and tell you Winter Soldier is as bad as Batman & Robin, but I’d much rather be entertained by relentless stupidity than bored out of my skull by cinematic Styrofoam.