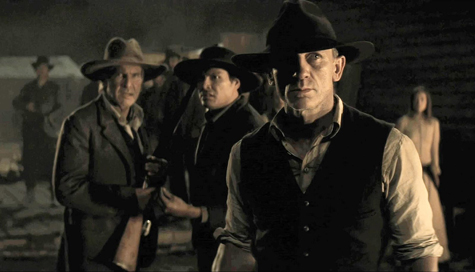 There is some truth in advertising. Cowboys and Aliens offers exactly what its title suggests. There are plenty of cowboys and aliens (more of the former than the latter–cowboy hats are cheaper than elaborate CGI sequences). Even cowboys’ more traditional foils, the Indians, are thrown into the mix. If Cowboys and Aliens were to follow in the footsteps of other matter-of-factly titled films, such as Snakes on a Plane perhaps, at the very least, there would be campy good times to be had. Instead, Jon Favreau’s latest action epic seems completely unaware of how ridiculous its premise is, and in this case ignorance is not bliss.

The film opens with Daniel Craig doing what he does best: kicking ass and taking names as a mysterious dark horse-type character. He wakes up in the middle of the desert with a strange metal bracelet fixed to his left wrist. He doesn’t know who he is or how he got there. A group of stock ne’er-do-wells surround him, and he swiftly dispatches them, even knocking one dude off his horse with a flying tackle. It was pretty sweet. We all eventually find out that Craig plays Jake Lonergan, a sort of Robin Hood-type bandit… well, maybe not as altruistic as the rogue of Sherwood Forest, but definitely not a jerk-type bandit either. He’s wanted for stealing some gold from Woodrow Dolarhyde (Harrison Ford). Lonergan is incarcerated after an altercation with Dolarhyde’s worthless son Percy (Paul Dano) and is about to be shipped off to the federal marshal, but he avoids earthly prosecution–and Woodrow’s thirst for good ol’ fashioned lynch mob-style retribution–when aliens swoop in and raze the tiny Old West town and royally fuck up everyone’s shit. Because this is Cowboys and Aliens, not Cops and Robbers.

From there, Lonergan, Dolarhyde and an assortment of cardboard supporting characters tromp across miles of dusty, desert terrain on horseback so they may rescue their friends and loved ones and combat the superior technology of the alien horde. Sam Rockwell plays a barkeep named Doc, a man who saw his wife wrangled by an alien space ship and has never even fired a gun before; and Olivia Wilde plays Ella Swenson, a mysterious and beautiful woman who seems to know a lot more about all this alien business than she lets on.

It would seem like the perfect formula for a brainless but enjoyable romp, but Cowboys and Aliens is sorely lacking in the romp department. Mostly, it’s a bunch of panoramic shots of horseback riding (so much horseback riding) and people who’ve seen crazy shit in their lifetimes imparting gruff, no-nonsense words of advice to those who have yet to experience things like war or alien invasions–words of wisdom about keeping your gun close and what it means to be a man.

Unfortunately, this isn’t True Grit, not by a long shot. As far as explosions go, there are plenty, but other than a sequence where a still amnesiac Lonergan and company encounter the bandit’s old crew, there is never much in the way of fun. Cowboys and Aliens feels too heavy and dour. It never gives much of a wink or a nod to the audience to tell us we should just lighten up and enjoy the ride (via horseback, of course). This is quite a surprise with Favreau at the helm, though it may not be entirely his fault. Five people are given screenwriting credits (including Lost’s Damon Lindelof). Perhaps it’s a case of too many cooks. In any case, as director of the first two films of the Iron Man franchise, Favreau took a slightly less well-known comic book character (at least compared to your Spider-Mans or Batmans) and turned him into a household name. Whereas those films melded action and humor to appeal to even those who don’t proclaim to be comic book fans, Cowboys and Indians presents a stone face as if its mere insistence that this bullshit must be taken seriously will make it so. Word of advice: It didn’t.