Just When I Think You Couldn’t Possibly Be Any Dumber

Dumb and Dumber To

Leaving the theater Thursday night in a mystified stupor, I had the inkling to drive straight home and go full blown Kerouac on this review, a one-paragraph stream of consciousness devoid of any and all punctuation—just a flurry of frantic observations attempting to explain how something could be so positively putrid even with expectations coming in at a palpable low. But let’s start with some facts.

Fact 1: The Farrelly Brothers haven’t made a decent movie in 14 years.

Fact 2: The Farrelly Brothers have recently peaked in heinousness, their penultimate release being the loathsome Three Stooges.

Fact 3: The first Dumb and Dumber came out 20 years ago, leaving the statute of limitations for releasing a sequel well surpassed.

But of course there is no such statute of limitations. This is Thunderdome, this is ‘Nam, there are no rules. Hence Dumb and Dumber To.

I’m not sure whether my being a loyal fan of the original made me more or less likely to hate this movie. I view Jim Carrey and Jeff Daniel’s 1994 performances as classic; masterful slapstick comedy from lovable idiots, seemingly timeless in nature. I’d go as far as to say that Dumb and Dumber is one of the best comedies of its era, while still relevant to a younger generation of kids. (I learned the latter assertion firsthand while subbing high school during the final week of class, when every period becomes a 45-minute film festival.) Of course the new installment would be incapable of meeting my, or anyone else’s, reverence for the first—especially considering that nobody in the last decade was clamoring for a sequel to begin with—but does that mean it had to be completely rotten? No! And yet, it is.

The basic gist is that 20 years after the misadventure with Mary Swanson, Lloyd (Carrey) is catatonically confined to a wheelchair at a mental care facility, having never recovered from the heartbreak of losing his one true love. Harry (Daniels), devoted friend that he is, still continues to visit Lloyd once a week, and one day announces that he is dying of kidney failure. Lloyd then reveals he’s been faking the entire time, quickly reuniting the pair to track down Harry’s long-lost daughter in the hopes of a familial kidney transplant. 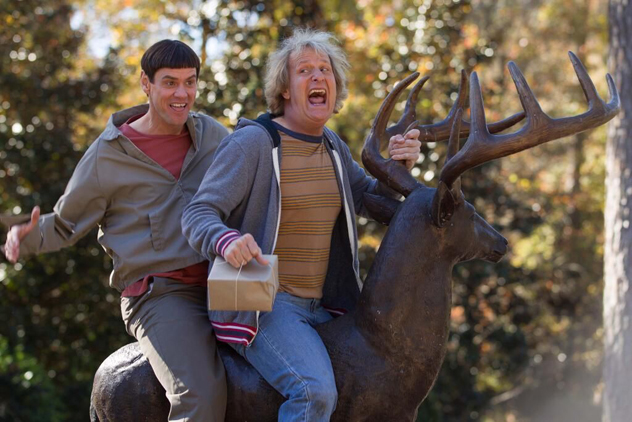 But who really cares about the plot in a movie like this? Just make us laugh. That’s all we ask! What becomes immediately apparent, however, is that this is not the same Lloyd Christmas and Harry Dunne of 1994. As you’ll sometimes notice on a show like Saturday Night Live when a former cast member comes back to host years later, they simply can’t recapture the mood or magic of characters they portrayed in the past. Chris Farley reprising Matt Foley, Dan Aykroyd reprising Irwin Mainway—pick one of a hundred examples. Such is most certainly the case for Carrey and Daniels, who force themselves into the once-familiar roles with the grace of G.G. Allin at a fecal matter peep show.

Blame the writing if you like, because it’s dreadful. Aside from the pathetic and constant recycling of every comedic morsel possible from the original, all the crude-but-cute humor that made the first film so endearing is thrown right out the window. Instead we’re just left with crude, and poorly executed at that. A “me love you longtime” bit mocking Asians? Sure! A menstruation gag replete with the stained white pants of a 12-year-old girl? Why not? Or maybe a fantasy in which Harry instructs Lloyd to “bone” his daughter “like a chicken cutlet.” Bring it on!

Really, I love dick and fart jokes as much as anyone. More than most, even. But Jesus Christ, gimme something to work with here. Tastelessness can be tasteful, but only when it’s actually funny! I mean is this a fucking Artie Lange production, or what? Essentially, if you were to stuff the Dumb and Dumber To synopsis inside a fortune cookie, the (mis)fortune would read something like this: Where Harry and Lloyd were once sweet, blissful morons, they are now obnoxious, perverted assholes.

And there isn’t much else to say. I truly hated this movie. One hour and 40 minutes of insufferable tripe, a complete and total embarrassment. I will always love the Farrelly Brothers for giving us three fabulous comedies over a four-year span of greatness, but they’re an absolute joke at this point, and not in the way they’d like. We’re talking Kevin Smith territory here. And nobody wants to be compared to Kevin Smith. Not even Kevin Smith.