Bible stories. You know you’ve been waiting for them. And guess what? They’re here, and some of them star Russell Crowe! Let me just reassure you that there’s nothing wrong with fantasizing about Dwayne Johnson as Goliath in the next James Cameron film. David vs. Goliath is a Bible story, right?

I don’t really remember. Like many, I went to Sunday school as a kid but was ultimately unaffected. I harbor no ill will toward Christianity, though no particular reverence either. I feel perfectly capable of looking at a movie like Exodus: Gods and Kings, and reviewing it without bias. Because when you get right down to it, the Bible is full of amazing stories (whether or not there’s any truth to them is a conversation for another time between people who actually care about such things). But at the very least, the Bible is a treasure trove of allegory and adventure, and it makes perfect sense that Hollywood would begin turning more and more of its tales into major motion pictures.

Exodus: Gods and Kings is the story of Moses. Driven out of Egypt by Pharaoh Ramses after the revelation of his Hebrew roots, Moses defies exile by leading 600,000 Hebrew slaves from their collective shackles under the guise of Almighty God. Christian Bale portrays the man of the hour, leading a relatively star-studded cast that includes Ben Kingsley, Joel Edgerton, John Turturro, Aaron Paul and of course (being that this is a Ridley Scott film) Sigourney Weaver. Seemingly all the necessary ingredients are at hand for a massive epic, and clocking in at 150 minutes, you’d have to believe that Scott felt the same. 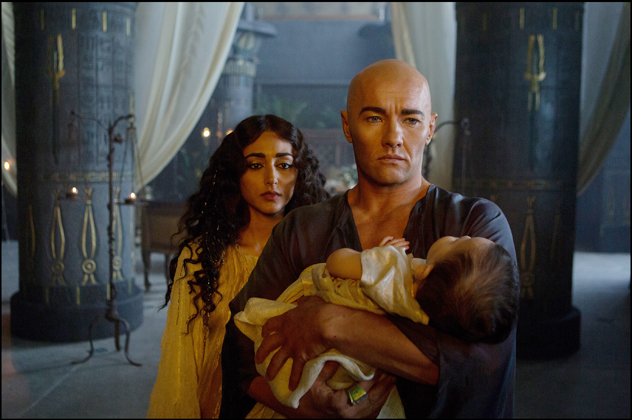 But, simply put, Exodus is boring. No. It’s a horse tranquilizer. Other words that might describe its aspect would be stale, milquetoast and overreaching. Let us now evaluate each word above and its applicable nature.

Boring: Good Lord does this film plod. Long stretches of uninteresting dialogue wrapped in a cloak of Biblical history has a way of wearing one down after a while. And by “a while” I mean about three minutes.

Stale: The acting is lifeless. Joel Edgerton’s portrayal of Pharaoh Ramses couldn’t possibly be less intriguing, and the same can pretty much be said for the lot of ‘em. (When John Turturro is flat-out invisible in a character role, you know there’s something wrong.) And you’d also think that recreating Egypt BCE would equal somewhat of a visual thrill, but again, you’d be wrong. It’s like Moses went to Modesto.

Milquetoast: Difficulty catching five winks in your busy schedule? Try the Exodus action sequences on for size. They’re so spineless, at one point I actually thought the poor soul next to me was taking a nap with his eyes open.

Overreaching: As someone who doesn’t know how many pages in the Bible are actually dedicated to the story of Moses, I can only reflect on what the film has to offer. And what it does offer is a setup far too grand for a payoff far too small. No Charlton Heston moment here. 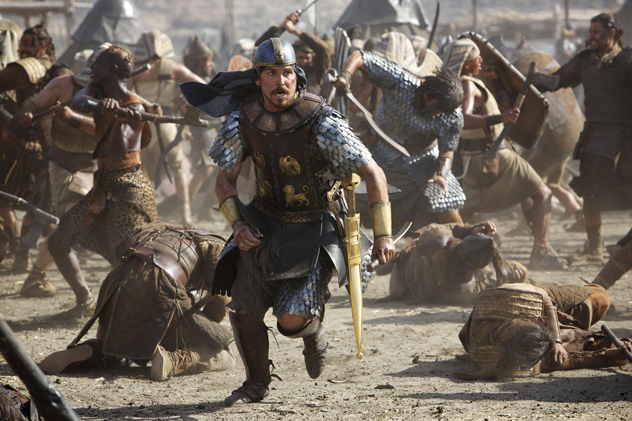 In other news, I’ve heard some criticism regarding the film’s casting and its general lack of Eastern faces. Moses certainly didn’t look anything like Christian Bale, that’s for sure. But this is par for the course, and follows a long-standing tradition of cinematic opuses that reads like the 11th Commandment: “When in doubt, cast white people and give them British accents.” You’re also sure to hear critiques on the film’s historical accuracy, which to me is laughable, as it is in all likelihood a made-up story in the first place. Though I suppose if you really do believe the Bible word for word, you’ll find something legitimate to take umbrage with, just as I do with, say, The Rum Diary.

I feel comfortable saying that there are worse movies than Exodus: Gods and Kings. It’s not repellent, it’s just not any damn good. I kept thinking how much it reminded me of Kingdom of Heaven, which I later realized is also directed by Ridley Scott. It’s possible that if you’re a practicing Christian, you’ll find a smattering of interest here. But religion should not mask the fact that this is just a dull, forgettable film.