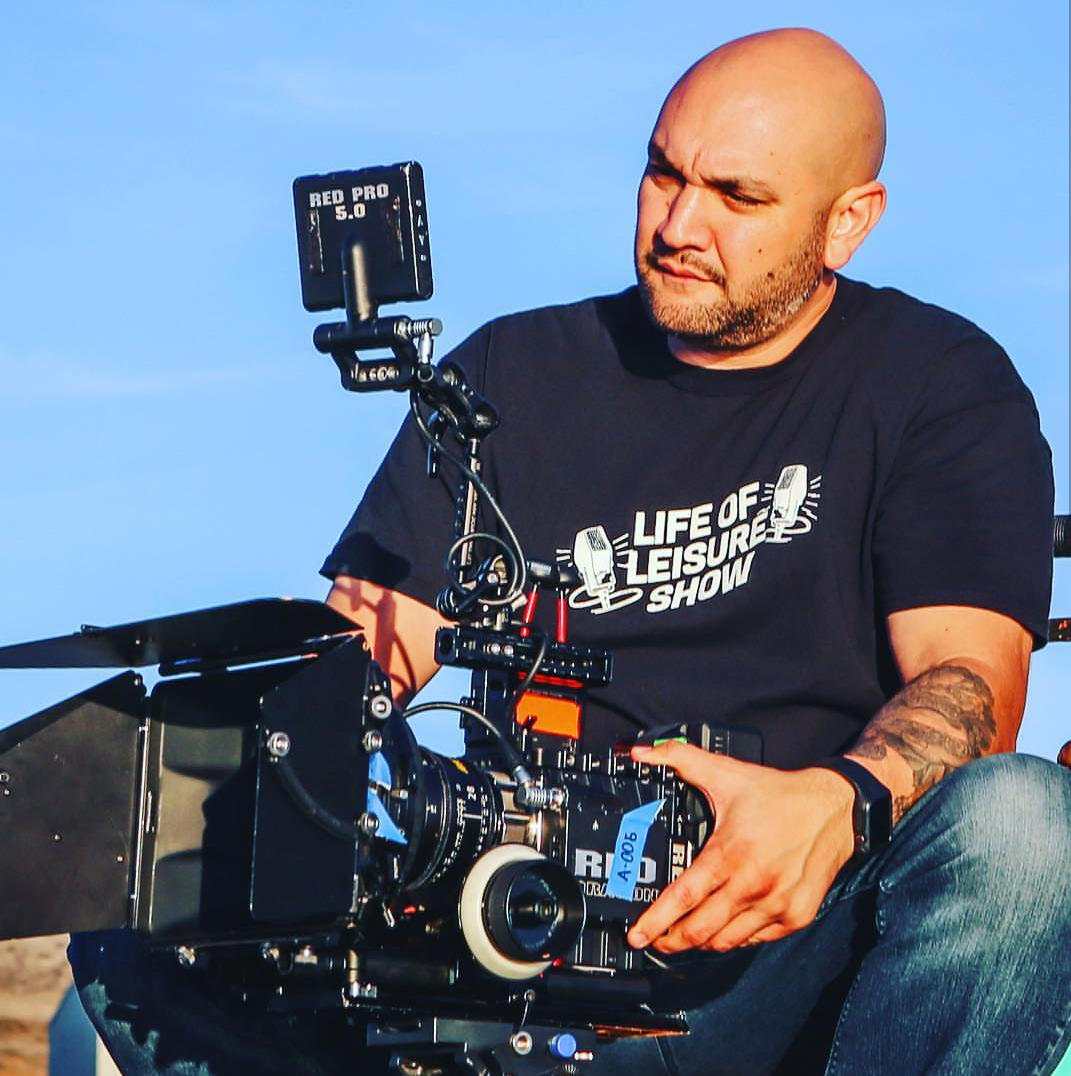 Sacramento native Nick Leisure’s lastest film, A Clear Shot, tells the tale of one of the scariest days in recent Sacramento history: the April 4, 1991 hostage crisis that took place in a South Sacramento Good Guys! electronics store and resulted in the deaths of three hostages and three gunmen. Leisure’s depiction is a chillingly close-to-life version of the events, imbued with race and class politics that make it appropriate for a Trump-era audience.

The film toggles between the points-of-view of the hostages, the store employees, the police and the first-generation Vietnamese gunmen, whose frustrations with systematic oppression and poverty led them to gang violence, and eventually the botched electronics store robbery. Leisure crafts a story that, delicate as it may be, solicits compassion for each set of circumstances. If the 1990s was the era of the hero/villain binary, Leisure’s is a film in which there are no detestable characters and no clear heroes either—and yet, contrary to what they teach you in film school, the nuance makes for an incredibly compelling story, in which the memories of all of these people—all of whom could, in one way or another, be considered victims—is represented graciously.

Leisure is a sort of renaissance man, having worked in the record industry, advertising and film production as a writer, producer, cinematographer and director. A Clear Shot, which is his seventh feature, stars Mario Van Peebles, Mandela Van Peebles, Jessica Meza and Sandra Gutierrez, and will be on streaming platforms soon.
I sat down with the prolific director to talk about the film, local politics, working in Mexico and his many other projects in the works. 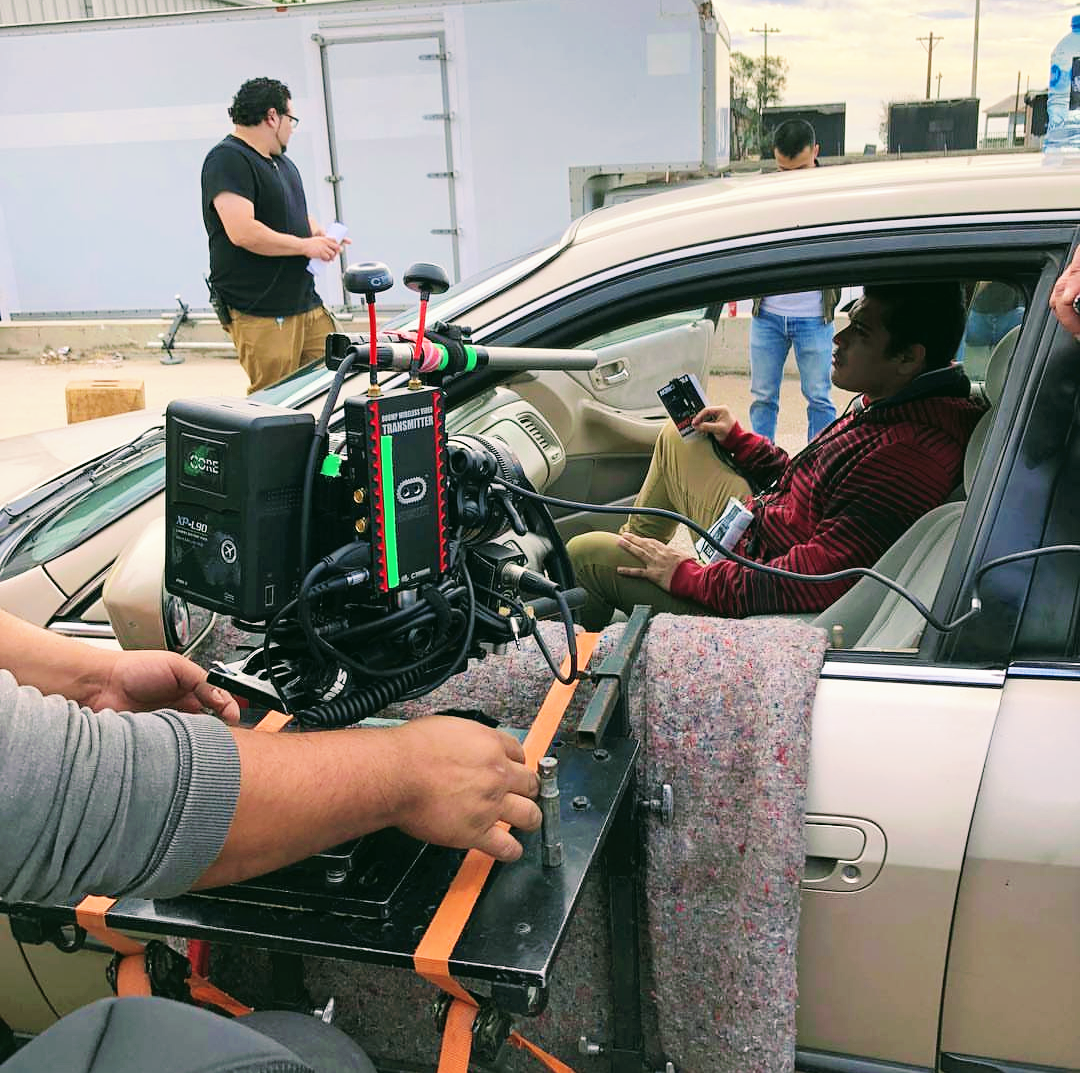 How’d you get started?
I started in the music business at a really young age. My mentor was an American producer who got me in the music business at 17 years old, so I kind of got inspired by being around a lot of big artists such as Mariah Carey, Usher and all that. I worked my way in music at first doing whatever I could, trying to be a sound engineer, and then after a couple of years I got tired of sitting in the studio all the time waiting on the artists so I wanted to get into acting. I didn’t want to be that struggling actor in Hollywood, but I had already made so many contacts in the music business, so I picked up a camera and started shooting, went on tour with old school bands, met different rappers and started doing a lot of music videos.

Was this on the production side of things?
I was creating, writing the treatments and I was shooting. I was also the DP [director of photography] and directing projects. I worked my way around, probably tried every position in production, and I started directing a lot of music videos for major artists. That turned me on to commercials, and I took a gig as a creative director at ABC, did hundreds of commercials for them. I got clients out of that, worked with a lot of stars and players, and then when Jason Thompson got traded to the Warriors from Sacramento, I started shooting over there and working with a lot of ballplayers. I did a lot of short films over the years and then feature films.

Was the whole film shot in Mexico?
This studio in Rosarito called Fox Baja studios was built by James Cameron for Titanic and they still do a lot of productions there like The Walking Dead and the Selena series. One of my producers who works and lives in Los Angeles was going to produce this movie here in Sacramento with me, but there was so much red tape. We got to the point where it was too troublesome for us to do it here, so we were thinking about doing it in San Francisco or Los Angeles, and numerous productions are already in Baja so I had to come to Mexico and shoot in Mexico. It’s way cheaper. I didn’t think I was going to shoot in Mexico. I went out to Mexico and ended up loving it.

It’s amazing because after watching the film, I heard that it was shot in Mexico and I really couldn’t believe it. It feels so much like Sacramento in the ‘90s.
That’s the art department. If you went into their office there, they had pictures all over the walls—the store, the police cars, the uniforms, etc. They recreated exactly what they saw on the internet and they did their best. 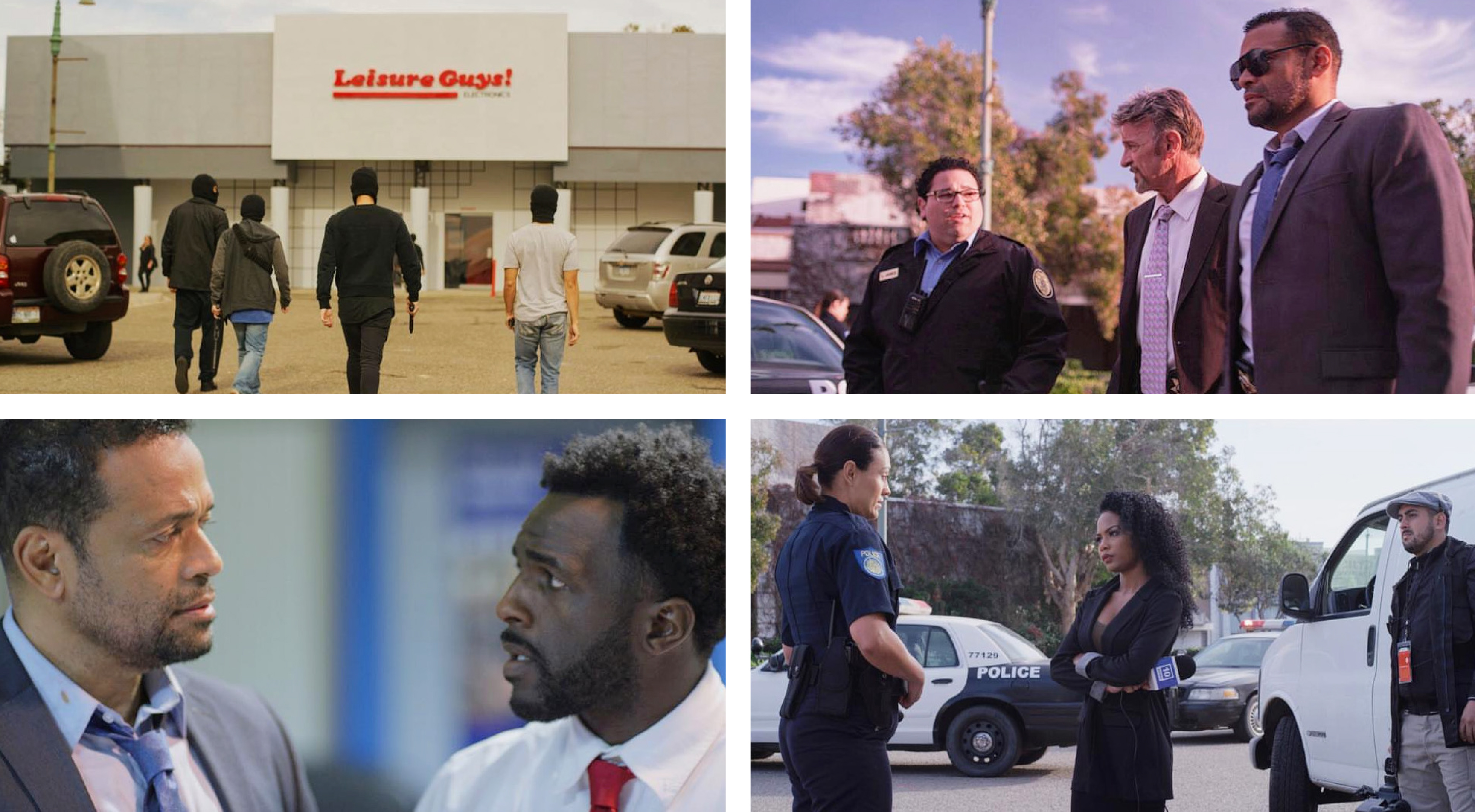 How important to you was it to make this about this particular situation and not a sort of an allegory that takes place in some other store and some other city?
It was really important in the beginning for me to get the details right, but we went through a lot of stuff for about three years, legally trying to figure out if you could use the name, and we knew that it was going to be a little bit of backlash from people who wanted some money. So we decided to make it “inspired by.” Every story we do in Hollywood is generally inspired by something in life, whether it is a story or a horror movie or anything [like] that.

When watching it, it seems really appropriate for 2019. If you watch it through the lens of systematic oppression, and what the president is saying on Twitter or whatever, it feels really contemporary. Was that intentional on your part?
When we write, we write what we feel, so it’s a lot about what we’re experiencing at the moment. I think it’s very relevant right now, because we’re dealing with a president that we have right now and that scenario with these four gunmen. At that time, they felt the same type of pressure that a lot of people are going through right now.

There is a lot of talk about race in the film. It’s really imbued with people being disadvantaged and poor. Why did you include that?
It was part of the true story, and I think it goes along with the mentality, like what people are feeling and thinking, especially with the president we have now. We have certain people who believe in this president—very few but they usually are the people that don’t have to worry about the financials. They are the ones that are benefiting. But the people who are struggling and want some kind of change, they’re not doing anything for them. I think the film touches on that as well, and the struggles that immigrants have to deal with right now, especially Mexicans. That’s one reason I love shooting in Mexico, because you can see the news and media all over here and how much we’re going to spend on a wall and I go, “There is nobody climbing that wall.” I crossed that border every two or three weeks, and I have a house in Rosarito, too, so I go back and forth, and I can tell you out of hundreds of people that I have worked with in Mexico, none of them want to come here. They look at us like we are crazy. They are like, “Your president is an idiot, we don’t want to go over there.” Media has a way of twisting things and make people think a certain way and, unfortunately, that’s not the truth over there.

Take me through your personal experience of the Good Guys! shooting. You said that you watched it on TV?
Yeah, I was In junior high school at that time and I had a friend who lived over there near Florin Mall and that’s where we used to hang out, so we saw it on the news. That was the only electronics store, so we knew where it was. So we decided as teenagers to go out there and see what we could see, and that was all locked up and there were the news crews everywhere. You really couldn’t see much other than the cops. We hung out there for a couple of hours just kind of being nosy teenagers. But because of the story and how it played on the news every year and in the specials, it kind of stuck in my mind. It’s one of many stories that were actually on the shelf for me that I wanted to do as a feature film. There are a few other stories like that that I’m looking at right now. 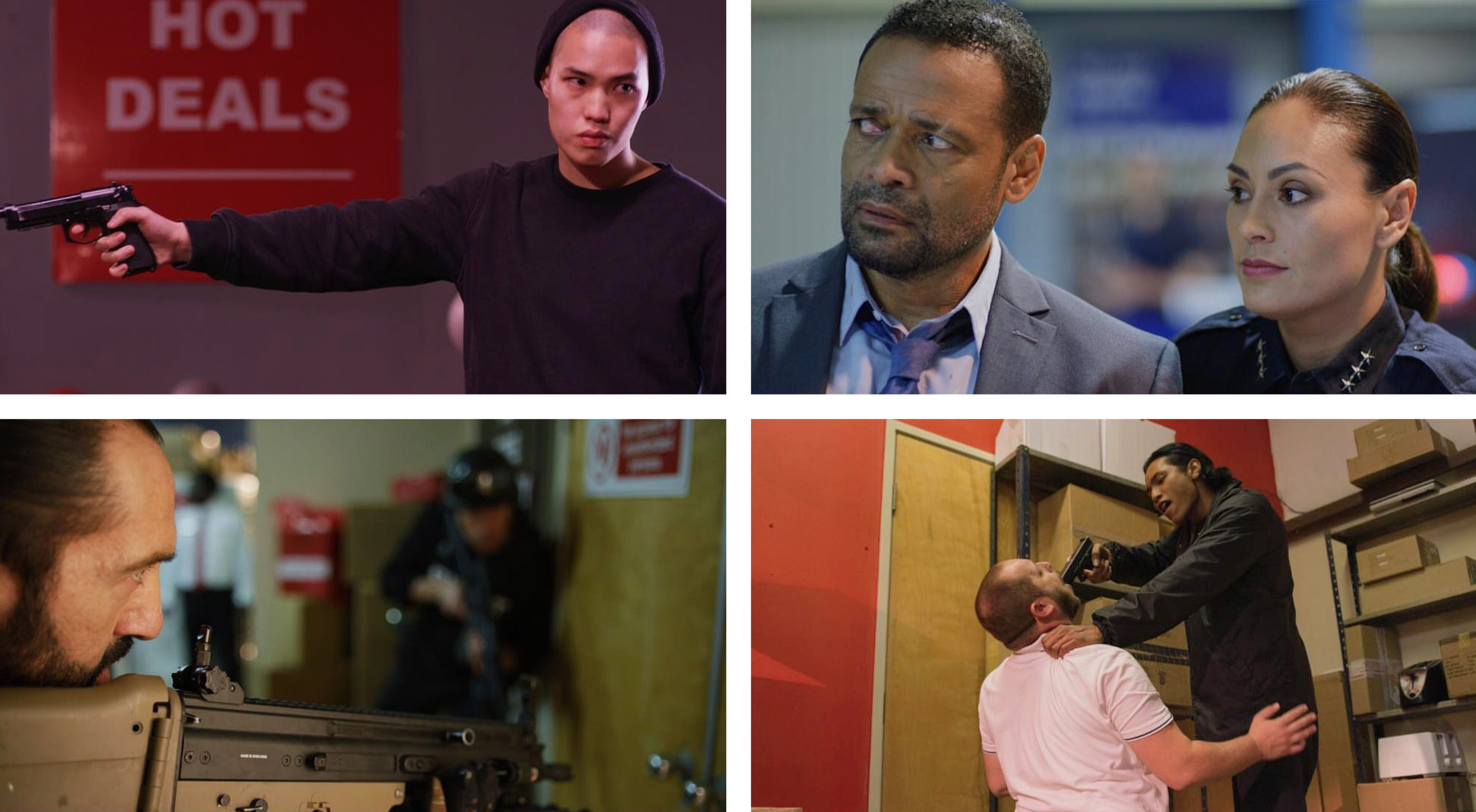 Tell me about what’s next for you. What are you working on now?
I produced a film right after this one. We were going to shoot in Sacramento, but we took it to Baja Mexico as well. That one wrapped in March, and now we’re in pre-production for the third film this year. I was trying to knock out five films this year, but it’s going to be four maybe. The third one is kind of loosely based on a true story that happened in Sacramento and San Diego and Mexico.

Do you think Sacramento should be involved in more film productions?
Sacramento could be a phenomenal place for movie productions and can generate a lot of revenue. You have to think that with this third film, we will have brought about $2 million to Baja Mexico that could have been here in Sacramento. So a lot of revenue with hotels, catering, jobs for people that could create an industry here. And I think Sacramento is getting closer to it, especially with the whole art movement that’s going on right now and the art street markets and the murals and all that type of stuff. It’s going to take sitting down with the mayor and figuring out what real filmmakers need to create films and keep them here. I went through the same stuff that Greta Gerwig went through when she was here. A lot of people were saying Lady Bird was shot in Sacramento but very little of it was shot here. We need to follow the model of Los Angeles. Los Angeles has two NBA teams, two football teams, and there’s a reason for that. Obviously, they don’t have a problem with revenue. You have to look at the things they’re doing. We have to start dealing with the times here in Sacramento. I know it’s very political, most people that I talked to over the years here are still in that belief that real estate is the best investment, but you’ve got to kind of branch out a little bit, especially if you want to do something different that is going to create history.

Do you envision yourself one day shooting something entirely in Sacramento?
I would love to shoot here. I could go home to my family after work. I love Mexico, too, but at the same time, this is my hometown and I would love to shoot on some of these streets. I grew up downtown before I went to junior high school and moved out to South Sacramento. Growing up downtown, running out in the streets, playing in the capital when I was a kid, I would love to be able to shoot a feature on the same streets that I grew up on. I think that Sacramento wants it and definitely, the last two weeks have been crazy with press. We have done every news station and radio. It’s going through a lot of changes so far, so hopefully the continued work out there would get to spark somebody to make a change. You would think that after the success of Lady Bird and being given awards that the city would go, “Hey, maybe we should do something.”

To check out a trailer for A Clear Shot, and for more information, go to Leisurefilms.com.