Hunky Dory: Pixar Can Do No Wrong, Everybody | Finding Dory 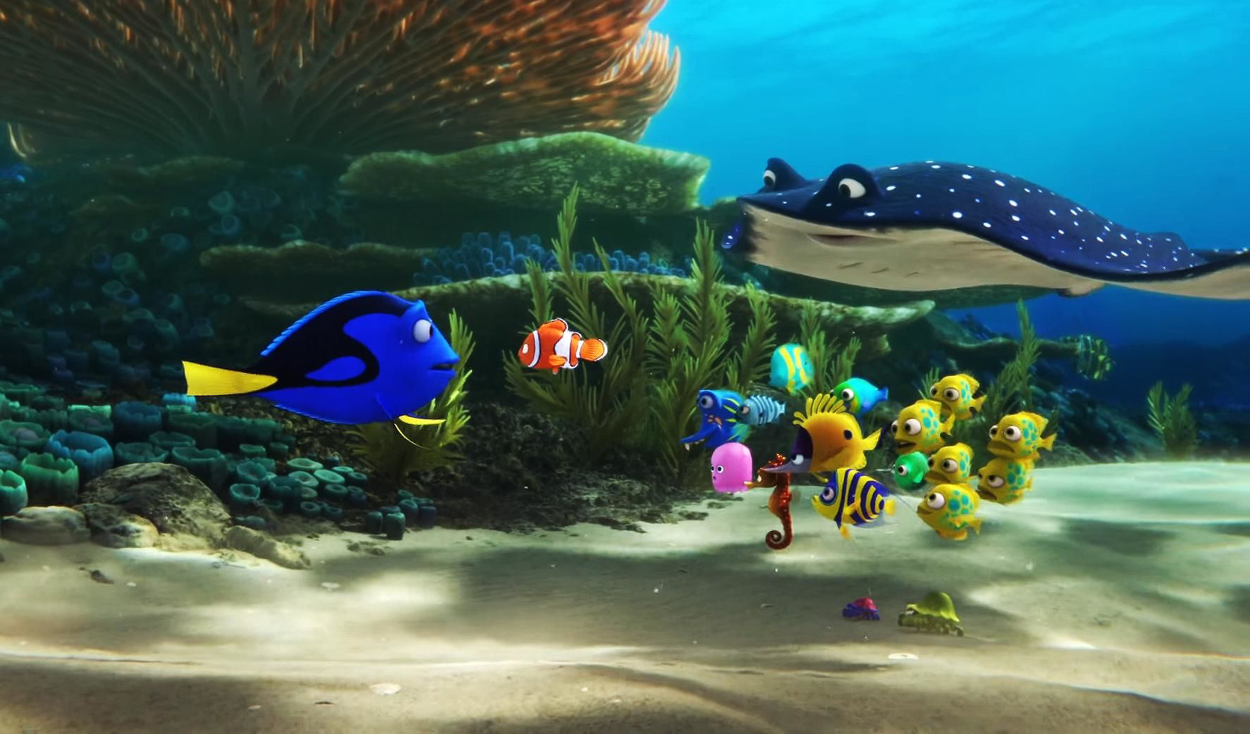 You are not alone in feeling like it’s been an extremely long time since Disney Pixar’s Finding Nemo first splashed into theaters, creating a cultural phenomenon and launching a worldwide run to pet stores to scoop up clown fish. Thirteen years have passed since little Nemo was swept out to deep ocean, with his worrywart father Marlin (Albert Brooks) desperately, often trepidatiously, accepting the assistance of a whole host of ocean-dwelling species to be reunited with his adorable fish spawn. And 13 years is a long time, but Finding Dory is a legitimate sequel, not some half-assed offshoot with a cheap budget, B-list voiceovers and a straight-to-Bluray release.

This is Disney. They do not fuck around. And they do not say words like “fuck.” Instead, bumbling octopuses exclaim youngster expletives like “holy carp!” and you fall in love with the idea of being a kid all over again. 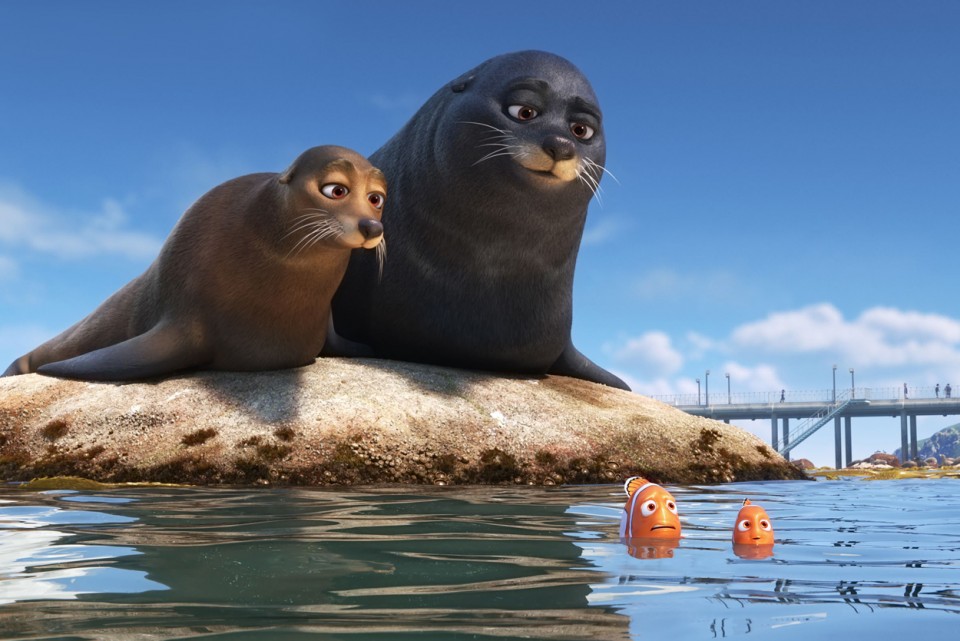 To that end, Finding Dory settles in on the hapless meanderings of one of the original film’s most-loved characters, voiced by the indelible Ellen Degeneres. One year after the rescue of Nemo, Dory is as forgetful as ever, sticking to a regimen of perpetual confusion—the result of her dissociative fugue—in the tranquility of the Great Barrier Reef. Her chance encounter with Marlin in the first film leaves a lot of questions for those compassionate souls wondering where Dory might have been going or what she was doing before, if she never remembers anything. Throw in some flashbacks to fish-baby childhood and voila! You have a plot.

Dory’s short-term memory loss is a crucial fulcrum, as you’d expect, as she mostly aimlessly attempts to track down the parents she wandered off from in an unknown part of the ocean and forgot about several years prior. The thrust of incremental memory recovery is a familiar vehicle to fans of films such as Memento and Clean Slate—that without the gradual onset of long-shadowed memories, the film would have difficulty propelling forward, specifically with how stale or annoying the prospect of Dory’s forgetful nature could become. But, as explained above, this is a Pixar movie, and no humorous ocean stone can be unturned.

Besides, this is a story of perseverance through a mostly underwater world that brings the viewer across the ocean to the polluted terrain of the “Jewel of Morro Bay” (the bowels of the California Marine Life Institute), where cargo boxes, sunken bicycles and assorted garbage mark a much different watery environment. Sidekicks include Hank the Octopus, dutifully voiced by Ed O’Neill, whose splotchy disposition is given legs, err tentacles (seven of them, to be exact … it’ll make sense when you see it) by virtue of a calculated desire to escape the Marine Life Institute for yet another captive life in Cleveland. Hank falls under Dory’s flighty spell, too, assisting in her search for her parents Charlie and Jenny, voiced by Eugene Levy and Diane Keaton, respectively.

Dory’s childhood whale-shark bud Destiny (Kaitlin Olson) is joined by Bailey (Ty Burrell), a Beluga whale with a failing echo-location function, to round out a fantastic ensemble voiceover cast that predictably endears adults and children alike to another home run of a film for the Pixar franchise, and one that doesn’t over-saturate the now-series of the Finding world. 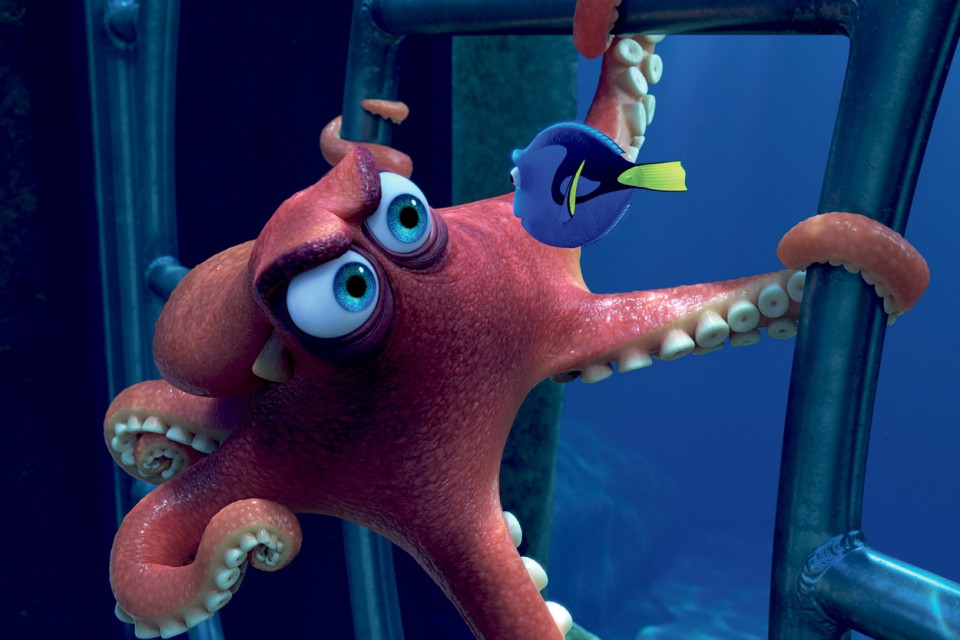 That world this go-around is wonderfully vibrant, excelling in the shifting of environments to steer the viewer toward a more expansive ocular experience. Multiple scenes above-water invite new challenges and new opportunities for fun and laughs, as well as break up the water world doldrums. Sea lions, mechanical fish, clams, crabs, kooky birds and stingrays all make cameos in a no-holds-barred exhibition of marine debauchery. It’s adorable and sweet and funny and oh my god HOW OLD AM I?!

And if you think Finding Dory is great, wait until you see the short Pixar film just before the main feature. Five bucks says you plop an adult tear out of your weary ducts by that little gem’s credits.

Luckily, Finding Dory, like virtually all Pixar films, excels in its abilities to undertake social and even psychological handicaps and project them onto the screen in vibrant panoramas of action and humor, and touching stories of family, loss and recovery. Dory’s perseverance and the triumvirate of the Marlin-Nemo-Dory core is a story of trust, loyalty and love above all else.