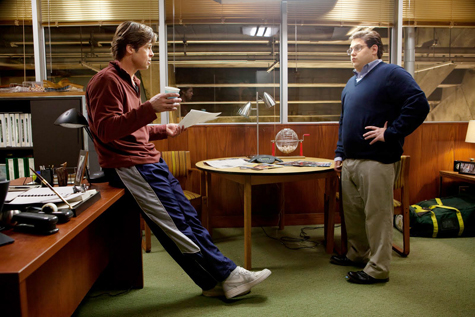 In the 1996 film The Fan, Gil Renard (played by Robert De Niro) tells his son, “Baseball is better than real life–it’s fair.” Of course, Renard turns out to have a few screws loose, but this is a lovely statement about the great American Pastime. Sadly, anyone who’s ever played the game or seen a sharp line drive hit right at someone for an out while broken-bat bloopers drop down the line for game-winning doubles knows that this sentiment is fundamentally flawed. Baseball is not fair. Beyond the mechanics of the game, the institution of Major League Baseball doesn’t seem at all concerned with making sure all of its teams have an equal shot at winning a coveted World Series title. It’s a system that rewards the haves while the have-nots languish in the cellar, serving as little more than advanced farm systems for the teams with the highest payrolls. Hence, you have teams like the New York Yankees who are a perennial lock for serious October baseball, while teams like the Oakland A’s have to make do with what’s left over. This is the dilemma A’s General Manager Billy Beane must face in Moneyball.

Brad Pitt steps into the real-life role of Beane, whom we meet up with as the A’s are facing elimination in Game 5 of the American League Divisional Series. The team had taken the first two from the Yankees–in New York, no less–but dropped two in Oakland, forcing the series back to the house that Ruth built (if you buy into that sort of thing). Beane sits alone in an empty Oakland Coliseum, fiddling with the on-off switch of a battery-powered radio. He can’t listen as the Yankees do what you’d expect of a team with around triple the payroll of its competitor and take the series in dramatic fashion.

It’s a crushing defeat in more ways than one. Beane stands to lose three of his top players–Jason Giambi, Johnny Damon and relief pitcher Jason Isringhausen–to free agency at season’s end. And with Oakland’s paltry revenue, he’s powerless to stop it. He must find a way to fill the void of Giambi’s MVP-caliber season on the cheap. He comes to the conclusion that he can’t. Damon heads to Boston, Giambi to the Bronx, and Beane starts looking for another way.

He meets up with Paul Brand, a fictional character played by Jonah Hill loosely modeled after Paul DePodesta, vice president of player development for the New York Mets. Brand introduces Beane to sabermetrics, a world of exotic stats, such as Batting Average per Balls in Play and On Base Plus Slugging Percentage, developed by Bill James. Brand, a Yale graduate with a degree in economics, tells Beane that instead of spending his limited funds on players, which are expensive, he should be allocating the money to runs, which, as Brand suggests, can be a lot more affordable.

Beane and Brand’s new approach ruffles the feathers of many in the baseball community. It’s also a complete flop, at first, but eventually the lowly A’s take to the new approach and embark on a historic run toward the American League West division title, at one point winning a record-breaking 20 games in a row.

Moneyball hits home on a lot of levels. Intentionally or not, it plays upon the widening economic gap between the top 1 percent and the rest of us. In theory, there really is no way the A’s could ever compete with the Yankees. They don’t even belong on the same field. Yet, in the span of one at-bat, as one commentator’s voiceover intones toward the end of the film, anything can happen. If money really bought championships, the Yankees would win every year, yet–no matter what the team’s fans would have you believe–they don’t. Conversely, if Beane’s highly analytical approach was really the key to “changing the game forever,” the A’s would be unstoppable. Sadly, there are probably many Oakland fans who are well aware that is not the case. It’s this mix of improbability versus futility that makes Moneyball such a fascinating drama.

Life ain’t fair, and neither is baseball, which is probably why it makes such engaging fodder for stories. Moneyball is blessed with a fantastic script co-written by The Social Network’s Aaron Sorkin and Schindler’s List’s Steven Zaillian, and Pitt could be nomination-bound for his best role to date, cementing his place as his generation’s answer to Robert Redford. Moneyball is a must-see for any baseball fan and a wonderful look at the lives of the people behind the statistics.