The Dying Wish of Print Journalism

Based on a true story, Kill the Messenger is a sort of there and back again story, almost classical in its form: setup and reversal. The first half focuses on journalist Gary Webb (Jeremy Renner) writing an exposé that opens up an international conspiracy that shakes the nation. The second half explores the backlash that dismantles Webb’s professional and personal life. The acting is above par. Rosemarie DeWitt as Sue Webb, solid; Mary Elizabeth Winstead shows some diversity. Shout outs to Michael Williams, Oliver Platt, Andy Garcia and Ray Liotta: what a cast.

While reporting on the police and illegal asset seizures, Webb is handed a grand jury transcript which reveals that a major drug trafficker is also a federally protected witness. Webb travels to Los Angeles, Nicaragua, Washing D.C. and elsewhere following leads. He does all the things he’s supposed to do. He’s shown as an imperfect but decent father and a determined journalist.

The setup culminates with him writing the story in a montage with the Clash providing the diegetic soundtrack. His story, “Dark Alliance,” sheds light on a CIA operation that knowingly allows Nicaraguan contras to smuggle coke into the United States, while the war on drugs is going full tilt. The contras then use the funds to continue their fight against democratic socialism—the real menace of the Cold War.

The story is published in both print and online for the San Jose Mercury News in 1996. For the reporting, Webb receives instantaneous, widespread praise. There’s a series of scenes with him enjoying his loving family. He’s even named journalist of the year.

However, act two is the reversal. Shortly after his story breaks, the major players in print journalism—the New York Times, The Washington Post, and the L.A. Times—deconstruct the story and the man until there is little left of a life for Webb. The CIA denies the connections, and the mainstream press swallows. Webb is trivialized as a person, his story made speculative. Even the Mercury News publishes a letter from the editor noting a lack of rigor.

But his story still has pull. John Kerry initiates some congressional hearings, and CIA representatives even have a town-hall meeting with the outraged citizens of Watts. But it’s clearly Webb who suffers the cost of introducing fire to civilization.

He’s marginalized within the Mercury News, e.g. sent to Cupertino. He has to inform his eldest son about his previous marital infidelity. His marriage suffers, likely influenced by his irregular employment after quitting the Mercury News. He quits the paper. In a local connection but outside of the film, he spends the last four months of his life at the Sacramento News & Review. (Divorced and battling depression, Webb killed himself in 2004.) 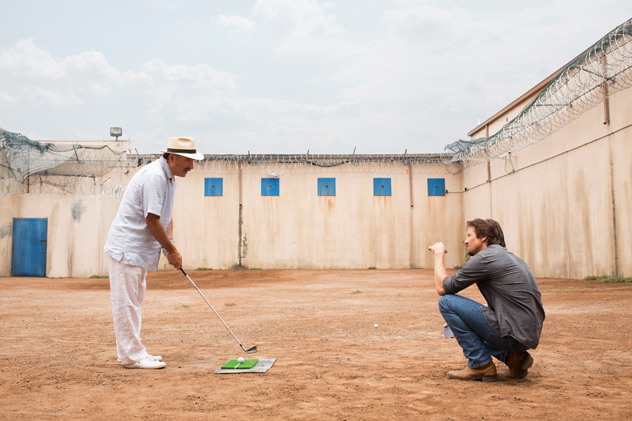 Yet the CIA releases some 400 pages of classified information that largely confirms the basic tenets of Webb’s “Dark Alliance” in 1998. And Webb never gets another steady job writing at a daily.

And this is the most interesting conflict of the film—which, to be clear, I’m separating from the real Webb’s life. The film itself is a sort of David vs. Goliath story. Webb, the small-time writer from the small-time publication, cracks the story the majors couldn’t see. The film is some vindication of this act.

And yet, it’s also a sort of eulogy for print media itself, of the hard-hitting journalism variety. Webb is the final stand-in for major print publications that have all crumbled or are still crumbling in the wake of the Internet. And Webb’s story, “Dark Alliance,” is one of the first pieces to push media past this threshold. Released on the Mercury News’s website, it was the first major news story of the internet age. It nudged journalism across this precipice, and the consequences are trending all around us in Web 2.0, where we deal with the dual conflict of too much information and not enough depth. The Internet, as the saying goes, is immense and flat. Startlingly, this is similar to the critique that Webb received for his work.

Journalism, in attempting to generate more clicks, has largely succumbed to the depthless model. If you don’t believe me, turn on a cable “news” station. CNN recently interviewed “experts” asking if Ebola is the ISIS of global terror—without irony. It’s hard to find genuine news in the mainstream media that doesn’t just reproduce a press release these days, in print or otherwise. The hard-hitting conspiracy stories seem to come from the distant nether-reaches of the web. And in this way, Webb’s “Dark Alliance” might have just fit right in today. But, after COINTELPRO, stingrays, Heartbleed and the Federal monitoring of our collective Internet use, our post-Patriot Act America might not know legitimate reporting, like Webb’s groundbreaking work, if it tried to hook up with us on Tinder. Kill the Messenger wants us to believe in a journalist, yet, at a time when we’re losing tens of thousands of journalism jobs a year, it’s hard to even believe in journalism. But at least we took care of democratic socialism.