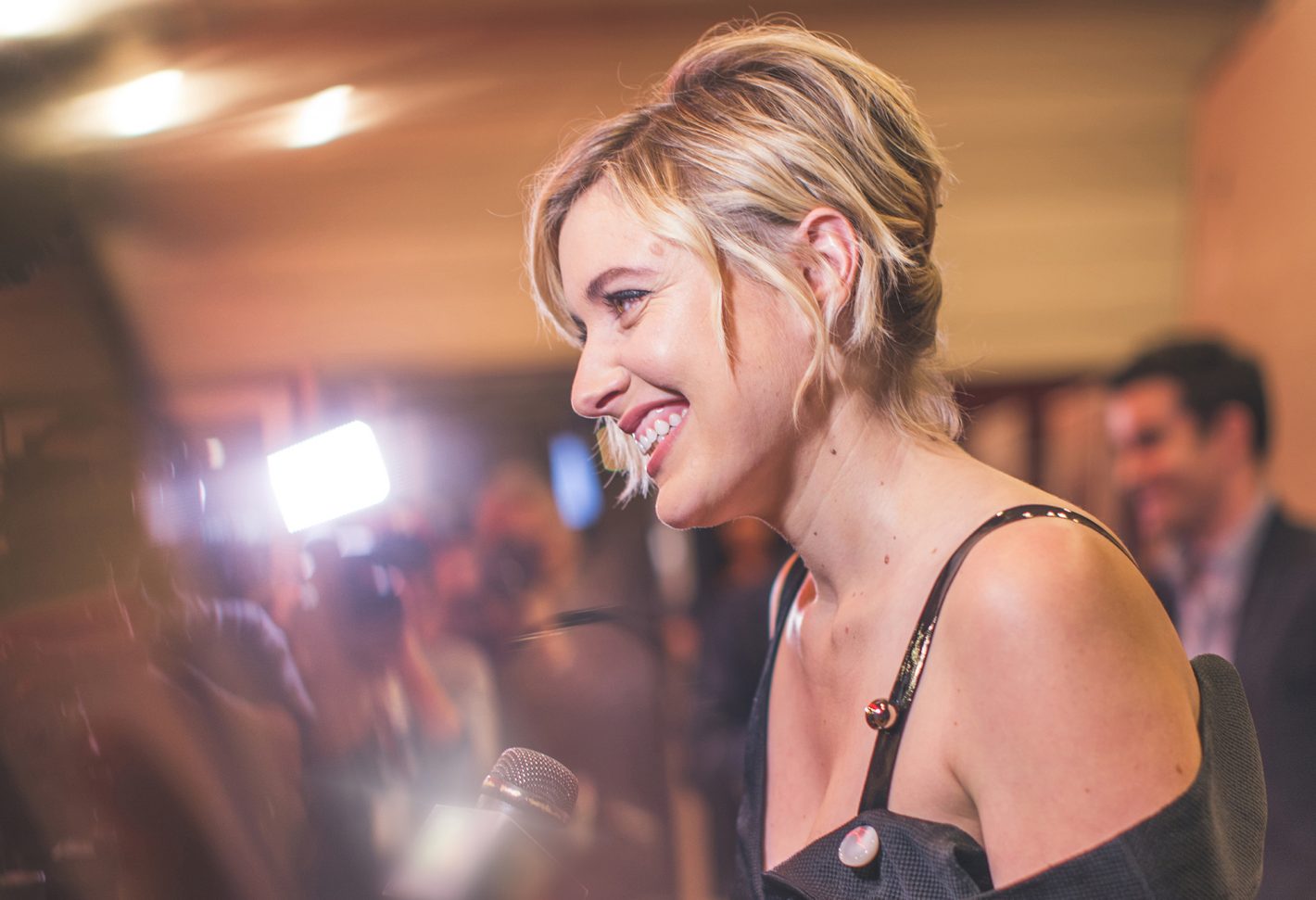 “Do I look like I’m from Sacramento?” begins Lady Bird, the film that marks the directorial debut of Sacramento native Greta Gerwig. Despite the protagonist’s deepest convictions that Sacramento is only worth it if you have a house in the Fab 40s, Lady Bird is one of the most beautiful love letters ever to be written about our city (I mean, there’s probably not many of those floating around, but that’s beside the point).

For the hometown premiere/sneak peek of Lady Bird, which took place at—where else—the Tower Theatre, Gerwig did more than just send a love letter to Sacramento. She delivered it herself, making her way down the (short) red carpet surrounded by flashing cameras and onlookers, heading to dinner at the neighboring Tower Café. And true to the Sacramento spirit, Gerwig took an Uber.

After appearing in more than 25 films including Frances Ha (2012), which she co-wrote with Noah Baumbach, Greenberg (2010), To Rome With Love (2012), Jackie (2016) and 20th Century Women (2016), Gerwig has an impressive stack of credits as an actress and cowriter. Lady Bird is her first time writing and directing a feature film. And holy cow(town), are critics loving it. 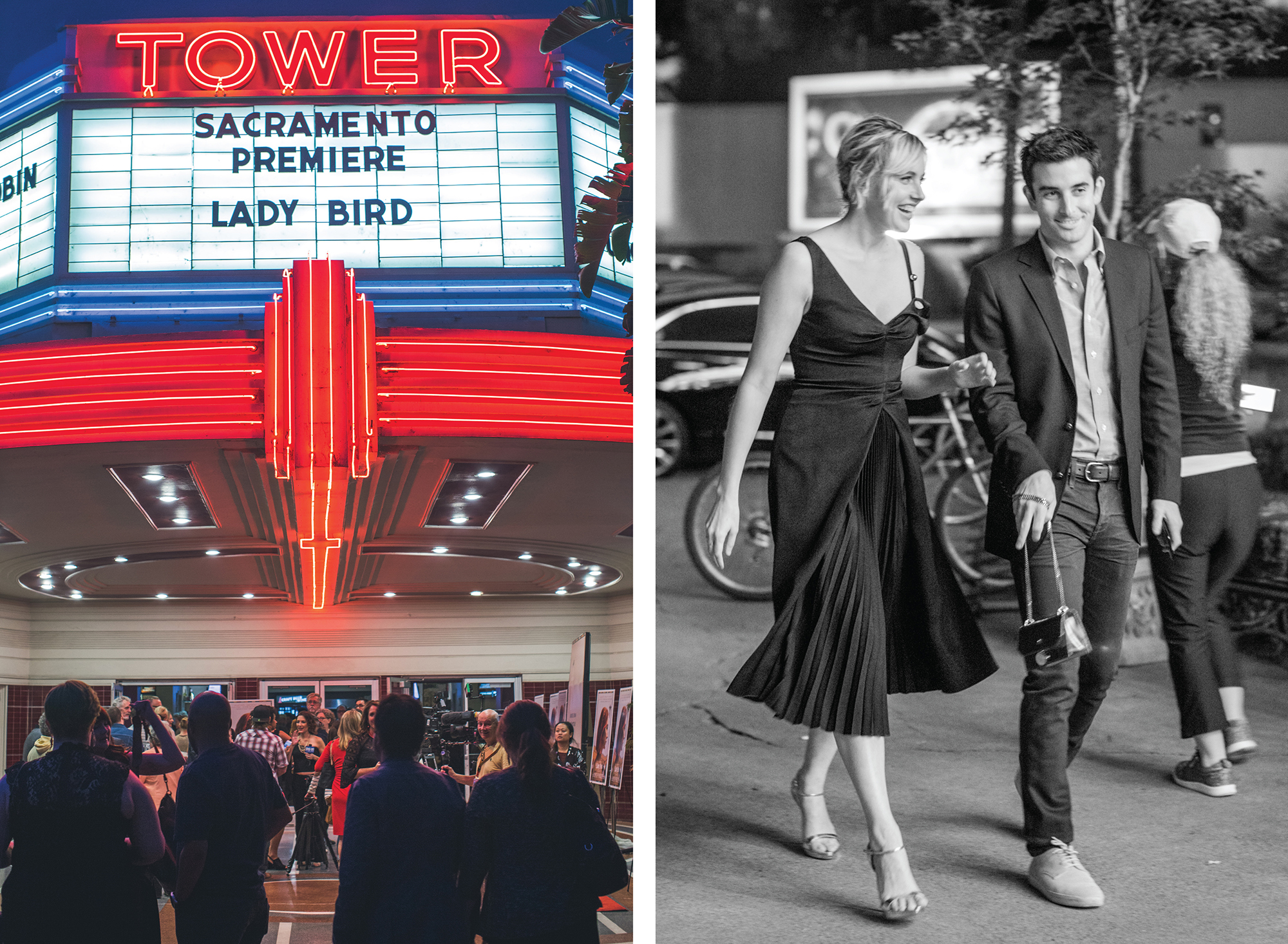 Wearing a simple black dress and silver heels, Gerwig gave the impression that she was on her way to her first school dance and she was nervous, but it was the kind of nervous that Molly Ringwald owned in every John Hughes movie in the ‘80s. Gerwig was still the coolest girl in the room. And she was happy to be here. She leaned in as I peppered her with questions about Sacramento. “I love it here. I was raised here, my family is here, I hate that I don’t get back enough,” she said.

Lady Bird is a coming-of-age story about a very confident Catholic-high-school senior, Christine “Lady Bird” McPherson, played by a feisty Saoirse Ronan, who hates Sacramento, hates her all-girl Catholic school and hates her mother—played by a wounded-yet-tough Laurie Metcalf. Lady Bird is hell-bent on getting the fuck out of Dodge.

Just like Lady Bird, Gerwig attended an all-girl Catholic school (St. Francis High School, where else?) in the early 2000s, where she undoubtedly hung out in the same places as her leading lady in the film. While this movie is not an autobiographical depiction of Gerwig’s teenage years, there are emotional similarities and parallels within her own life.

“There’s going to be a lot here that you recognize,” she laughed as she addressed the Tower Theatre, filled with friends and family, which made the sentiments all that more sweet. According to Gerwig, her first-ever crush was also sitting in the theater (watch out, Noah Baumbach!). 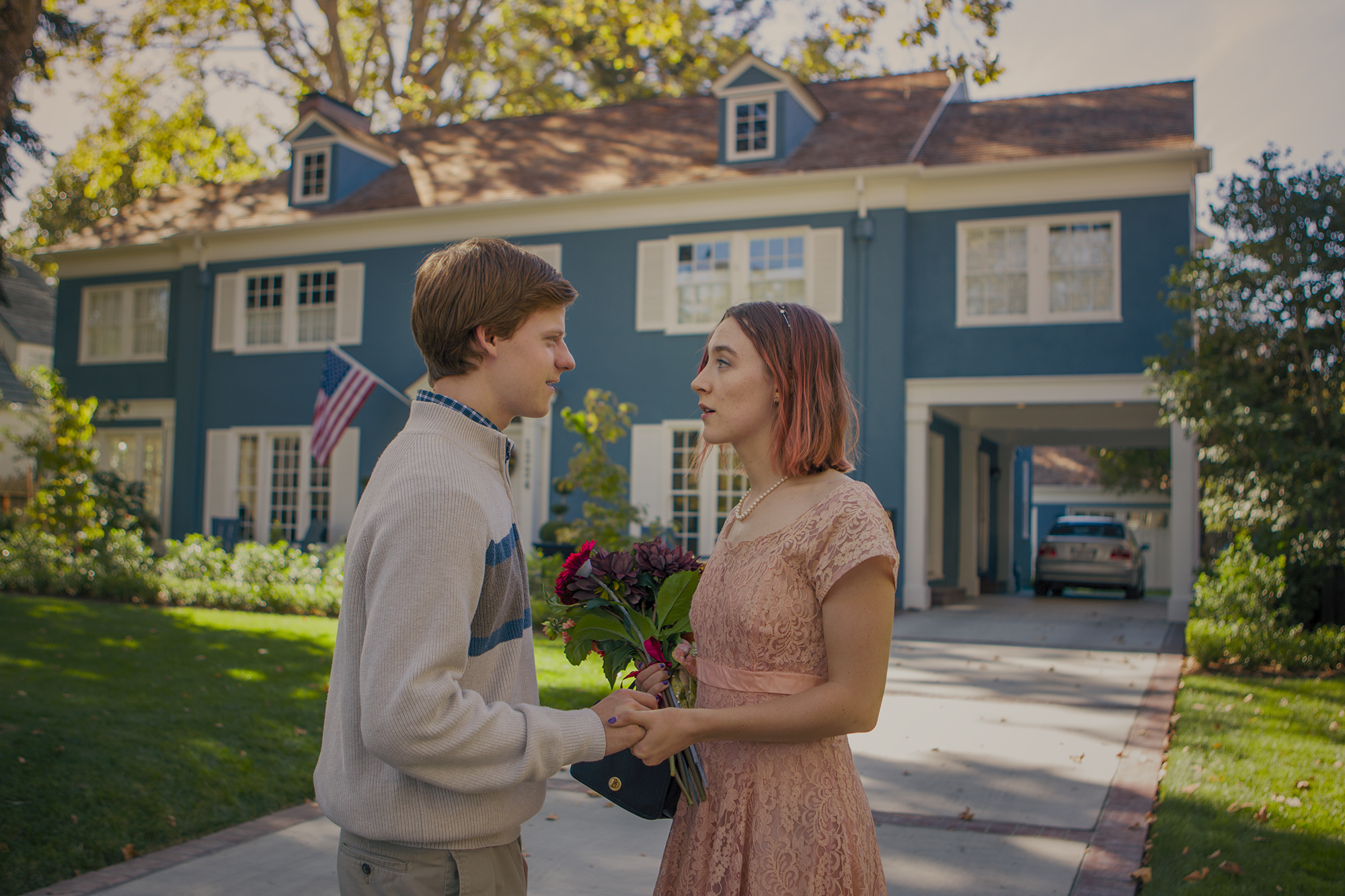 Lucas Hedges and Saoirse Ronan | Photo by Merie Wallace, courtesy of A24

Gerwig said Lady Bird is a love story, but not in the traditional sense.

“I wanted this to be a love story between a mother and a daughter,” she said. “I feel like that’s such a beautiful, complicated, amazing relationship that doesn’t get enough time in movies. We treat it like it’s a side-note to the main story, which is usually a romance for a woman. But what if that’s the main romance? I mean, I think everybody knows that moment in a movie where a person runs through the airport looking for someone, but what if it’s a mother looking for a daughter?”

As the two central characters in the film bicker and disagree with each other as mothers and daughters do, Gerwig said the chemistry between Ronan and Metcalf was on-point from the beginning.

“When Saoirse read the script she contacted me and said, ‘I know I’m from a tiny town in Ireland, but I’m telling you, I know this story. I know it in my bones. I know I can do this,’” Gerwig explained. “And she was right.”

As for Metcalf, who nails the part of the prickly-yet-lovable Marion, “After I offered her the role, she said, ‘I currently have a 17-year-old who is trying to kill me, so let’s do this movie,’” Gerwig recalled.

Gerwig’s goal was to have her characters be nothing more than real.

“The daughter can be a jerk, it doesn’t mean she’s a jerk completely. You can say the wrong thing and want to take it back,” she said. “If you try to paint it as all ‘perfect,’ the love wouldn’t seem real. And the love seems real because these are not perfect people. And there are no perfect people.” 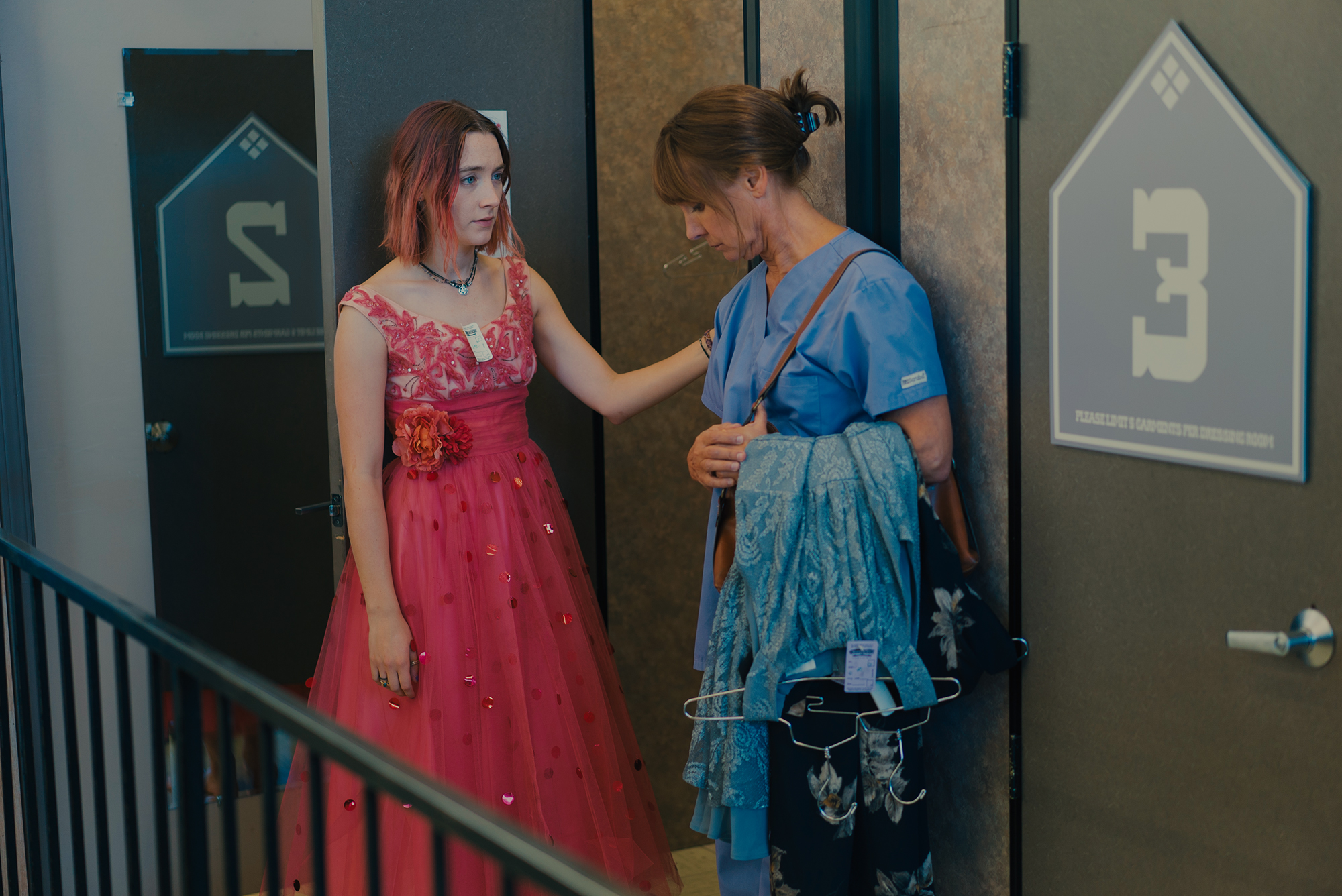 Saoirse Ronan and Laurie Metcalf | Photo by Merie Wallace, courtesy of A24

Gerwig knows a thing or two about getting those real emotions out on the screen. In an essay she wrote for The New York Times Magazine titled “One Scene, 42 Takes and 2 Hours in a Bathroom Stall,” Gerwig broke down each take of a particular scene in Frances Ha that she couldn’t get right. She described the painstaking frustrations of understanding the need to perform well, but not being able to because she was too busy getting in her own way. This experience fueled her empathy while writing and directing Lady Bird.

“Every moment—in front of the camera and behind the camera—I’ve spent on set, I use as my own film school,” she said. “It sounds ridiculous, but when I decided I wanted to direct this film, it was like that scene in Karate Kid when he realizes he can do karate when he’s waxing the cars. I was the Karate Kid. I knew it instinctively, and I had on-the-job training watching other people work. I was so lucky to have been around so many great directors, cinematographers and production designers. They taught me how much work it is, but also how much joy it is to see it come to life.” 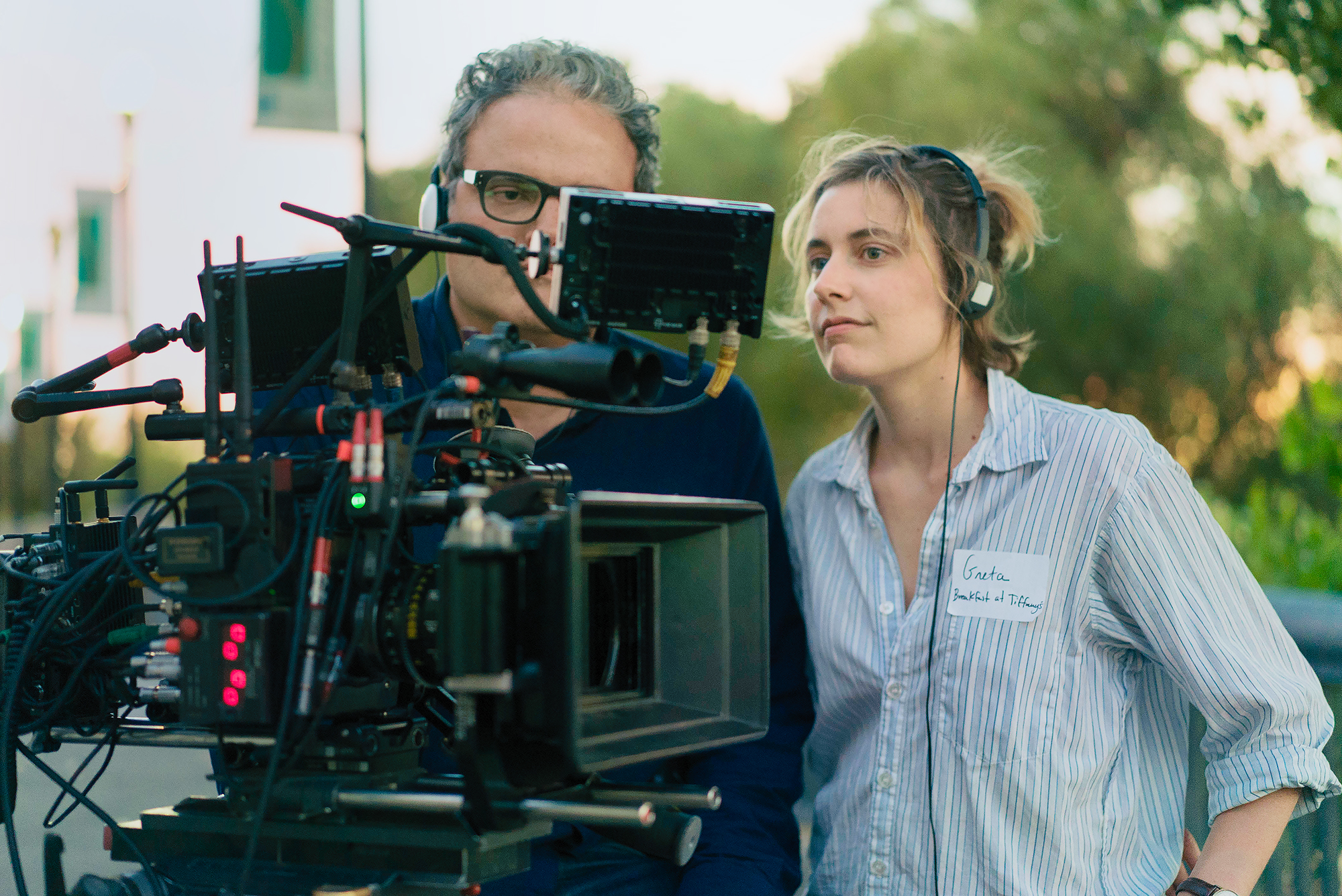 Sam Levy and Greta Gerwig on the set of Lady Bird | Photo by Merie Wallace, courtesy of A24

While Lady Bird may be a fictional character, Sacramento rings true in this film—from the Tower Bridge, to familiar murals on bodega exteriors, to houses in the 40s, to That Rose Garden Everyone Takes Their Parents to When They Visit.

“With Sacramento, there are specific streets I love, places I love and murals I know—all these details were important to the story,” Gerwig said. “And when I brought my crew from L.A. to Sacramento, they were all checking Zillow to see if they could get a home here!”

And Gerwig pulled no punches when her Lady Bird characters crack jokes that only locals would appreciate (a character response to a high school girl driving a Land Rover: “They should outlaw those things. They’re not off-roading. They’re going to the Pavilions.” Or Lady Bird’s mother telling her to just go to City College, then jail, then back to City College). The film is chock-full of hometown gems that will have every patron in the theater nodding voraciously, or in some cases simply stating, “Oh honey, I know.”

“I wanted to capture something that I couldn’t understand in a profound way until I was leaving. The older I got, the more I appreciated what an incredible place this is,” Greta said. “This was really a desire to make a movie about home, and home is something that you can really only understand as you’re leaving, and you can’t really understand how much you love it and how much it meant to you. Sacramento is that place to me. This is that love letter.” 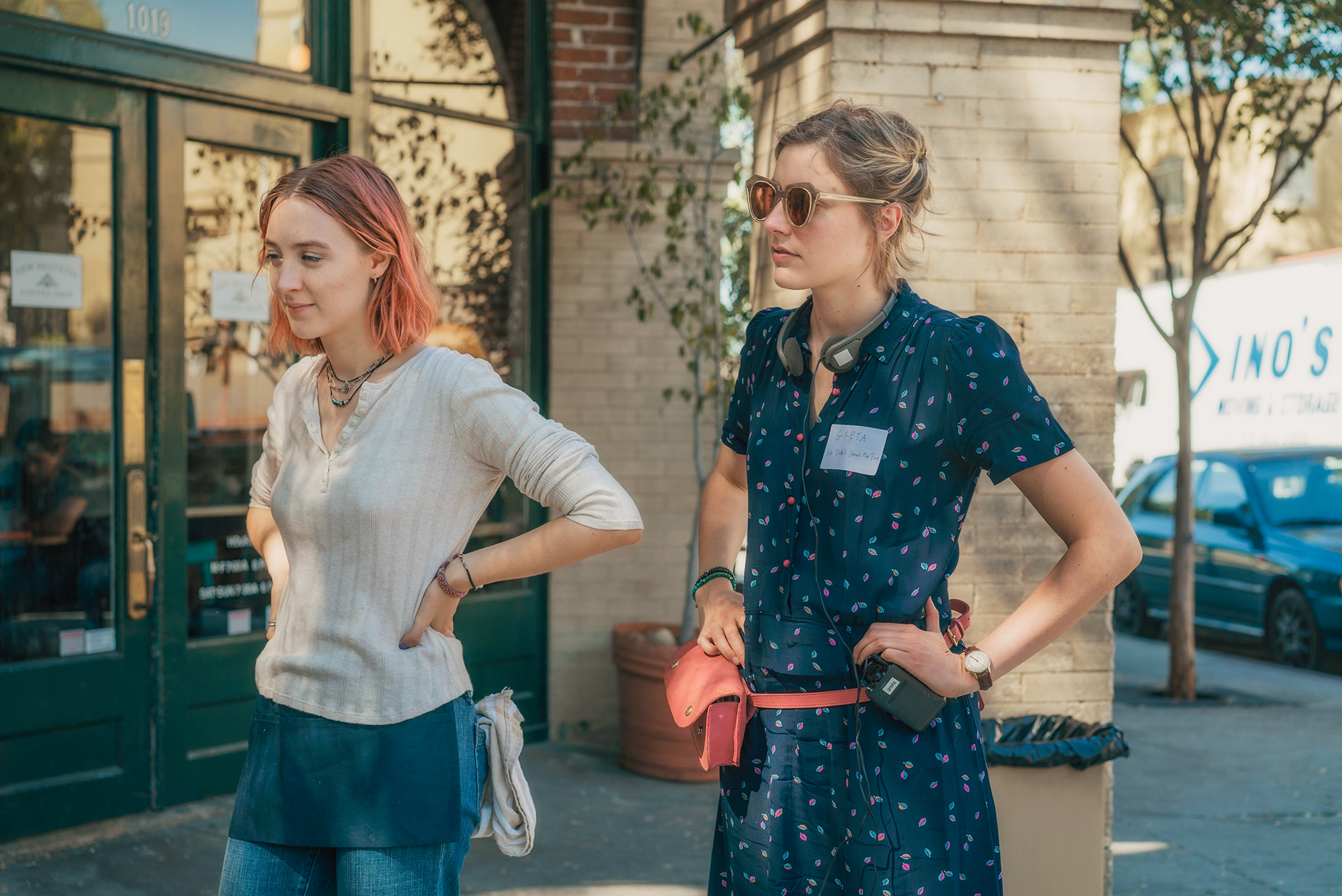 Saoirse Ronan and Greta Gerwig on the set of Lady Bird | Photo by Merie Wallace, courtesy of A24

But like any good love letter, there are a lot of painful truths in this tale. Beyond the mother-daughter struggle, this film tackles betrayal, disappointing sex (which Lady Bird is assured is going to happen a lot in her future) and the stupid things teenagers do in reaction to simple obstacles in life. In fact, Gerwig remarked that, “with every character in the movie, I wanted it to seem like every single character is in the middle of their own opera, and if you followed any one character they could have their own movie.”

One thing Gerwig does not do is feed the stereotype of the Catholic school experience.

“I have actually known a lot of groovy nuns and priests in my life,” she said. “They were thoughtful and empathetic. I think sometimes they get reduced to their role or their outfit. I wanted them to seem like people.” 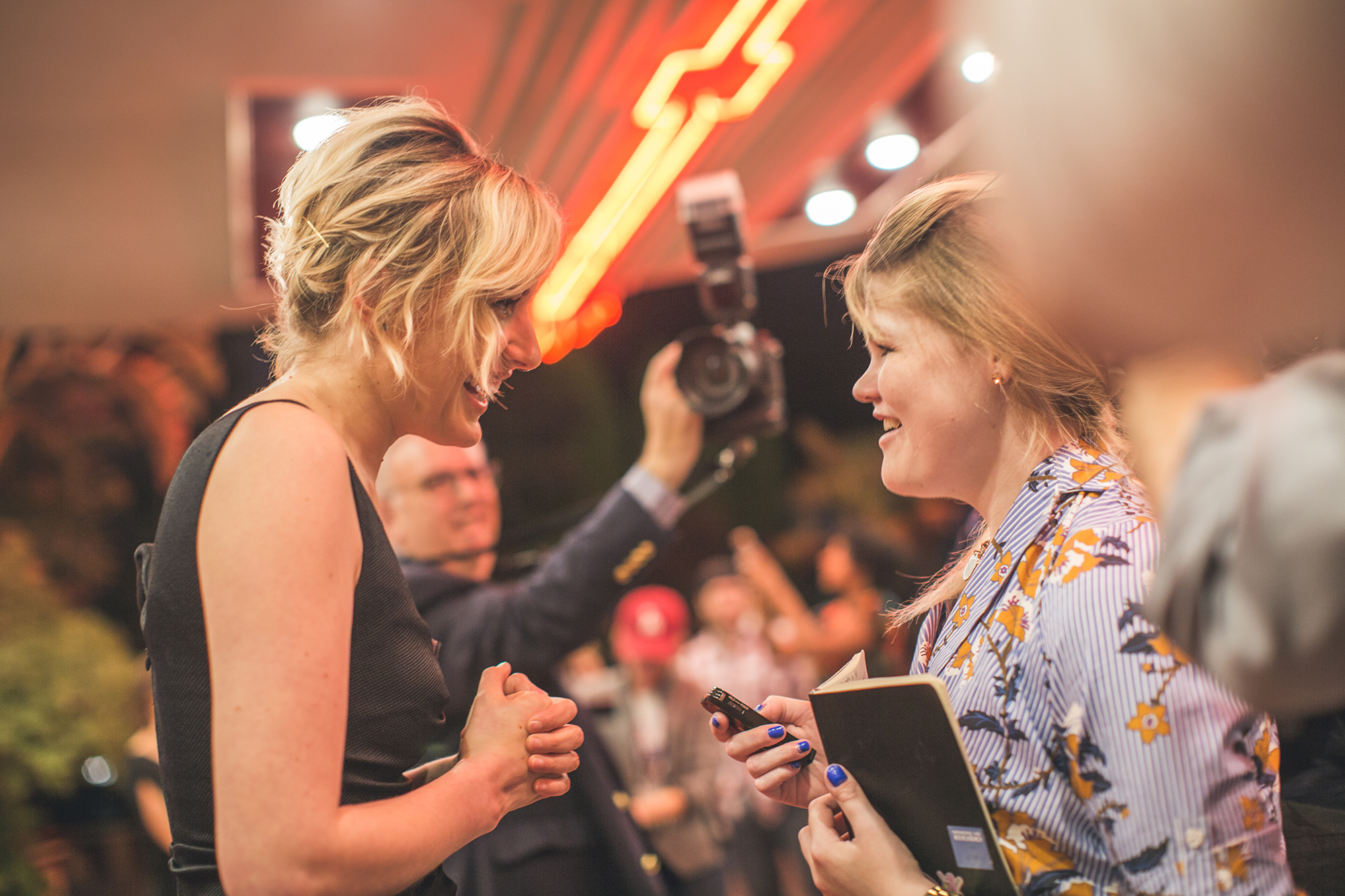 Speaking of human nature, I asked Gerwig a typical question: What do you have to do when you visit Sacramento? Her answer came quick. “I go to Tres Hermanas. I went this morning and ate tamales at 11 a.m.,” she said without shame, and in this moment I saw Lady Bird in real life. Sacramento salutes your good taste in Mexican food, Greta.

Perhaps one of the most stunning takeaway moments in this film (besides Gerwig admitting she almost added a title card at the end saying, Call your mother!) is when Lady Bird is meeting with Sister Sarah Joan, the school principal, who tells Lady Bird she is impressed with her detailed essay for a college scholarship: “It’s clear how much you love Sacramento,” says the nun. “I guess I pay attention,” responds a surprised Lady Bird. “Don’t you think they’re the same thing?” asks the wise nun.

Indeed, maybe they are.