Listen, Or You’ll Miss It 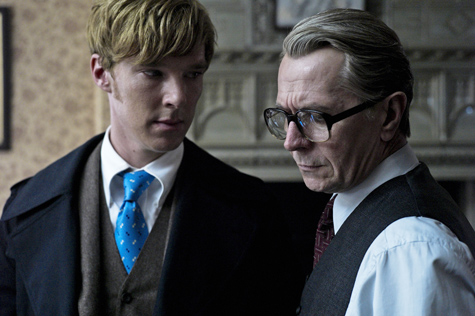 Funny story. The theater where I saw Tinker Tailor Soldier Spy saw fit to place the film on the screen next door to a big action movie (I assume the new Sherlock Holmes). This had no real bearing on my enjoyment of the Gary Oldman-led Cold War-era spy drama, but it was certainly an odd juxtaposition. The walls rattled under the brunt force of the skull-rattling sound effects next door; meanwhile, inside our cozy, sparsely populated theater, Oldman and company built intrigue the old-fashioned way–with dialogue.

Not that they spoke all that often. In fact, Oldman, in the role of semi-retired British intelligence agent George Smiley, remains silent in his first five or so minutes of screen time. The point here being: pay attention, because when someone does open their mouth, it’s probably important.

The main action in Tinker Tailor Soldier Spy takes place in 1973, a year after a British intelligence agent by the name of Jim Prideaux (Max Strong), is presumably gunned down by Soviet operatives while on a mission in Budapest. Control (played by the great John Hurt) has sent Prideaux behind the Iron Curtain to the Hungarian capital so that he may learn the identity of a mole occupying a high-ranking seat in MI6. Prideaux ends up shot in the street, and the botched mission precipitates a major shakeup at the agency, resulting in the expulsion of Control, who passes away soon thereafter, and the erroneously named Smiley.

It’s not over for Smiley, though. News of a mole in MI6 has spread to other levels of the British government thanks to rogue agent Ricki Tarr (Tom Hardy). Smiley is brought in to investigate the remaining powers-that-be of British intelligence: Percy Alleline, Bill Haydon, Roy Bland and Toby Esterhase (Toby Jones, Colin Firth, Ciarán Hinds and David Dencik, respectively).

Tinker Tailor Soldier Spy is a study in subtlety. Major reveals unfold in gestures as the true nature of the plot slinks spy-like in the shadows. At times, like the spies depicted herein, the film is almost too sneaky as it shifts without warning from the present to a “happier” time in the past, when Prideaux, Haydon, Alleline, Bland, Esterhase, Control and Smiley all worked together to further the British war effort. In a scene between Smiley and another dismissed operative Connie Sachs (Kathy Burke), she bemoans a time when the English had a right to be proud. Here, the film makes a neat statement about the shifting nature of war–from an idealized time (if you could call it that) when brave combatants honorably faced off on the field of battle, to the Cold War model, where decrypted telegrams and double-crosses became the weapons of choice.

But even when the film leaves its audience straining to keep up with its levels of intrigue, Tinker Tailor Soldier Spy still boasts quite an arsenal. Its cast is impeccable, turning each economical line of dialogue into a multi-faceted gem worth pondering over. Oldman distinguishes himself even among such distinguished company. He has an uncanny knack to say so much with a single expression, without uttering a word. For the most part, he wears a sullen countenance and a monotone voice. But as he begins to unravel the film’s mystery, glimmers of a sly fox begin to shine through. Elsewhere, at an office holiday party that serves as a sort of touchstone flashback throughout Tinker Tailor Soldier Spy, Smiley discovers his wife cheating with a coworker, and his stoic exterior cracks in a painfully human manner.

Oldman is worth the price of admission. The taught, cerebral suspense is just icing on the cake. Silence truly can be golden.