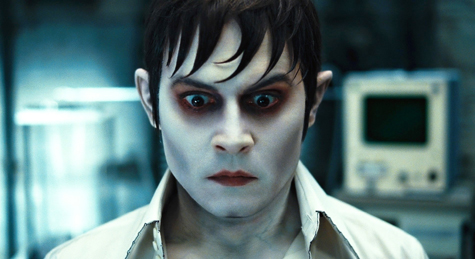 Tim Burton is one of the most recognizable directors of the past three decades. (Can you believe Pee Wee’s Big Adventure was released almost 30 years ago?) Not only does he look like he could have walked out of one of his own movies, but his filmmaking style is so distinct, it’s unmistakable. He’s practically become his own genre at this point. But is the shtick getting old?

In the Burton film, the director teams up once again with leading man Johnny Depp as the emotionally conflicted vampire Barnabas. The film opens in the mid-18th century, as the Collins family leaves Liverpool, England, to expand its fishing empire to the New World. The family settles in Maine and founds a town (Collinsport), and erects a lavish estate (Collinwood), as its home. The Collins family is much beloved by the townsfolk, but fickle Barnabas has run afoul with the wrong woman. Angelique Bouchard (Eva Green) is beautiful and borderline obsessed with Barnabas; he doesn’t seem to mind fooling around with her; but, as the saying goes, he’s just not that into her. When his affections turn toward Josette DuPres (Bella Heathcote), Angelique loses it. What’s worse, this woman scorned is also a powerful witch. Using magic, she kills Barnabas’ parents, causes Josette to take a plunge off a cliff and curses Barnabas to walk the Earth forever as a vampire.

That’s not enough for Angelique, however. She leads the town in a witch hunt against Collins, which leads to him being chained, stuffed in a coffin and buried. He remains that way for almost 200 years until construction in the Maine woods outside Collinsport disturbs him from his slumber. He finds himself in the ‘70s with his family’s name and wealth in the wane and his beloved Collinswood in disrepair.

The trailers for Dark Shadows had the film poised as a wacky dark comedy, but it seems to have a bit of an identity crisis. After the opening montage that spells out Barnabas’ past, the film focuses on Heathcote, now in the role of Victoria Winters, who is drawn to Collinswood in pursuit of a job as a governess. If anything, this is one of the most striking sections of the film–mainly because it’s decidedly un-Burton. As Winters rides the train through New England and eventually hitchhikes with a group of hippies, Dark Shadows takes on an almost bucolic quality. The scenery and setting speak for themselves, and a sense of a real time and place takes root. 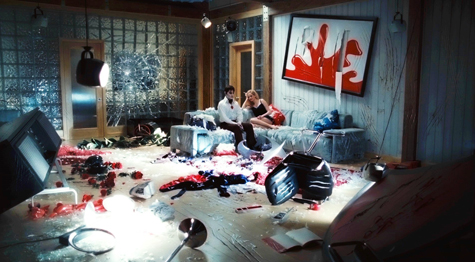 However, once Winters makes it to Collinswood, it’s Burton full-bore–not that that’s a bad thing. The acting becomes big, the situations are over-the-top and the characters become caricatures. Green and Depp are up to the task. Green is deliciously evil as the film’s villain, who in ‘70s Collinsport has supplanted the Collinses as the top entrepreneur in the fishing business, and Depp alternates between gravely serious to ridiculous. Unfortunately, his funniest moments don’t manifest in dialogue but in his confused reactions to the strange modern world he’s awoken to. Helena Bonham Carter and Jackie Earle Haley also pitch in, but seem under-utilized. On the flipside, megastar Michelle Pfeiffer (Burton’s Catwoman in Batman Returns) is forgettable as matriarch Elizabeth Collins Stoddard; and young rising star Chloe Grace Moretz sinks as Pfeiffer’s over-sexed teenage daughter Carolyn.

Most of Dark Shadows’ best moments occur between Depp and Green, especially a raucous supernatural love scene, but the script feels so fractured, it seems more like it’s jumping from moment to moment than telling a cohesive story. First it focuses on Barnabas’ relationship with Victoria, who seems to be the reincarnation of Josette; then jumps to the Collins family’s attempt to resurrect its fishing empire; then to the troubles young David Collins (Gulliver McGrath) is having with his father; then, back to Barnabas and Victoria, a thread that suffers from the two characters having very little screen time together. Perhaps this is the problem with adapting a series that lasted six seasons into one two-hour film. Unfortunately, the laughs aren’t big enough to cover up the sloppy storytelling.

I’m not ready to toss Burton’s shtick in a coffin and bury it–even though Dark Shadows doesn’t hit the mark, it’s still fun to look at–but it will certainly need some resurrecting after this one. Hopefully, the October release of the animated Frankenweenie

will do just that.