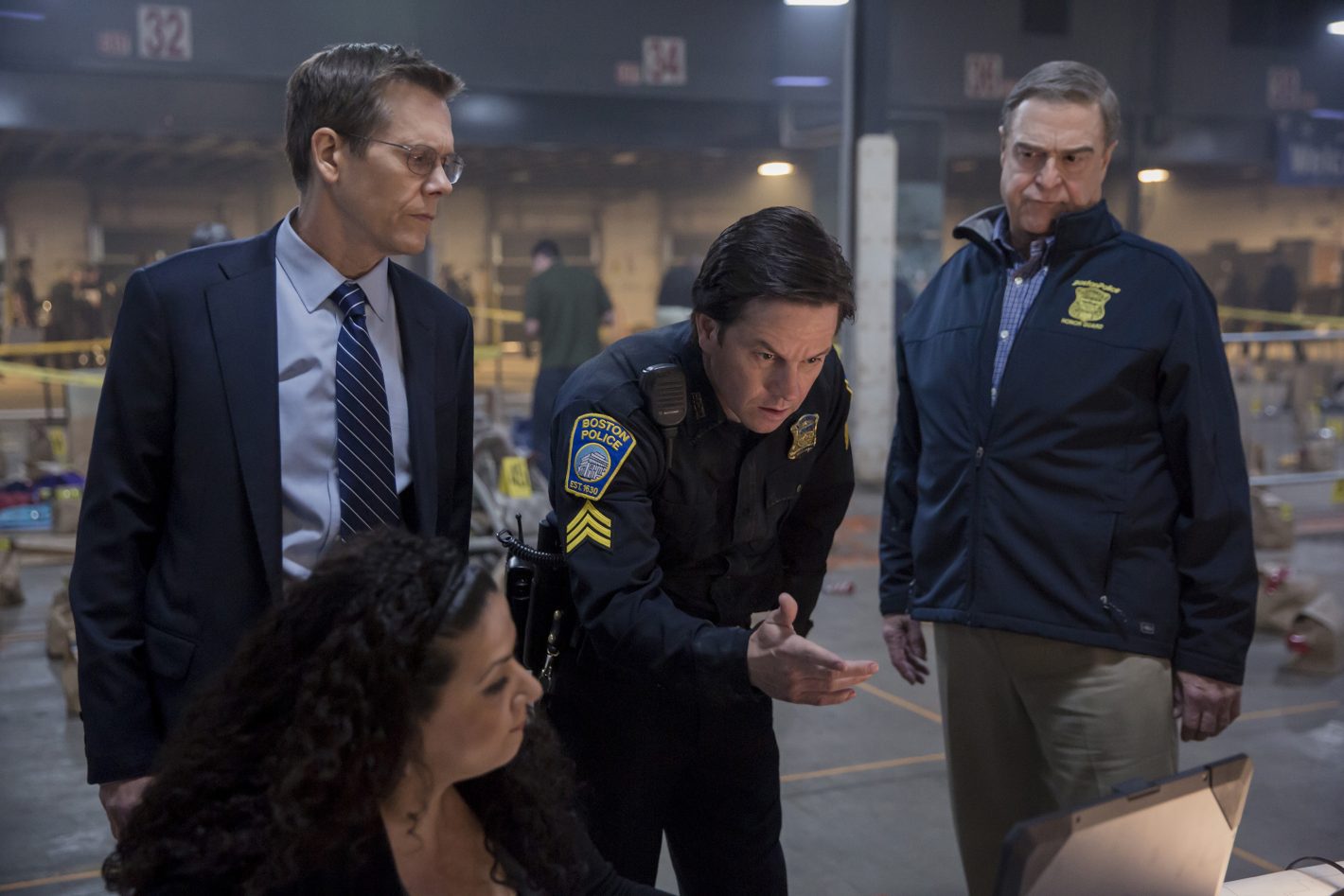 There’s this weird feeling that comes only after walking out of a film “based on actual events.” The actual events inevitably being ones you don’t know all the details of, an inclination exists to take what appears on screen at face value, based off your overall enjoyment level. Captain Phillips, for example: I felt tugs of “U.S.A.! U.S.A.!” Until I learned that most of the narrative was made up, and that, in fact, Phillps’ own crew detested him, and put the entire disastrous episode on his shoulders in the first place. Similarly, as Patriots Day came to a close, I looked over to my friend and said, “That was a really good movie for what it was.”

In this instance, director Peter Berg (Battleship, Lone Survivor) depicts the Boston Marathon bombing of April 2013. Mark Wahlberg portrays Boston Police Department officer Tommy Saunders, a gung-ho cop with a winning smile and plentiful helping of rough-and-tumble “Baaastin” charm. As the tragic events of that day unfold, the low-ranking Sgt. Saunders is seemingly everywhere: Finish line ground-zero, FBI headquarters, the Watertown shootout, the arrest of Dzhokhar Tsarnaev, shaking David Ortiz’s hand at Fenway Park. He’s involved in answering all the tough questions: Which security cameras should we pull? When should we release suspect photos? And what does it all mean? Because Sgt. Tommy Saunders is a hero. He is true blue; the very embodiment of “Boston Strong.”

But Tommy Saunders wasn’t at the finish line when the Tsarnaev brothers detonated homemade bombs, killing three and destroying the limbs of dozens. He wasn’t instrumental in piecing together security camera footage of the attackers with Special Agent Richard DesLauriers. He didn’t relay the vehicle GPS number of Dun Meng’s stolen Mercedes. He wasn’t on-scene for the Watertown standoff that claimed the life of Tamerlan Tsarnaev and ultimately officer Dennis Simmonds. He never made an absurd and clichéd speech about love and hate to future Police Commissioner Bill Evans, and he didn’t find Dzhokhar Tsarnaev hiding under cover of a backyard boat in residential suburbia.

That’s because Sgt. Tommy Saunders doesn’t exist. He was a composite character intended to represent the good deeds and hard work of many different people. Because—clearly—the events of the week of April 15, 2013 were not gripping enough as is. What they really needed was Mark Wahlberg.

Peter Berg’s intention was not meant to be one of offense, and he didn’t direct Patriots Day in a fashion that was particularly extreme in the scope of contemporary cinematic nationalism (American Sniper) or xenophobia (Argo). Some of his depictions are factually accurate, from the explosions themselves on Boylston Street to Dun Meng’s interactions with the Tsarnaev brothers upon his car being hijacked.

But the industry-standard arrogance which tells us that tragedy is insufficient is both condescending and disrespectful. What about the Marathon bombings and five-day manhunt that followed wasn’t “riveting” enough for the big screen? What about the murder of MIT police officer Sean Collier needed the inclusion of a love interest and hot date to see the Zac Brown Band? And what exactly about the strengths of ordinary Bostonians isn’t valiant enough to be played by multiple character actors?

The answer is simple: Hollywood thinks you’re stupid. Hollywood thinks I’m stupid. They take us for saps, and prey upon our basest human interests and emotions simply because they can. I mean why would we want to see a bunch of no-names depict everyday citizens and law enforcement when we could be watching one single Marky Mark for 133 minutes? And why would we want to see a boring, run-of-the-mill gun/grenade fight that claimed the life of a domestic terrorist when you could just as easily take a page from Bad Boys II and start flipping cop cars upside down and 10 feet into the air? Oh and I guess I never realized or maybe just forgot that people from Boston have accents. So it’s good of Berg to make sure there isn’t one single “R” pronounced in the entire film.

There were good performances in Patriots Day. Jimmy O. Yang was absolutely excellent as the aforementioned Meng, and Kevin Bacon was intense and precise as Special Agent DesLauriers. But what had the chance of being a really great true-life drama was in the end just another major motion jerk-off, brazenly pandering to masses it never had to pander to in the first place. Best of luck to Berg-Wahlberg 4.0.