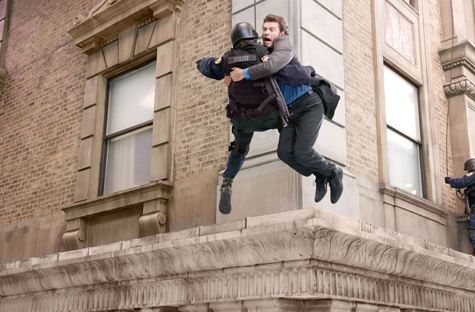 Man on a Ledge

Man on a Ledge begins much as its title suggests it would, with Sam Worthington playing ex-cop turned escaped felon Nick Cassidy stepping onto the ledge outside his 21st floor New York City hotel room window. As a lady on the street below screamed, “There’s a man on the ledge,” I was instantly reminded of a drinking game a friend of mine once told me about. The rules, as they were explained to me, was that every time a character in a movie says the name of the movie, or some derivative thereof, you take a shot. As it turned out, if I had gone to the cinema prepared, I would have caught a decent buzz about 10 minutes into the film. It’s a shame, because I sure could have used it.

As previously stated, Worthington stars in the role of Nick Cassidy. He’s serving 25 years in Sing Sing for a crime he says he didn’t commit. He has a death wish–or so it seems–and he regularly gets into fights with other inmates. He gets a day outside prison walls to attend his father’s funeral, but he ends up putting his mourning on hold long enough to kick his little brother’s ass (in front of his girlfriend no less) and escapes the authorities. Instead of high tailing it to Canada or something, he travels to New York City to clear his name. It would seem that some crooked cops and a wealthy dude named David Englander (Ed Harris, slumming it) framed him for the theft of a giant diamond, which I believe was roughly the same plot as The Great Muppet Caper.

Unfortunately for us, Jim Henson’s charming creations are nowhere to be found. What we’re left with is the most implausible piece of horseshit “action” movie to crawl out of Hollywood in a good long time.

The film’s biggest problem (though it has plenty) is that it becomes the victim of its own premise. It’s an action movie that places its most viable action star, Worthington, on a ledge where he can’t do anything but toss money on the crowd of onlookers below him, feign jumping and chit-chat with officer Lydia Mercer (played by Elizabeth Banks), but really I can’t fault him there. By the time the story takes our man on the ledge off the ledge (spoiler alert), he’d have to kick the asses of an entire army’s worth of Predators to make up for the shit sandwich we were forced to endure for the hour or so prior.

A good action movie also needs a vile villain, and in that regard, Man on a Ledge also fails miserably. Harris spends most of the movie pensively sucking on his expensive cigar while looking out the window of his high rise. Other than walking around as if he had a stick up his ass, the only bit of orneriness he displays is when he hurls a watch a sniveling underling gave him as a suck up gift against a wall. I guess that’s kind of evil, being so unappreciative. Englander’s main crime seems to be that he’s richer than anyone else. So yeah, you know what? Fuck that guy.

Banks serves as the film’s only bright spot. Not because she’s particularly good in the role–not even Meryl Streep could have pulled that off–but because she’s the only one who seems to give a damn. As Mercer, an officer who failed in talking another jumper, a fellow cop, out of taking a dive off the Brooklyn Bridge, Banks gives it the old college try. (She also proves that movies are the only place where it’s possible to wake up with a raging hangover and still look amazing.) That effort would probably be better served elsewhere.

In short, if you go see this, you’ll probably need someone to talk you down. I hear life is so worth living. I’m just not so sure any more.