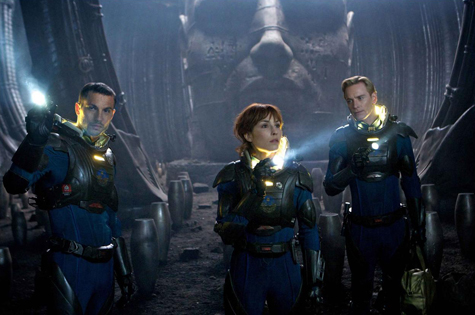 Ridley Scott’s Alien came out in 1979, perhaps before a lot of you were born. The sci-fi/horror hybrid was a truly frightening and groundbreaking film that propelled Sigourney Weaver to superstardom and birthed countless comic book crossovers and a long-lived film franchise, of which only the first two films (including James Cameron’s action-fueled 1986 sequel, Aliens) are really worth seeing. Prometheus takes us back before the beginning. It’s a prequel, a word that may have left a bad taste in your mouths after the debacle that was the prequels to the Star Wars saga. In Prometheus’ case, a look back proves to be more enlightening (and opens up even more questions) to the events portrayed in the Alien series as opposed to damaging their legacy.

The year is 2089. Two researchers, Elizabeth Shaw (Noomi Rapace, Lisbeth Salander of the Swedish-language The Girl with the Dragon Tattoo) and Charlie Holloway (Logan Marshall-Green), have patched together clues from ancient cave paintings, left by civilizations from all corners of Earth to create a map to a moon in a far-off solar system capable of supporting life. While that discovery may be monumental enough, it’s even more so because Shaw and Holloway hypothesize that this moon may have been the origin of the human race–as well as the beings known as Engineers who created it.

Peter Weyland (Guy Pierce) assembles a rag-tag exploring party to accompany Shaw and Holloway on their journey. Weyland is convinced that the Engineer theory is correct and that contact with this mysterious race of beings could answer humanity’s greatest question, “Why are we here?” Led by the icy Meredith Vickers (Charlize Theron), the party aboard the Prometheus find what they’re looking for, much to their chagrin.

Story aside, Prometheus is awe-inspiring to behold. Audiences will no doubt be left slack-jawed by the film’s bold look and stunning scenery. In most cases, 3-D seems little more than an easy way for big-ticket Hollywood films to pad their box office numbers, but much like Avatar, which really ignited the 3-D frenzy, it would be to your detriment to view Prometheus in its flat transfer. Sweeping panoramas of alien landscapes, wonderfully rendered computer effects and trippy digital-static overlays are wonderful fodder for eye-popping visuals, and Scott seems to use them to wonderful effect. Do yourself a favor and spring for the extra few bucks. 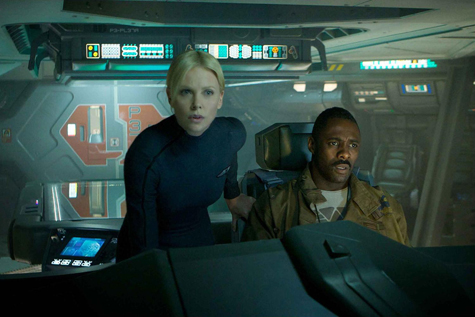 More traditional elements also enhance this feast for the eyes. H.R. Giger’s twisted cyberotica, which has been an Alien series hallmark since 1979, flavor Prometheus with terrifying notes, touching upon fears that are exotic and familiar. From the macabre marriage of the technological and organic of the Engineers’ fortress and control rooms to the freakishly vulgar creature creations, the uneasiness of the characters seems mirrored in their otherworldly surroundings.

It’s good that the visuals are so stupendous, because the film’s plot is surprisingly basic. Co-written by Lost co-creator Damon Lindelof (with John Spaihts), one might expect a dizzying story with a lot of twists and turns, but there aren’t many to be had. There are instances where we see flashes of the philosophical/spiritual mindbenders that were Lost’s trademark, but in the end, Prometheus stays true to the Alien franchise formula: humans trying to manipulate forces they don’t fully understand to their own greedy ends. There is the rich man, Weyland, who knows more than he lets on (a sort of Charles Widmore, perhaps?) and the android who seems helpful but may have its own nefarious agenda–devices that anyone familiar with these movies has probably come to expect. Unfortunately, other than a tense scene in a robotic surgery chamber, there isn’t much in the way of suspense that made Alien such a classic.

There are a couple of noteworthy performances, though. Rapace, who really gets run through the wringer in Prometheus, is the prototypical Scott heroin. Amazingly fit, she’s also tough, persistent and perhaps a bit bitchy, but she certainly upholds the high standard set by Weaver in previous films as the central character. Michael Fassbender is a wonderful antithesis to Rapace as the outwardly charming robot David, who models his appearance after Peter O’Toole in Lawrence of Arabia. Underneath his classic screen star looks is a personality more akin to 2001’s HAL9000, however.

In true Lindelof fashion, Prometheus answers as many questions about the Aliens’ origins as it poses new ones, which may be answered in another film. As beginnings go, it at the very least opens the door to a promising future.