The honeymoon is over, and it lasted seven years longer than you probably ever imagined. I’m not referring to Liam Neeson’s tenure as a respectable actor—no, not in the slightest. I’m referring to his tenure as a respectable action hero. It all started back in 2008 with the surprising success of the first film in the Taken franchise. Neeson, 56 at the time, suddenly and seamlessly transitioned from esteemed Hollywood heavy to esteemed heavy-hitter. He had always been gruff, sullen and steeled, even brutally violent (Gangs of New York), but it wasn’t until Taken that he became a full-blown hard-ass. And that’s a damn rare thing for an actor pushing 60, perhaps even unheralded. It seems that in feature films, you’re either doing that stuff by your 30s or 40s, or you’re not really doing it at all (at least not successfully). Harrison Ford toyed with it in the ‘90s, but he never really broached the straight tough-guy shit like Neeson has. With Ford, there was always a hint of duty, or civic importance (i.e. Air Force One, The Fugitive, or the Jack Ryan character). Neeson is just Joe Blow with a past, buzzing around beating the piss out of people.

And, for the record, he’s good at it. He’s big and brooding and kinda scary, and possesses an on-screen physicality that lends itself as naturally as natural can be for a man now in his early 60s. But in the last three years alone we’ve seen Neeson take the lead in two more Takens, Non-Stop and A Walk Among the Tombstones, all of which are lock-and-load action flicks, the latter being one of the worst movies I’ve ever seen in my entire life.

His latest starring role comes in the form of Run All Night, a lackluster mob thriller featuring Ed Harris in the two slot. The basic gist is that longtime hitman Jimmy Conlon (Neeson) runs afoul of his boss, Shawn Maguire (Harris), after killing his son out of the necessity to protect his own estranged kin. I could fill you in on all the details, describing the tenuous balance between Maguire and his hamfisted, I-got-ideas-of-my-own-Dad! offspring (Boyd Holbrook), or the terribly tragic you’re-a-hitman-Dad-so-I-hate you! relationship between the Conlons, but that would imply the story was worth caring about, which it isn’t. Run All Night is basically 112 minutes of mindless action cliches: hard-drinking Irish mobsters; crooked cops; honest detectives; professional killers that won’t stop until the job is done; and so on and so forth.

Oh yes, Run All Night has it all, up to and including action sequences that suspend disbelief even in the scope of bad action movies, and that oddly typical character arc where the serial-killer-for-hire reflects with remorse on a life misspent and therefore becomes honorable. 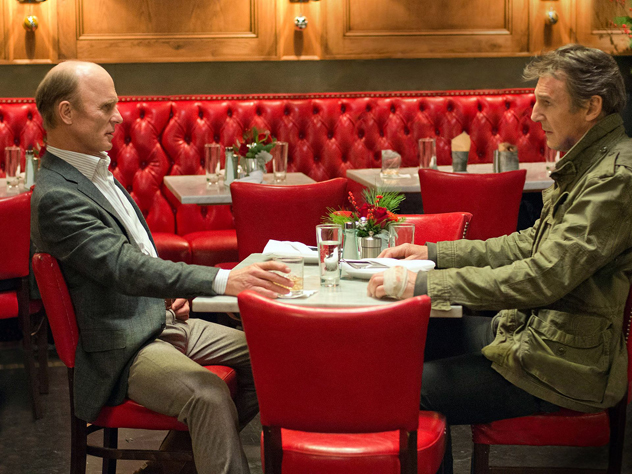 But you probably could have guessed all that on your own. The real question is where does Liam Neeson go from here? The shtick is clearing wearing thin, and after Run All Night flops, the next stop for his action hero career is straight-to-video, a place that the likes of Bruce Willis and Nicolas Cage currently reside. But if we’re lucky—and I have a feeling we are—Neeson will get back to that place that his inner Oskar Schindler calls home, or his Michael Collins, or his Priest Vallon, or Valjean, or Alfred Kinsey, or any one of the many, many excellent dramatic roles imparted over the last 25 years. And while this movie certainly reeks, it’s not as if his time spent as an action star has been devoid of merit: Liam Neeson is a certifiable Hollywood tough guy, in my book, and somehow more relevant than most brawny stars half his age.

But the jig is up. It’s time to move on. I see that he’s got a comedy (Ted 2), a dramatic fantasy (A Monster Calls) and a historical drama (Silence; Scorsese) all in the can through 2016, and that’s fabulous. So I’d like to recant my earlier testimony, and say that Liam Neeson will only “officially stink” if he continues uninhibited down this same path. Take a few years off from ripping throats, and then get all Clint about it around 70 and start crowing about the sanctitude of your lawn. That’s my plan, at least.