You’ve probably read a lot of rave reviews about this movie. You’re hearing words like “Oscar,” and phrases like “Best Picture.” Sicario is about the Mexican drug cartel. It’s directed by Denis Villeneuve (Prisoners) and stars Benicio Del Toro, who rose to permanent fame 15 years ago with his first foray into the subject (Traffic). This is the tale of an ambitious, fresh-faced FBI agent named Kate Marcer (Emily Blunt), who unwittingly joins up with CIA rogue Matt Graver (Josh Brolin) and his band of cutthroat operatives. Kate soon finds herself far from the (relative) safety of the Arizona-Mexico border, and instead deep in the violent slums of Juarez, where the lines between agenda, outcome and legality are entirely blurred. The character of Alejandro (Del Toro) is one Blunt finds particularly troubling, as Alejandro is an unabashed mercenary with a not-so-secret motive of revenge. While Kate might learn a harsh and necessary reality from Alejandro’s blood-stained ways, she cannot, however, come to grips with the morality behind it, or lack thereof.

The prevailing message from Sicario is that the war on drugs is one of futility; that conventional law enforcement and border-crossing coke and heroin busts are a waste of time. The real battle—the fight of the future—is one that takes place and will continue to take place behind enemy lines without the constraints of bureaucracy and procedure. And while all that may well be true, Sicario can’t sell it.

Emily Blunt stinks. I don’t care what anyone says. While I absolutely appreciate and applaud her casting in a role typically dominated by men, her character’s persistent self-righteous indignation is patently weak and bankrupt, regardless of gender. Same goes for her partner, Reggie (Daniel Kaluuya), whose every second of screen time is a meaningless waste. As for Josh Brolin, he tries to pull the loosey-goosey battle-tested thing: You know, sleeping on the plane ride to hell; wearing flip-flops in the war-room, etc. Those are called cliches. And while there may be hard-ass CIA operatives and combat vets that wear Rainbows on the job and talk casually about death over a 1,000-yard stare, it’s been done over and over and over and over and over and over and over to a point that an actor really has to be worth their salt in a role to pull it off. Brolin, a fine actor, cannot, nor can his crew. 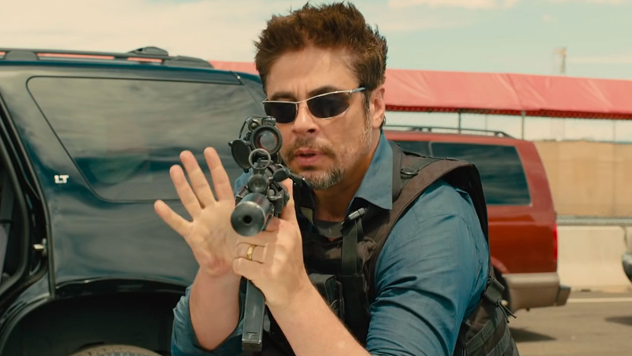 With the exception of Benicio Del Toro. That’s because he’s special. He’s not just good, or fine; he’s special. His portrayal of single-minded Alejandro is the lone glimmer of interest in a film that, aside from its cinematography and a couple long chase scenes reminiscent of Ronin or The French Connection, has little to offer in the way of a lasting impression. He has the ability to literally carry a film. But even the great Del Toro can’t save Sicario. Because there’s nothing new here. It’s recycled. More talk about decapitated wives, children dipped in acid and Colombian neckties, or whatever. There came a point when they kind of had to stop making Vietnam movies where Hollywood grunts walked around talking about “the shit,” ya know? It’s cinematic redundancy. That’s not to make light of the issue itself, or say that there isn’t value in making movies about such things. There is. Sicario, though, is just blah. It even lacks the necessary humanism to give roles like Silvio, the hapless Federale with a lonely son, any sort of depth.

And in a way, it’s unfortunate to write that about a movie at least attempting to communicate a viewpoint on an unbelievably serious and desperate situation. But Sicario is more a been-there-done-that action flick with predictable characters and plot twists than a meaningful political statement. It certainly doesn’t deserve an 8.1 on IMDB, or a 94 percent on Rotten Tomatoes simply because its subject matter is based on real-life drama. In fact by film’s end it’s basically a vigilante fairy tail. No, Sicario isn’t horrible. But it’s not great in any way. It’s just another revenge flick that happens to be about the Mexican drug cartel. 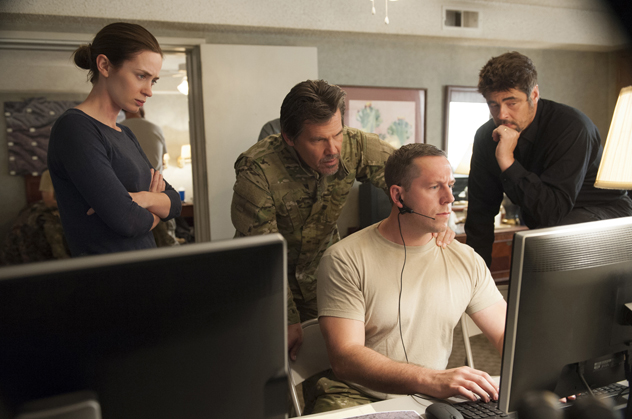