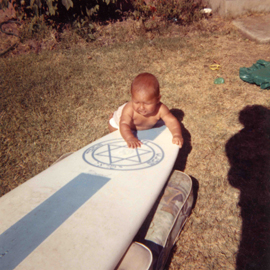 Back in 1956, Dr. Dorian Paskowitz—a Stanford graduate—removed himself from regular society. He lived without a mortgage, not tied down to any one place or occupation. He surfed beaches from coast to coast, and then some. However, Paskowitz (nickname of Doc) wasn’t a lonesome drifter. He took his family along for the ride.

With wife Juliette and nine children in tow, the Paskowitzes inhabited a 24-foot camper as they traveled across America. They lived and surfed together and stuck to a strict, healthy diet, and the children were never enrolled in school. For some, this may sound like a sort of utopian existence, but of course, nothing is that simple.

Veteran documentary filmmaker Doug Pray, auteur behind music-themed documentaries Hype! and Scratch, explores the intricacies of the Paskowitz family dynamic in his latest film Surfwise. Not necessarily a surf movie, Surfwise recounts the Paskowitzes’ life on the road and also catches up with the family—now a bit more sedentary—in the present. Pray admits that when he was first approached to make a film about the Paskowitzes, he wasn’t sure if it was a project he’d be interested in doing. But as he got deeper into their story, he became hooked.

“I’m not a surfer,” he says. “I didn’t understand why the film would be interesting, because I first misunderstood that maybe it would just be a tribute to Doc Paskowitz. But as soon as I got into the family dynamics more”¦everything turned around. It’s an incredible story about a family. It’s not even a surf movie, I mean, it is. It’s set in surfing, but it could have been in rock ‘n’ roll or anything. I got hooked on that.”

Surfwise debuted in 2007, and this past Friday, June 20, opened at the Crest Theatre in Sacramento. While wandering through Chinatown in Los Angeles, Pray answered a few of our questions about life with the Paskowitzes. 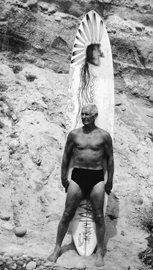 It seems that the Paskowitzes’ diet—that they weren’t allowed to eat refined sugars and things like that—that Doc was ahead of his time. Nowadays everyone freaks out about refined sugars and flours.
Totally. He is a doctor, and he was way ahead of his time in terms of preventative medicine, the idea of just taking care of yourself, making his kids eat seven grain cereal. Today, everyone’s like, “Sure, you should eat healthy grains.” But this was in the ’60s. There’s very little about Dorian Paskowitz’s medical approaches or philosophies of health that I disagree with. He was dead on the money, and he’s been dead on the money for 40 years. We do eat too much. We’re dying from eating too much, and our society is sick. We do need to eat less, not only because it helps the planet, but just in terms of health. All those things, he’s been in touch with his whole life. What’s interesting, though is that he’s such an extremist, there are so many kids, that enforcing all of that made it really quite dramatic.

Are the kids still following in their father’s footsteps?
It’s kind of mixed. They respect their mom and dad for the most part. Some of them are like, “I wouldn’t trade the experience for anything. We had the best childhood in the world.” And some of them feel as if the movie paints too negative a portrait. But the movie also is very honest about how some of the kids feel that it was wrong that their father didn’t send them to school, and that he was quite an extremist and it wasn’t very easy living in that household, even though they got to surf every day and didn’t have to go to school. It’s interesting, because I think all nine of the kids are sort of conflicted. It’s still a very close family. It’s not like Capturing the Friedmans. It’s not a very dark tale, but it’s very honest. Their recollections are really honest. They’re just a really honest family, and the movie plays both sides of that coin. I try not to decide for the audience. One minute you think, “It’s so cool what he did. What an awesome father. He loved his kids so much that he didn’t want them to get damaged by public school, and he wanted them to eat healthy. He got them in touch with nature and the ocean.” There are so many things that are cool about that that I really respect. It’s just so bold and gutsy to do that. On the other hand, there are other times in the movie where it’s like, “Oh God. I can’t believe it.” There are nine kids crammed into this little camper. They lived really poorly. They never held down a steady job. He pulled them out of society. It was like a little cult or something. 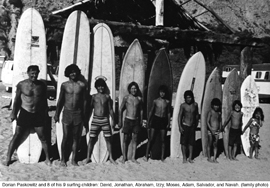 Watching the Webisodes, there were certainly some cultish undertones. Was that something you picked up on?
He’s one of these very charismatic, very dominant, leadership type characters that you run across every so often in life. Many of those people are in leadership positions or do start religions or cults or whatever. And he does have a following. Most surfers who’ve met Dorian Paskowitz think the world of him, and that’s fine. It’s not like they shouldn’t. He promotes healthy living, and he promotes surfing. That part’s all cool, it’s just how far do you go to drag your kids into your trip? Everyone who watches the movie has a slightly different take on that.

I’ve spoke to other documentary filmmakers, and they’ve said that editing is the most important part of the process. Is preserving that sort of ambiguity one of your biggest concerns when working with an editor?
Yes. All my movies, I’ve always said is 90 percent editing. That’s not to take away from the cinematography or the interviews. If you don’t have that, you don’t have anything. But editing is huge in telling the story in a documentary, because you’re presented—in my case—maybe 100 hours of material, and it’s a question of striking a balance. It’s saying, “A movie has to be a journey. Where do we begin the movie and where do we end the movie? What kind of journey is the audience going to go on?” It can tip over at any one moment. There’s a lot of really intense and some funny scenes in the movie, but if it goes too far in any one direction, it can tip over. If the movie focused too much on just Dorian, then all of a sudden we’re missing out on the kids, and the kids are wildly entertaining. To me they’re the heart of the movie.

There are other themes about sexuality, and how you share that with your family, and that could’ve been a bigger theme in the movie. There’s also a lot of talk about religion and Judaism and the Holocaust, and that could’ve tipped it over. It could’ve become a Holocaust movie, which I guarantee would’ve been the first surfing Holocaust movie ever. Not to make light of it, but you know what I mean. We spent almost a year in the editing room balancing it out. It was extremely difficult, but I’m proud of it. My editor did a great job. It’s like writing a novel. You have all this material and you just try to shape it. 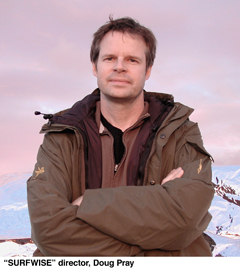 The movie premiered in 2007, but another movie of yours, Big Rig, was completed around the same time”¦
Yeah, they’re totally unrelated, but the timing was really”¦very odd. Big Rig was released this month, and it’s all about truck drivers. We’re doing a truck stop tour this summer, and it’s being shown free to truckers all across the country.

Were there shooting conflicts?
[Laughs] I would literally go from a truck stop in Alabama and get on a plane and go to Hawaii. My brain was completely screwed up—truckers and surfers. I must say that they do have some similarities. Surfers are independent-minded people, and so are truckers.

How do you think the Paskowitzes have adapted to life away from the camper?
Well, Dorian and Juliette have lived pretty much the same for 40 years. They’re still very poor. They live a very meager existence. They live in an apartment and Doc makes all his money from selling his books. He still eats totally healthy food and surfs as much as he can. He’s getting up there. He’s like 80 now. He’s in his late 80s and he’s extremely healthy. He doesn’t take any medicine. He lives his life strictly according to his principles, and so does his wife. Their kids are all grown now, so they do [live according to Doc’s principles] to varying degrees as much as they can. I think they’d all like to be as healthy as Doc”¦and so would I, by the way.

I’d read on your Web site that you had never listened to Pearl Jam before making Hype!, and that you’d never scratched a record on a turntable. You’ve already mentioned that you’re not involved with surfing. Do you get influenced after making a film like Surfwise to participate in the culture you’ve been learning about for so long?
A little bit. More of what it does is give me an appreciation for those areas. For the rest of my life, if I run into a truck driver, I can talk to him or her. That’s the thing I love about my job so much. I get to drop into these cultures and meet a lot of people—many of them become my friends and I keep in touch with them long after. I feel kind of spoiled. The downside of it is that I more tell about those cultures and I don’t really live them. It’s more vicarious. I get to observe and meet these people, but I don’t become them because that would be phony. It’s just not me. It’s not the purpose of my movies. 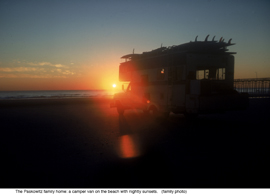