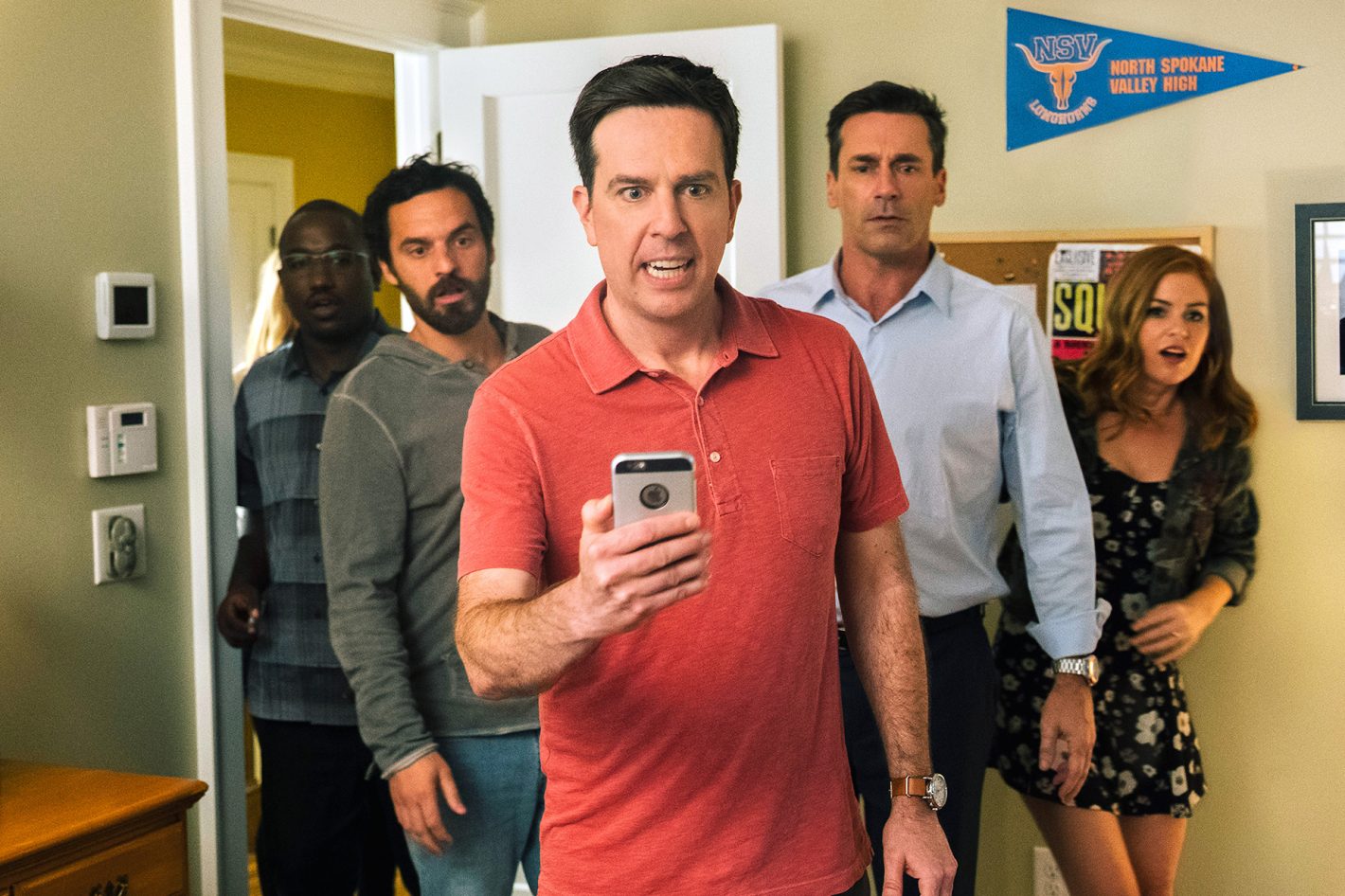 This quote is repeated ad nauseum throughout director Jeff Tomsic’s Tag, which hit theaters on Friday, June 15. The idea that play can improve the lives of both kids and adults alike is at the heart of the film, and is pretty much the only reason why anyone would think to make a feature-length film about adults playing tag. Yet, Tag’s communication of this idea isn’t always clear.

Tag is, amazingly, based on a true story that appeared in the Wall Street Journal about a group of men who have been playing a game of tag for 23 years straight in order to keep in touch. Every May, they engage in a no-holds-barred pursuit—disguising themselves, hiding and lying in wait to ambush their fellow players. Whoever remains “it” by the end of May has to live in shame until the next year.

Like any good homosocial bonding movie, Tag contains the full constellation of bro archetypes. Callahan (John Hamm) is handsome and successful, but arrogant and insecure. Hoagie (Ed Helms) is your nerdy, well put-together and earnest 30-something, while Chilli (Jake Johnson) is a loser stoner who lives with his parents. Sable (Hannibal Buress) is chubby, schlubby and funny (he gets most of the movie’s best lines), and Jerry (Jeremy Renner) is the aloof, competitive, cool one who has never been tagged once. There’s even a lesser known role: girl-bro, filled by Hoagie’s intense, hyperphysical-but-fun wife Anna (Isla Fisher).

Essentially, each character is just another iteration of their respective actor’s most typecasted on-screen personas, and while Callahan might as well be Don Draper minus the misogyny and alcoholism, it was surprisingly funny to watch him revert to childlike ridiculousness, attempting to throw a desk chair through a conference room window when cornered.

The film’s main bid for laughs is shooting action movie scenes juxtaposed over otherwise banal adult situations. For instance, it’s Jerry’s wedding when the rest of the gang comes calling, so watching a grown man dive off a country club deck and hijack a golf cart is only made funnier by the knowledge that he’s ditching his own rehearsal dinner for a game of tag.

There’s also a few references to other action movies thrown in here and there. Jerry’s savant-like skills are represented with a Sherlock Holmes-esque slowing of time matched with his own interior tactical analyses which are, again, made funny because it’s all about tag. However, while this gag was funny the first time, it starts to go a little stale after each frustrated attempt to trap him.

But where Tag really falls flat is its non-physical bits. While there are a few good lines thrown in here and there (Buress, with his deadpan delivery, was by far the most consistent), a majority of the movie’s jokes are more miss than hit. There’s really only so much you can laugh at how much weed Chilli smokes, and by the fifth time that Anna gets a little too fired up about her husband’s performance, I found myself wishing she would tone it down a little. There was also a B-plot where Callahan and Chilli fight over a hometown grade school sweetheart that frankly felt a little tacked on.

But what really left me scratching my head when the credits rolled was Tag’s attempts to lend its plot some seriousness. Without spoiling anything, there’s a big reveal in the film’s final 15 minutes that makes the group realize this might be the last time they’ll ever play together. While the idea of embracing the inner child to deal with adult life’s difficulties is touching, you have to wonder how seriously audiences will take that point when the group has faced zero consequences for their actions for the entire film. I mean, they destroy property left and right, and at one point almost waterboard a dude. Yet, no one even so much as gets angry with them. In fact the whole of the film’s universe seems engineered to facilitate these man-child activities. And it really doesn’t help the movie’s case that all its women are either endlessly supportive of the game, or have an eye-rolling, smiling, boys-will-be-boys attitude about it.

That being said, Tag is a pretty OK action comedy that embraces its own silliness. And that, I can respect.