Saving the World Just Got Messier 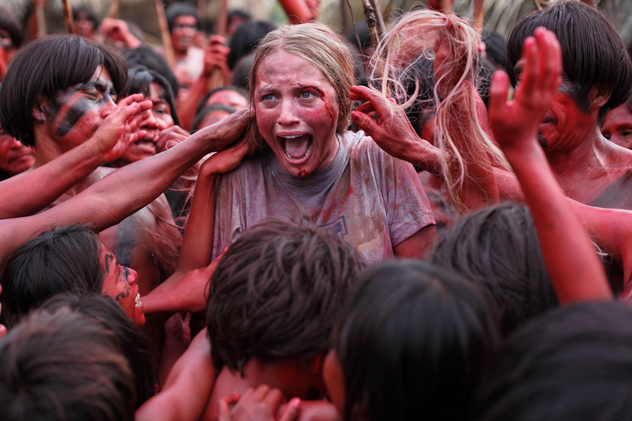 The film opens with Justine and Kaycee being awoken by the emphatic sounds of the campus’s Activist Change Team (ACT), led by Latin heartthrob and “life changer,” Alejandro (Ariel Levy) and his fiery (and territorial) sidekick/girlfriend, Kara (Ignacia Allamand). Kaycee and Justine lament over ACT in the beginning, cursing them for waking them up early and calling them “poseurs” but soon, Justine is overtaken by the lust in Alejandro’s eyes and she has a sudden urge to help save the world. And thus, all hell breaks loose.

Flash forward and these college students, still with innocence and stardust in their eyes, are travelling to Peru to stop a big-name oil corporation from destroying the Amazon and the native tribes that still reside there. They disguise themselves in the same uniforms said big corporation oil guys are wearing, put on masks so that they are all “one face,” chain themselves to the bulldozers and whip out their phones, the Millennials’ weapon of choice. Alejandro even says, “These are our guns!” and, “Never stop streaming,” recording all the action so that they can go viral on the Internet. Soon, there are guns in their faces courtesy of the Peruvian militia, but they walk out alive because of Justine’s status (did I mention that Justine’s father is a lawyer for the United Nations?). You can probably figure out the twist at this point. Everyone (except for Justine, of course) is celebrating on the plane ride out because they’ve gone viral and, OMG, CNN retweeted them, when, in the greatest irony, their small plane goes down and they land in the middle of the Amazon among a native tribe that does not want them there. 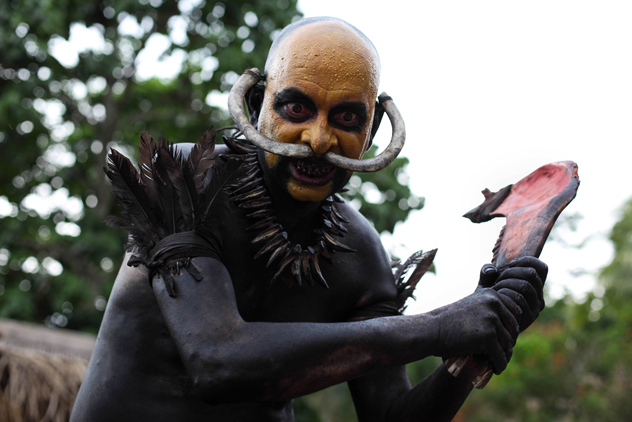 OK. So, here is where you have to start suspending your disbelief, any knowledge of cultural accuracy, and get yourself ready for a typical Eli Roth kind of horror film (keep in mind, this is the guy we have to thank for the Hostel franchise). Anyway, they land in the Peruvian Amazonian rainforest with this uncontacted native tribe (most likely based on the real life Awá peoples of Brazil) and things go from bad to worse.

Their plane and several of their compadres are ruined in a fiery, horrific and very gory accident. The ones who have survived think they will be saved because they hear rustling in the bushes but, wouldn’t ya’ know, the same uncontacted tribe they were trying to “save” (you’ll get those quotation marks if you see the movie) instantly become their demise (and also, this tribe are cannibals).

From here, the movie just becomes a total bloodbath for bloodbath’s sake. There are lots of vivid killings with spears, limbs being chopped up (because Hostel) and, of course, plenty of cannibalism for your taste buds (see what I did there?). Luckily, Roth decided to include some comic relief, because the killings and cannibalism start to become rudimentary and cliché.

I wouldn’t say that this film was scary but it was definitely gory. It was basically a classic shock value horror film. Obviously, this film isn’t really kid-friendly (unless you want to ruin their lives and give them nightmares about cannibals coming to eat them in their sleep). And, honestly, you can probably just save yourself the $11 movie ticket and wait for it to come out on Netflix. It wasn’t a bad movie (trust me, I’ve seen worse in the horror genre) but it wasn’t a particularly good movie either. But, if you’re an extreme horror buff like me and see every horror movie that comes out, good or bad (mostly bad), then this won’t be a complete waste of time. Oh, and the fact that they left it open for a sequel at the end kind of killed it all … because there does not need to be a sequel to this film.