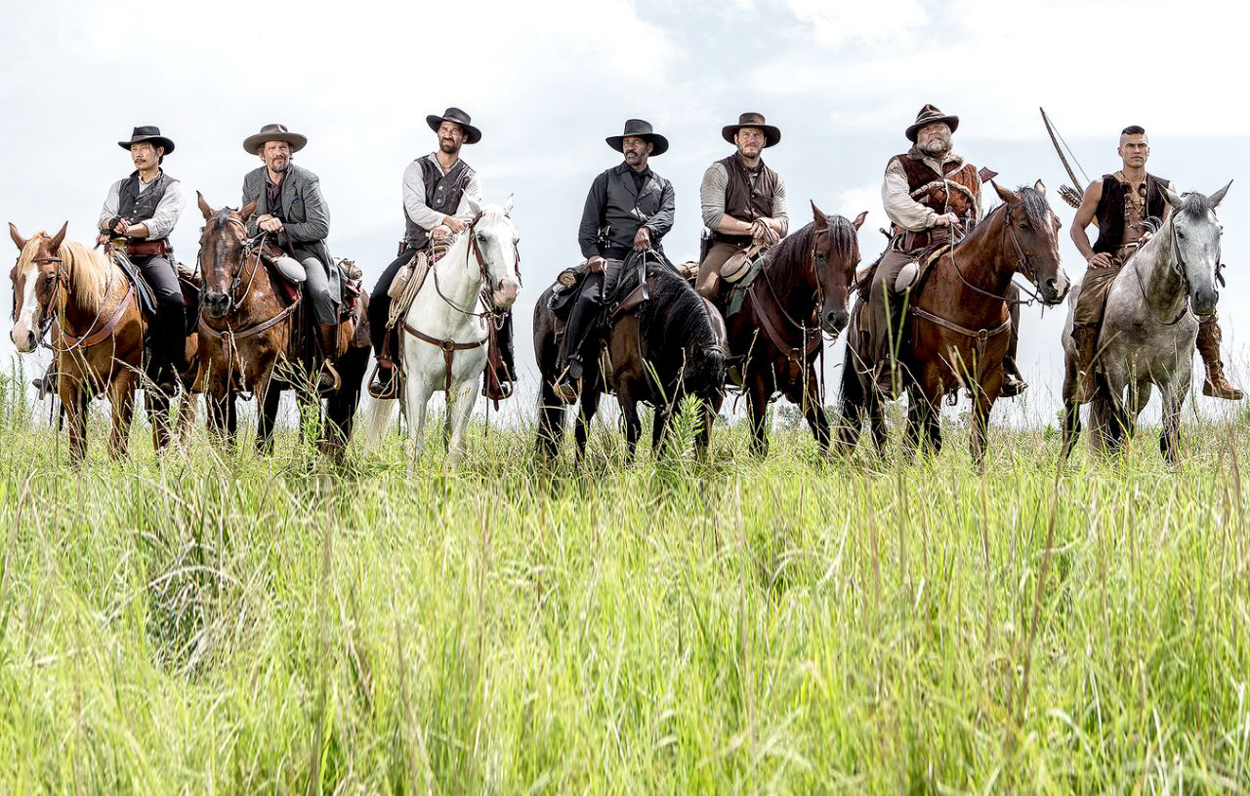 When Akira Kurosawa directed Seven Samurai in 1954, he had no idea how influential his tale of heroes inspiring regular folk to stand up to bullies would be. Followed by The Magnificent Seven in 1960, Battle Beyond the Stars in 1980, A Bug’s Life in 1998 and Bernie Sanders’ presidential campaign in 2016, it’s a story we don’t get tired of seeing. Training Day director Antoine Fuqua’s new version of Mag 7 is an enjoyable addition to this legacy that isn’t the best attempt, but is a fun way to spend a couple hours for any western junkie.

At 61 going on 40, the age-defying Denzel Washington shines as Sam Chisolm, a deadly gunslinger who’s recruited to save the town from evil gold baron Bartholomew Bogue (sleazily played by Peter Sarsgaard). In the opening scene, Bogue and his men burn down a church and kill innocent people who don’t want to sell their land for $20. He’s a good, understated bad guy who is believably motivated and doesn’t cross over into being a cartoon.

The team of heroes Chisolm puts together is a diverse and fun bunch of dudes that includes Ethan Hawke as the marksman Goodnight Robicheaux, a Comanche warrior named Red Harvest played by Martin Sensmeier and a brilliantly bizarre bear of a mountain man brought to life by Vincent D’Onofrio, whose squeaky voice and husky frame chew up every scene he’s in. Lee Byung-hun (who played Storm Shadow in the G.I. Joe movies) is particularly good as an assassin, who wins a duel by throwing a knife into his opponent’s chest before he can even squeeze the trigger. 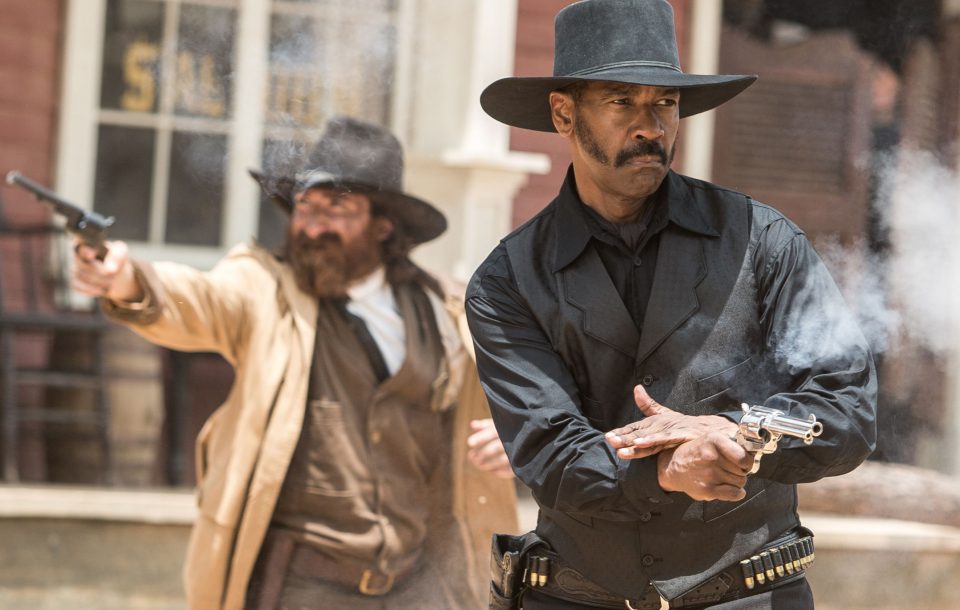 If Suicide Squad was a western, and a good movie, you’d have The Magnificent Seven. This cast of characters is every bit as engaging as the better superhero movies out there.

I wanted a lot more scenes between Washington and Hawke. Their chemistry in previous work (i.e. the aforementioned Training Day) was great, and they don’t have too much to do together here. Hawke looks absolutely tortured, wrinkled and scuzzy. I’d love to see the backstory between their characters, a black gunslinger and a rebel soldier, played out more in another film.

Surprisingly, the weak link in this movie is Hollywood darling Chris Pratt as Josh Faraday. His wisecracking, wink-at-the-camera-before-firing-his-gun persona provides too much levity in a film that doesn’t need it. He doesn’t have a big range, and it seems like he’s just doing his Parks and Recreation character Andy through much of this. Every minute he’s in the film, Pratt exudes an “Oh my God, I’m in a cowboy movie!” presence that just doesn’t work. It’s more or less the same performance he gives in every other film he makes. 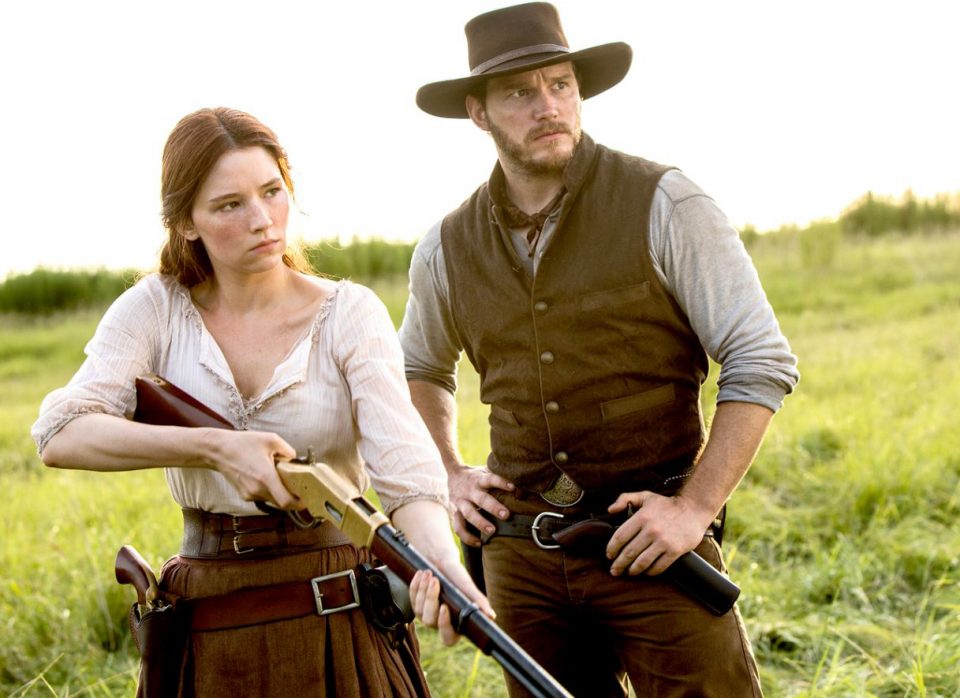 It’s good, dumb fun and has an exciting climactic battle scene that has more broken saloon windows, collapsing horses and people falling off roofs than any western I can remember. The body count at the end of this thing has to be in the hundreds. If you ever wondered what a Mel Gibson-directed Gunfight at the OK Corral would be like, this would be pretty close to it (minus the subtle anti-Semitic undertones).

The cinematography and the sets are gorgeous, and everyone has the right amount of dirt and sweat on them to make everything a bit more believable. There’s an establishing shot where Chisholm rides into town, a black cowboy dressed in black, that gets the right sense of menace going. The saloon shootout that follows is gorgeous.

A surprisingly bloodless and curse word-free affair, the film manages to keep it PG-13 without making it feel like a watered down family film. I’ll watch just about any western, and damn if I won’t stop everything I’m doing when Tombstone shows up on TV every single time, so take that as you will. It’s not the worst, and it’s not the best cowboy movie, but until they make a Deadwood film or the next Red Dead Redemption game comes out, I’ll never be truly happy.